The Left Self Analysis = we are middle class capitalist lackeys 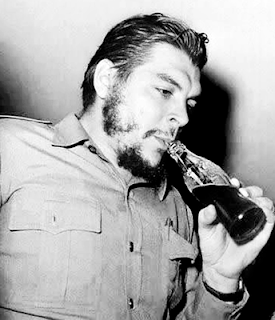 Image - Che Guevara drinking a bottle of coka cola, symbolic of socialism being fed by capitalism.


The left admit that they and their 'elite' of middle class academics and parasites of the Servile State are lackeys of capitalism working to ensure the perpetuation of their ranks and priveliges, whilst the workers are used as cattle.

What used to be called a form of ' Economism' where the trade unions and socialists deliberately sought to keep the working class poor in order to create a radical base of activists for them to use as part of the process of Dialectical Materialism, is now a form of Capitalism - http://en.wikipedia.org/wiki/Economism

Trade unions were used not to empower and assist the working class but to keep them in poverty in order to ensure a radical alienated mass who were one day able to be brought to revolution.

The aim of the trades unions is not to help workers, but to ensure they serve the unions and the left and the labour party, and to keep their parasite trade union bosses and functionaries in wealth and power.

We have the worst of all possible worlds - political correctness in the public sphere controlled by the Servile State and Capitalism dominates the private sphere destroying freedom for consumerism.

At all sides the individual and individualism is denuded and attacked both by capitalism and its whore sisters political correctness and liberalism.

The Left and Right are dead - there is only the capitalists and NATIONALISTS.

The only revolution is NATIONALISM !

Comrades of the National Revolution, the struggle for power begins.


The left groups are made up in the main of social layers drawn from the public sector and academia, many of whom have secured positions within the apparatus of the trade unions which they view as the guardians of the material and political relations on which they themselves depend. Their leftist rhetoric, including the occasional invocations of revolution, were and are always directed towards urging the working class to put pressure on the labour and trade union bureaucracy to more energetically defend wages and social conditions.

Thus they offered themselves only as political advisers to whatever might pass for a leftward section of the bureaucracy? anyone who still made noises about securing social reforms in order to maintain a level of support in the working class. Their new parties were to be an alternative home to the Labourites and trade union leaders who they anticipated would be forced to break from Labour by the “pressure from below”.

The essential reason for the failure of their various initiatives is that no such break has occurred.

Labour’s evolution was not the product of a few bad leaders, but the impossibility of any longer combining an advocacy of social reform with the entire bureaucracy’s essential function as defenders of the profit system. With the bourgeoisie everywhere seeking to claw back previous social concessions and compromises in order to compete for global investment and markets, the highly privileged strata represented by the bureaucracy translated this into a series of policies and political imperatives based on the insistence that socialism had failed and that the market could not be challenged. With a few complaints, the entire bureaucracy moved ever more firmly into alliance with big business—with the so-called lefts managing to reconcile themselves to a government just as far to the right as the Conservatives economically. Even the Iraq war and the mass opposition to it led to only one (enforced) defection from Labour’s ranks by a national figure—Galloway. And despite the occasional threats to redistribute the political levy, the trade unions continue to overwhelmingly fund Labour.

All good stuff to help us try and understand what has happened on the political scene since the fall of Soviet Communism.

It is manifestly apparent that the overwhelming majority of the voting public is not aware of this transformation, all no doubt due to the relentless promotion of the illusion of political choice by the media.

Surely, it cannot have gone unnoticed (among the cognisant) that television and journalists are endlessly trumpeting and contriving every conceivable scenario of Cameron or Brown, Tory or Labour, ad nausea, and it is proving immensely successful.

It is no surprise therefore that the voters of this nation are investing their trust in the illusion of choice by voting for David Cameron in the next general election. Cameron, (who I suspected from the start) will become our next prime minister.

It is my contention that the scale will fall very early in the tenure of boy David, it is then and only then, will nationalism be looked upon as a genuine alternative.