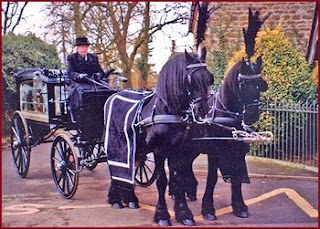 Today I saw a beautiful funeral cortage led by four black horses, as I watched it pass the first few lines of this poem appeared.


Death is seldom dignified,
For as the wave abates,
The body breaks upon the shore,
And scatters all its contents,
As seeds seethed from a willow reed,
Are feathered soft upon the wind,
Then drift and tumble drunkenly to earth,
Or as fiery stones from space,
Scatter scarlet sparks,
In their wake upon the world,
The husk must reveal all of its secrets,
Before the final journey can begin.


Nature will stake its claim,
Upon the ebbing tide,
But first must come the sacred ceremony,
The rituals of passing,
Where pale beauty and dignity,
Cloaked in solemn robes,
Attend to the infant dead,
And usher them once more,
Across the rushing river of rebirth.


Past The Angel on Strood High Street,
In the cold gild of an October morn,
Came a clattering funeral cortage,
Led by four Belgian Black horses,
Pitch dark as carnauba boot polish,
Coats shiny as parade ground buttons,
Manes that flowed as liquid tar,
Over napes of carved ebony.
Upon their forelocks each wore a panache,
A plume of black ostrich feathers,
Fountains of ink that fluttered,
With each delicate nod of the head.
Bridled and tacked with straps,
Of polished leather and silver buckle,
The trace, girth and breeching,
Harnessed and put to pull the hearse,
Swept as a storm around the corner.


The clip, clop and clatter of their hooves,
Upon the road brought forth a spark,
That like life itself rose, flared and faded,
Then fell anew into nothingness.
Granddad in white flowers was spelt out,
In bunches behind the funeral glass,
Of their hearse of burnished blackwood,
That glittered with silver filigree,
Whose wheels of wood, spoke and felloe,
Turned as travelling suns,
From East to West unceasing.


Whilst in its simple box of oak and brass,
The husk that remains awaits its root,
Its turn to sink into fresh turned soil,
Sliced with boots and shovel blades,
And nestle in its soft nest of earth,
Amidst the dark, dank, embrace of eternity,
Before each soul returns anew to its Otherworld,
where from whence it first arose,
Restoring to its rightful realm,
The life which has fled its limpid limbs,
Which fate had merely sought to borrow.
Now only a ghost lingers in the mind,
Of all those that are left behind,
As memories of moments in scrapbooks,
Are pasted upon a page to be passed on,
For as winter strips the branches bare,
So must each fragile bud of breath,
Fade and fall in its turn, to rest at last,
Ablaze amidst the infinite stars.


Death has precious little dignity,
Except that which we gift the dead,
The corpse is cold and ash grim grey,
So what care the departed for such things,
As rituals and sacred ceremonies.
No, it is we alone who are left care,
Forced to live with our memories,
And bear the burdens of such cares,
We who tie black ribbons on a wreath,
And erect the stone cross to remember,
Who follow the hearse in silence,
Sombre in black suits and ties,
To give honour and dignity to the dead.

Posted by Defender of Liberty at 09:10