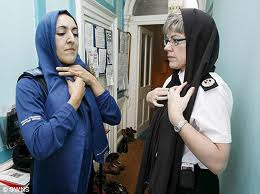 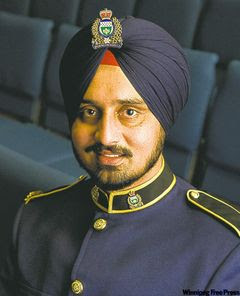 When immigrants enter Britain, they must come to integrate not colonise.

Therefore if they wish to join public institutions like the police then they must demonstrate their respect for British culture and respect for the majority population and history of Britain by adhering to our norms, not imposing theirs.

Therefore they must integrate into our society, not we surrender our culture to accomodate them.


( The bits about the illuminati and jewish central bankers in the article below are bug bears of the author, which I disagree with as the bankers of the world are not just Jewish - wherever greedy men are in the world then a banker is born so they are of all races and all religions - and the illuminati do not exist, but the globalists do. The article is interesting for what it says about diversity, not the conspiracy theories)


You'd be forgiven if you thought Gurvinder Singh Chal, 35, (above) belonged to the Punjabi Police Force.

In fact, he's the latest recruit to the Winnipeg Police Service.

He wears the turban "for cultural and religious reasons" and, with the blessing of Chief Keith McCaskill, it'll be part of his standard uniform. It's a "symbol of Diversity."

The former 7-Eleven clerk has been in the country for just three years but his cultural needs trump those of the 136-year-old Winnipeg Police Service. Apparently the WPS has no cultural tradition worth preserving; its uniform has no significance whatever.

The move isn't uncommon in Canada, with Sikh officers in cities such as Ottawa and Vancouver wearing turbans. We have no cultural identity in Canada. Perhaps this is the reason.

I hope the Filipinos, Somalis and aboriginals who make up Winnipeg's rich cultural mosaic also will be able to modify their uniform.

I expect that if I were 35 again and joined the Punjab police, they'd let me blow off the turban and wear a Jewish skullcap or Mountie hat.

I'm sure I could take Saturdays or Sundays off to celebrate my religion. To help me remember my homeland, they'd allow a Beaver Insignia and Tim Horton's logo on my uniform. That's multiculturalism!

And I expect that if 20 million people of European Christian extraction moved to the Punjab, they'd move heaven and earth to ensure we got our proportionate share of good jobs.

I know Punjabis value "Diversity" as much as we do.

[This is where I insert my Disclaimer: I like racial minorities. I like their restaurants and cooking. They have strong family values and this is more important now than ever. I was married to a Filipina for two years. I am not a racist in the negative sense.

I'm all for people being treated fairly. That means hiring on the basis of qualifications and ability, not quotas for color and gender.]


This article is just to marvel at the stupidity of the fast-shrinking European majority and the perfidy of the traitors who pass as their "leaders."

I am all for having racial minorities but it should be obvious that "Diversity" is a ruse. Europeans are being sweet talked out of their national birthright. They're fast becoming the next minority in Europe and North America and, with all the guilt trips, I'm not sure they'll be treated with the same "tolerance."

Apparently Jews can have a country where they are the majority and set the cultural standard. So can Indians, Arabs, Africans, Japanese and Chinese. But Europeans cannot.

Europeans have a sense of political and economic entitlement, and represent the last potential resistance to Illuminati control. They have vestiges of Christianity, the thing the Illuminati hate more than anything. According to Christianity, man has a Divine soul; they obey God and thereby become more God-like. The Illuminati see people as animals trained to obey them.

Many "minorities" and "women" are beholden to the Illuminati who put them in power. They are their trained seals.

Were "Multiculturalism" or "Diversity" ever major election issues? No. They were never debated. They entered the world in the form of "political correctness.' To question them exposed you to charges of bad taste and racism.

Multiculturalism and Diversity are social engineering programs introduced by the Illuminati (Masonic Jewish) central bankers. They are designed to change the European and Christian character of Europe and North America. They prevent us from maintaining and celebrating our cultural identity and traditions. Take school prayer for example.

Similarly, feminism was an excuse to undermine marriage, heterosexuality and males in general. The school prom, virginity and even courtship went the way of the dodo. Marriage and birthrates plummeted.

Dunce_Cap.jpgEuropeans have been sweet talked out of their national birthright. Our politicians work for the corporations or unions which are all controlled by the central bankers. They're not our leaders. They're our managers at best. Chief McCaskill and all the other clarions of "Diversity" are of the same ilk.

And if you're feeling resentful, don't blame the minorities. Let's blame ourselves and our so-called leaders -- the politicians, pastors, academics and pundits who sold us out for a profit to the Illuminati bankers and their satanic New World Order.

Posted by Defender of Liberty at 02:01

you are dead right, but how far does 'intergration' go? to the point all our British women are Jamaican ghetto queens or burkha brides?

I think that scenario belongs on an episode of Star Trek or 'British Nutters' dont you.

Yes that's certainly where it belongs!!

But to my horror I'm noticing the media/establishment's interpretation of racial 'integration' in all kind of places, such as entertainment

My mind has been raped.