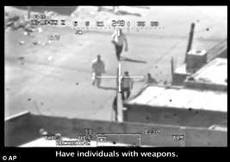 In her book Blood Rites Barbara Ehrenreich makes the point that in the past 90 % of casualties in wars were combatants, but in the era of high tech warfare 90 % of the casualties are now civilians.

This is due to the nature of war being dominated by technology which makes it easy to kill, unlike in the past where hand to hand combat meant men were reluctant to kill.

This is a poem about the new type of war.

The lines are short, almost like a rap song which is the soundtrack of modern warfare or the jingle of an advert for a video game.


It is easy to take a life,
In hi-def black and white,
On Kill Cam.


Just images on a TV screen,
You can never hear them scream,
On Kill Cam.


When we fire all our guns,
It makes murder so much fun,
On Kill Cam.


Return to base, reset, reload,
Massacre them all in silent mode,
On Kill Cam.


Those we shoot are not people,
Just clumps of moving pixels,
On Kill Cam.


We never feel any shame,
For winning every game,
On Kill Cam.


Today I got my highest score,
God, I love this war,
On Kill Cam.