What To Do When Griffinites Attack 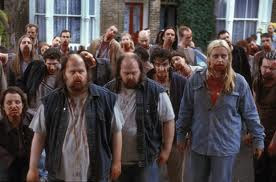 Image - The Griffinites Attack ! Here we see a group image of the Green Arrow and his zombie army of attack Zombie maggots.

The instructional film here applies primarily to Zombies, though of course Griffinites are a sub species of the Zombie community and hence the techniques in this video can apply as well as to Griffinites as Zombies.

The techniques can also apply to all sorts of brain dead idiots on the internet such as Griffinite sock puppets on the BDF Forum, deformed genetic dwarf freaks like Sean Hadley and raving nationalist zombie nutters like Sharon Ebanks.

Remember though, as they are Zombies do not expect to debate them into embracing common sense, for the nature of the Nationalist Zombie and Griffinite is to forgo logic and reason for cult like devotion and stupidity.

The butlerites or the so called refomites are just as bad as the griffinites on the BDF. In fact they are worse.

You are nothing but a hypocrite yourself barnes. You where once part of the griffinites and now you have jumped on the band wagon of spreading rumours and half truths.

Paul Morris and Ronnie White (Bertie Berk lol) are nothing in the grand scheme of things.

They are simply a destructive factor, trying to raise beer money via PayPal.

Real activists are trying to win this country back whilst these pair of muppets try to destroy real nationalists.


Maybe the location of Paul Morris's caravan should be released into the public domain?

Heres me thinking with dowsons exit the pathetic begging letters would cease...

Besides resigning from the party is there any way of stopping this torrent of junk mail?

Mr Barnes you are a zombie that got conned by reds pretending to be Nationalists to create another party and thus try to cypher off BNP supporters.
The elite must be loving the British freedom party. give it a few months down the line and the media will be hyping it up.