The Boris The Clown Sweepstakes 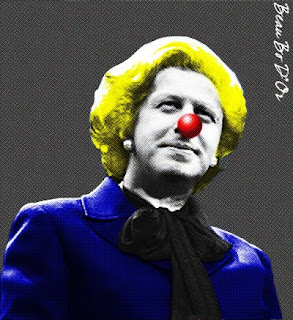 Ladiesd and Gentlemen welcome to the Boris The Clown Sweepstakes.


Here we bet on the first serious cock up of Boris Johnson in office ;


C) Is he found drunk at the GLA building asleep in a hedge outside, punches the office cleaner, throws up over his desk and is filmed urinating in the plantpots in the London Assembly chamber


D) Does he have an affair with any women pissed enough to look at him sideways after drinking a bottle of vodka, snorting three grams of coke and necking a couple of ecstacy pills


F) Does Boris wake up one morning and think 'bugger this for a real job' and decides to quit to take up more usual aristocratic pursuits such as butler sodomising, drug addiction and pederasty


G) Does Boris reveal that he only stood as ' a bit of a laugh' and then hand the job over to his horse and then decide to take up the fiddle and develop an obsession for pyromania.


H) Does Boris reveal that he and David Cameron have been bum chums since their Bullingdon Club days, divorce their wives and enter into a civil partnership and turn the Tories into the Rainbow Gay Conservative Alliance Party


I) Does Boris go into Red Kens office, open the cupboards and is then crushed to death by an avalanche of whisky bottles resulting in his tragic death


J) Does Boris smoke one of the cigars from the box of cigars given to Red Ken by Fidel Castro and left by Red Ken on his desk, then his hair falls out and he decides to quit politics and join the Grateful Dead as their new singer to replace Gerry Garcia


K) Does Boris order the GLA to all wear clown suits and instead of asking formal questions, the best shot with a custard pie gets to wear the big red nose and big clown boots for the day and then be the boss for 24 hours

The winner gets to be known as a smart arse.
Posted by Defender of Liberty at 08:23