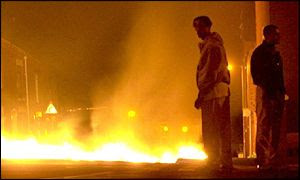 Image - Oldham riots. Is this Britain ? NO - this is THE WASTELAND.


What is that sound high in the air
Murmur of maternal lamentation
Who are those hooded hordes swarming
Over endless plains, stumbling in cracked earth
Ringed by the flat horizon only
What is the city over the mountains
Cracks and reforms and bursts in the violet air
Falling towers
Jerusalem Athens Alexandria
Vienna London
Unreal

The article below reveals just how much the government thinks the British people are mugs, and judging by the fact that a large percentage of the brain dead British people who are left behind in the country keep voting for the scum establishment parties - they are right.

The people who still vote Labour, Tory and Liberal are mugs.

Its like watching turkeys voting for christmas year in and year out.

They wont learn until it hits them personally.

That time though is fast approaching - the credit train is about to come off the buffers and all those mugs that kept on voting for the old parties are about to have a rude awakening.

The moral of this story is clear - ONLY MUGS VOTE LIB, LAB, CON !

The real tragedy though is this - I live in a village and I have watched two generations of my mates leave the country and move abroad.

The ones who have moved abroad have all been the ones with drive and determination to suceed and most of them now run their own companies in Canada, Thailand and Australia. About 14 of my mates have got nightclubs, bars, estate agents and property firms in Thailand and are millionaires.

Those lads should have been able to do as well as they have done over there as over here.

Instead we have seen millions of our brightest, best , hardest working people leave this country in order to fulfill their potential abroad - and in return we are shipping in millions of under educated, unskilled, unwanted slave labourers enter the country to replace them.

We are swapping quality for dross - and this process of the brain drain is going to accelerate our nations economic and social collapse.

The economy cannot grow when the people with the skills and drive have already gone and left the country - it will merely collapse faster and faster.

The crunch point is coming - and the faster it does the better.

The sooner the shit hits the fan the sooner we can get to work and restore this nation back to what it should be.

First comes the Winter, then follows the Spring.

A raft of statistics released by Whitehall revealed 164,635 foreign nationals were granted UK passports in 2007 - the equivalent of one every three minutes.

The figure is up seven per cent on the previous year and takes the total since Labour came to power to almost 1.2m.


But, while increasing numbers of foreign nationals opt to make a new life in Britain and naturalise their status here, UK citizens are heading abroad in record numbers.

More than 200,000 British citizens left the country in 2006 as emigration hit record levels.


Nearly one in three went to live in Australia or New Zealand. A quarter went to Spain or France, and around one in 12 went to the United States.


The rising rate of emigration meant that nearly 1.6 million Britons left the country to live abroad between 1997 and 2006.

The increase in the number of passports being given out comes despite Government attempts to make it harder for migrants to 'earn' the right to live here permanently.

At the end of 2005, the controversial 'Britishness' test was introduced - forcing foreign nationals to take a short multiple-choice quiz before citizenship was granted.

It was predicted this would lead to a drop in numbers, but while there was a small fall in the number of grants made in 2006 - the first full year of testing - last year the total number of migrants having their cases approved surged by seven per cent.

The mountain of statistics released today also contained bad news for the Government on asylum.

There was a 16 per cent rise in asylum applications in the first three months of this year, to 6,595, compared with the same period in 2007.

The number of failed asylum seekers deported from January to March was down 13 per cent to 2,805.


It means the total number of failed asylum seekers living in the UK - which already stands at 285,000 - is likely to have continued to grow.

The Home Office opted to focus on a fall in the number of arrivals from Eastern Europe, revealed in yet another statistical release.

The numbers arriving to work from the former Eastern Bloc was down by around 12 per cent to 45,000 in the first three months of this year - the lowest level since the start of 2005, when the influx began to gather pace.

The number of Bulgarians and Romanians applying to work in the UK has also dropped to its lowest level, with 8,205 applications in the first three months of this year, compared to 10,420 in the same period last year.

It is likely to fuel speculation that, as the economies of the former Eastern Bloc improve, and Britain faces uncertainty caused by the credit crunch, would-be migrant workers are instead opting to stay home.

Commenting on the asylum figures, Border and Immigration Minister Liam Byrne said the overall number of foreign nationals being removed was improving.

He said: "People in Britain welcome legal migrants who work hard and play by the rules.

"But we will not tolerate law breakers, which is why we will prioritise their expulsion from Britain. We are continuing to remove one person every eight minutes, last year that included a record number of foreign prisoners."
Posted by Defender of Liberty at 08:36