Political Correctness and The Killer Society 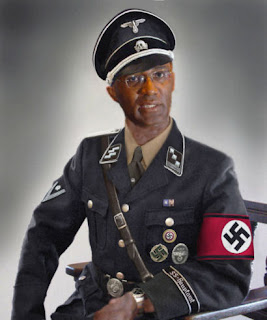 The slave begins by demanding justice and ends by wanting to wear a crown, he must dominate in his turn ".


Political Correctness has evolved from its Maoist origins into a genocidal cult more akin to Nazism. It regards the White European Race, and the ethnic sub-sets it contains, as the evil agent in the history of humanity.

It is taught in our schools and universities, its propaganda is broadcast into our homes by the media and the government and it dominates both the public and private spheres of British society. Along with its corporate paymaster, Consumerism whose taxes sustain its tyranny, it totally controls and dominates our entire culture and society.

Its hate is even taught to our children in their universities ;

Harvard educated Noel Ignatiev, an academic at Harvard’s W.E.B. DuBois Institute for African-American Research. Dr. Ignatiev is the founder of a journal, Race Traitor, which has as its motto, “treason to whiteness is loyalty to humanity.”

The journal’s purpose is “to abolish the white race.”

The Nation of Islam has its Death Angels to slaughter us - http://en.wikipedia.org/wiki/Zebra_murders

Step by step, stage by stage a society is prepared by propaganda and conditioning for the removal and extermination of a section of their own population.

Political Correctness is the latest manifestaion of this human process.

It has replaced history with propaganda and lies, and seeks to transform our society into a charnel house, a nightmare of perpeptual racial struggle by ever growing alien immigrant groups against our race, folk and kin.

The call below for an entire section of British society to be regarded as 'less than human' by the politician and public spkesman of the primary body responsible for protecting all our civil and human rights, is the most chilling call for mass murder and pogroms made by a British politician in the entire history of Britain.

It is in effect a 'green light' for genocide to go ahead, as if the head of the government and state body responsible for protecting minorities actively propagandises that a section of society are less than human, then this can be seen as tacit approval for the removal of that section of society.

The whole history of the 20th century has been out about Sociocide and Genocide.

The latter killed millions under Nazism, whilst the former killed over a hundred million under Communism.

As a Leninist, and avid fan of books about the Bolshevik Revolution and the Russian Civil War, Trevor Phillips knew precisely what he was trying to do when he used the lanaguage of the Communist Sociocide.

The process of transforming individuals and a societies into genocidal machines begins when one section of a society is designated as less than human by another more powerful section of society.

By classifying them as less than human, then they do not have human rights.

They are dehumanised and their humanity denied, their status lowered to that of animals.

Once they are regarded as animals, then like all other animals they may be slaughtered by human beings.

Once a section of society is regarded as little more than animals by a more powerful section of society and this belief is then legitimised and authorised by the State or employees of the State, then nothing exists to stop the 'humans' demanding the death of the animals amidst them.

All that is required in order to create the social situation where pogroms may erupt is for the 'animals' to be linked with incidents of criminality propagandised by the media.

Such an example of this type of propaganda would to label a section of society as less thn human and then state that this section of society is attacking 'innocent women and babies' and therefore the human beings must rise and dal with the animals in their midst who are threatening their wives and children.

This same process has been used in human societies in order to start and wage civil wars since the days of the Roman Empire.

This is the process of creating a 'Killer Society'.

The Killer Society is one where a political elite, at all stages of the social, political, economic, cultural, demographic, religious, environmental and national structures and processes have consciously set out to create a society where violence, murder, war and imperialism are accepted as part of the normal social processes.

Sociocide is the end result, and final stage of the Killer Society.

Political Correctness is merely an ideology of conditioning. It is designed to subvert the supremacy of free thought and replace it with slavery to propaganda.

The final stage of Politicial Correctness is Sociocide, for the process of political correctness is nothing more than a system of dehumanising societies in order to create the social conditions that lead to Sociocide.

The killer greatest asset is his ability to regard his fellow human beings as abstractions rather than a living, breathing, flesh and blood.

Only when our humanity has been stripped away from us can our lives be taken from us.

For the head of the state body to designate a section of society as less than human, is a crime against humanity.

I would ask people to make formal complaints to the police against Trevor Phillips for incitement to murder.

The comments are also examples of direct and public incitement to commit genocide and crimes against humanity.

Incitement to genocide is clearly an international crime (see Article 25 (3) (e) of the Rome Statute of the International Criminal Court).

The Genocide Act 1969 lays down that a person commits an offence of genocide if he commits any act falling within the definition of 'genocide' in Article II of the Genocide Convention as set out in the Schedule of the Act.

Article II states:- 'In the present Convention, genocide means any of the following acts with intent to destroy, in whole or in part, a national, ethnical, racial or religious group as such; (c) deliberately inflicting on the group conditions of life calculated to bring about its physical destruction in whole or part.'

Article IV of the Genocide Act states that "Persons committing genocide . . . shall be punished, whether they are constitutionally responsible rulers, public officials or private individuals."

By using the language of the Killer Society, then Phillips must now be regarded as an enemy of our national democracy and also of the indigenous British people.

He must be challenged in the courts and this language censured before Britain experiences its own pogroms, riots, civil insurrection and race wars directed against the indigenous White people of Britain who are expected to become a national minority group in about 50 years, and who are already minorities in many British cities.


To quote from the Herald:

“Scotland must guard against an increase in racism and attacks on asylum seekers, a leading equality watchdog has warned.

Trevor Phillips, chairman of the Commission of Equality and Human Rights, said there was a clear choice facing communities who are witnessing an influx of migrants.

Speaking at the STUC annual congress in Glasgow he said the choice was between welcoming people or fearing newcomers.

He urged people to turn their backs on racists in communities and at the ballot box and showed his contempt for the British National Party by saying they should be treated as “less than human”.

He said: “We will see communities standing up for asylum seekers who want to live as part of that community. We will see the Scottish government welcoming them as part of the fresh talent initiative.

“But we will also see the ugly face. We will see those who will assault a woman and baby simply because they are foreigners.

“We as a society have a choice. In England we have the BNP. The path is to keep them out We need to change in an inclusive way.”

Every revolutionary ends up either by becoming an oppressor or a heretic.
Posted by Defender of Liberty at 09:02