The Racism of the Rainbow Nation 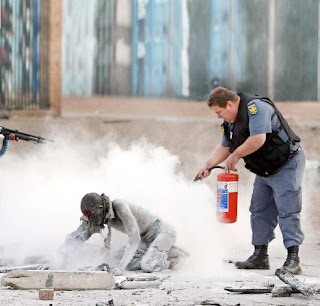 A tragedy of epic proportions is occuring in South Africa that the BBC has refused to publicise. During the apartheid era the BBC sought to depict all South African Whites as racists, except of course the ones who were members of the terrorist Communist group the ANC, and even though the townships of South Africa were based on ethnic and tribal lines and frequently slaughtered each other in inter-tribal conflicts, the inter ethnic racism of the black community was blamed on the Whites.

Now events in South Africa are revealing the true racism that afflicts the nation. Whilst White farmers are being murdered in a wave of racist pogroms across the country, a whole new form of racist violence has erupted in the black townships.

Refugees from Zimbabwe and other nations are being hunted down and slaughtered by blacks from other ethnic and tribal groups who believe the refugees are taking their jobs and lowering their wages. At least 23 people have been murdered by these racist mobs in the last few days, and the main way they have been killed is being hacked to death with machetes or having a petrol filled tyre placed around their necks and it being set on fire.

The ANC cannot evade responsibility for this crisis. They have been in power since the end of apartheid and they are the main sponsors of Robert Mugabe who has caused millions of Zimbabweans to flee their own country and come to South Africa.

The ANC government allowed the Zimbabwe refugees to enter South Africa as by doing so the very people who would have voted Mugabe out in elections, were no longer able to vote in those elections.

By allowing mass immigration of Zimbabweans into South Africa this allowed Mugabe to stay in power. Now these racial riots have erupted the ANC must bear full responsibility for this.

The process of asylum seeking is the tyrants best tool for keeping power as those in his country who oppose him are allowed to leave and live elesewhere thus destroying all opposition to them being in power.

The process of asylum seekers being allowed to settle in other nations then causes mass social anger in those recipient nations leading to events such as these in South Africa, and elsewhere across the world.

The whole process and logic of asylum seeking has to be stopped.

Note the colour and race of the police officer in the top image who is attempting to save the life of the man who has been set on fire by his fellow blacks.

Note also the race and colour of the man in the second image holding the shotgun and who is attempting to keep the crowd away from killing the man.

Once the BBC demonised the South African whites and police as racists and criminals, but now it appears that the only people preventing South Africa from falling into racial and ethnic civil war are the white and black police.

The tragedy of White South Africa was that the blacks it imported into the country to act as slave workers would one day have inevitably demanded their rights. Their demands for civil rights had to be met. At that point they voted the whites out of government.

In history all nations or empires that import in foreign workers to do their work for them, end up being the slaves of the slaves they imported in.

Just as we import in aliens to do our work, one day we will be the alienated ones working for them.

The lesson of history is that those who follow the demands of economics and growth end up as the slaves of the slaves they come to depend upon.

Best we stand alone and live by our own sweat and toil than depend on others who will one day replace us and enslave us.
Posted by Defender of Liberty at 08:36

I am enjoying every second of this and I make no apology for saying it.

The marxists are now reaping what they sowed and I have absolutely no sympathy at all. For years they have demonised and distorted everything about the whites and especially the British empire.

Look at the degeneration, the filth, the squalor, the violence, the depravation, the waste as what were once jewels are transformed into dumps.

No one had any sympathy for the whites who were and are being persecuted over there. No one cared about how future generations would be affected by the demonisation and dismantling of white rule, a rule that was far more benficial to blacks than black rule is to blacks.

And we have the same problems over here in our black communities and so does the United States.

My friend is South African. I will share with you what he said to me just one week ago:

"The marxists helped the blacks destroy Rhodesia and South Africa and now the blacks will help the marxists destroy Europe. What happened to us will happen to you."

There are evil people amongst us with blood on their hands. I only hope the marxist traitors who have created this mess are made to pay in the heaviest way possible for their disgraceful crimes against humanity.

The BBC would make an excellent start.

Wrap up your drivel in any nice words and you are still a racist cunt.

Oh good what a fucking brilliant insight into the mind of a retard.

redandblack - YOU ARE THE RACIST CUNT. You and YOUR ILK have caused more harm to be done to black people than ANYONE. Your hatred, your bitterness, your myopic self centred vain white-hating, empire hating, misguided RAINBOW fantasies have caused immense suffering to the black peoples.

YOU ARE RESPONSIBLE. YOU ARE GUILTY. YOU ARE RACIST FASCIST SCUM.

The number is up you fucking cretin. We're onto you and your fellow dispicable, vile, nauseating, racist fucking marxist fascist scum who are destroying civilisation.

God help you when we catch up with you because by God almighty you and your vile, red marxist scum will answer in the strongest possible way for your evil crimes.

YOU FUCKING BASTARDS. YOU UTTER FUCKING FILTH, SHAME ON THE DIRTY SICKENING LOT OF YOU FOR WHAT YOU HAVE DONE TO INNOCENT HUMAN BEINGS.

Sorry Lee for the intensity but vile racist marxist scum such as redandblack deserve it. No they deserve much more for what they have inflicted on innocent human beings. What vile reptiles they are.

Well that was an interesting response "Chris", what a hate filled person you are. I love all people regardless of colour, faith and creed. I see only bthe individual person. You see a "white" man, a "black" woman. What kind of society is it that you want that divides mankind into compartments "black", "white", "gay" , Straight", Muslim", "Jew". Is it you who decides where everyone fits? If not you then who does? You cant make those decisions as its not yours to make and what defines "white", "Black", "Asian"? You view of society is warped and the hatred you have for other fellow human beings is clear for all to see in your rant. Does you hatred for others derive from your own sense of inadequacy, some memory of something that happened to you from childhood maybe. Were you beaten up by a black person and couldnt make the distinction between the attacker as an individual thug and all black people? I have seen many cases of this in my life. The most hardened homophobe is often the one struggling with his own homosexual tendencies. The most ardent anti-Semite is the one who has some Jewish ancestry and is strangely ashamed of that. Perhaps you have been hard done by by a black person but get over it. Its the same with the widespread Islamophobia. Just because the London Tube bombers were deranged fanatics claiming to be Muslim it doesnt mean all Muslims are wicked people intent on blowing themselves and their fellow Londonders up.

Here are a couple of sites that reveal the mounting savagery of African blacks.

I have to warn that some of the images are harrowing.

Murder of Missionaries in Rhodesia

The latter victims, who include a three-week-old white baby bayoneted to death, were from groups who had dedicated themselves to helping the native population.

That shows the level of black 'gratitude.' Much the same is true in the UK and the US, where a reliably estimated 4 out of 5 blacks are rightly described as 'savages.' (They are just as vicious against the remaining 20% as they are against 'Whitey,' it should be noted, if not and probably more so.)

The perpetra(i)tors of these atrocities are, of course, rab's crowd - along with most of the old gang politicians, including Thatcher, who betrayed Rhodesia at the Lancaster House summit.

They are worse than the likes of rab, insofar as they are clearly much more intelligent and could legitimately be held accountable for their actions.

In rab's case, and that of similar 5th column clones, St Paul's admonition to the Thessalonican Church, 1 Thessalonians 5:14, might just apply:

It is not men that divides Humanity it is nature itself. You seem to have a problem with that. I'm afraid that is where your kind (Anarchist Utopian eejits) have got it all wrong.

It is not man tha tcreated 'White man' or 'Black woman' it is nature. For you to unlearn the ability to see the difference in simple life forms is a fundamental and freakish case of self delusion. Alas mass delusion is a sad aspect of the radical left. (I used to be of the leftist/anarchist persuasion myself. Thank God I copped on.)

What is wonderful about Humanity and indeed all life forms, is it's diversity. DIFFERENCE.

Real diversity is daily being eroded by the massive multicultural experiment of mass immigration. It is one of the greatest Ironies of our era, that the left promotes 'diversity' at all costs over the indigenous, resulting in the replacing of the indigenous with the other and destroying REAL DIVERSITY.

Funnily enough, at the same time as massive human migrations are happening, massive plant and animal migrations are also taking place. In my native Ireland apparently up to 10% of our indigenous flora and fauna has given way to new varieties that have arrived in the last ten years. (whilst 13% of our prisons contain non-nationals!)

Chris isn't warped, he is angry. Angry that he feels his people are being replaced, slowly but surely, and that for him to say it somehow means he is a bad, evil, warped person.

Of course, there are those who stray into real racism ( that much maligned word). This is usually based on fear and ignorance. But the authorities never really seem to care about placating fear.

To call someone a cunt in the first place is to be expectant of some abuse in return.

Without the white man to keep them civilised the negro in southern africa has reverted to type.

They kill, burn, rape and loot, just as they now do in South East London, because the NewLab filth have allowed them free reign.

Analyse all the stab and gun related deaths over the last 10 years in London - its Black people doing it - No lefty bull shit can mask this true fact,

And now it has spilled onto the middle class streets of Sidcup we may finally get this publicised.