Colin Auty - The Last of the Shadow Puppets 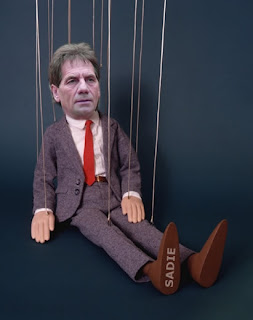 Lets take a look at Colins 'leadership team' shall we ;

This is the team that are supposedly running a leadership election for the benefit of the party, when in fact they are all the same whining plonkers that spat their dummies out when Steve Blake, Sadie Graham, Kenny Smith and Matt Single were discovered to be liars, thieves, spies, traitors and back stabbers.

The really sad thing though is that NOT ONE of the so called 'supporters' of these pack of morons is anything other than the usual suspects who were whining and sulking when the plotters were discovered at Christmas.

2) The propaganda on it is written by Matt Single


This is the last throw of the dice for this cabal of losers and malcontents.

The truly sinister thing about this pathetic 'challenge' is that they all know that they are not going to win this challenge.

This challenge is simply about trying to cause more disruption in the party and to try and damage the parties growth over the next year in the lead up to the European Elections.

This is precisely what Searchlight wants. Searchlight knows that the BNP cannot be destroyed by external pressures and therefore only by causing internal problems can the progress pf the party be slowed and damaged.

The Inner Enemy is the true enemy we are facing.

The plotters [revious plan was to launch their pathetic rebellion just before the London Elections and thereby cause as much damage as possible to the chances of the BNP in the recent elections, but luckily they got caught out and we prevented the plot from destroying the London GLA campaign.

So instead of just going away in shame and disgrace this pack of losers then told all the BNP idiots that supported them NOT TO CAMPAIGN AND HELP the BNP candidates in the recent GLA and local elections.

Some of their supporters did this and as a result some areas of the country were lacking activist teams to go out and help our candidates, and this damaged our vote in some areas.

This was also what Searchlight wanted.

At every moment the script the plotters have been following could have been written by Gerry Gable himself - and as the first rule of nationalism states ' Those that assist the enemy ARE THE ENEMY'.

The idea that this collection of traitors and thieves can now try and pretend to be 'trying to save the party' when they told their supporters to not stand in the recent elections or help out the BNP candidates in the elections, and even worse some of their supporters stood as independents against the BNP, shows that these traitors are untrustworthy snakes who no-one can trust.

Colin Auty may be a 'good bloke' according to some people who know him, but he is also a willing puppet of these idiots and therefore demonstrates that he is a fool.

He chose to be a puppet, he chose to allow the plotters to pull his strings and he is now working for them and not the party.

That is simply treason.

I did not intend to interfere in this debacle of a leadership election as I at first thought this was a legitimate leadership challenge.

It was not until Auty allowed a post on his blog to attack me directly that I became involved.

That was a very stupid mistake Auty, as by doing so you revealed to me the depth of your treason and corruption at the hands of the plotters.

The logic of the plotters was simply 'lets attack Barnes and make Barnes a target as Barnes was a person who attacked us when we were discovered at Christmas trying to destroy the party'.

This was a really stupid thing to do, as by attacking me it revealed to me who was really behind this challenge.

I have never had a problem with Colin Auty, I have met him once and he shook my hand and was as nice as pie to my face. Therefore for him to attack me for no reason meant that someone else was pulling the strings.

Once he attacked me then I began to look at his 'challenge' and the pictures all began to fit nicely together.

If Auty had not attacked me then I would have not investigated his challenge, as to be frank I have more important things to get on with such as helping Richard Barnbrook in the GLA (such as drafting up the legal letters to stop discrimination against him as placed on the website yesterday) and also doing research and reports to assist in the plans for the European Elections.

It was only once Auty attackd me that it became obvious who was really pulling the string on this challenge.

Auty and the plotters are traitors.

Auty himself is the Last of the Shadow Puppets, and this is the last throw of the dice before the plotters either vanish or set up their own joke party.

Before they can set up their own joke party though, they must first try and destabilise the BNP and take as many saps and suckers with them.

This leadership challenge will fail.

When it does the plotters and their supporters will realise they cannot destroy the BNP from within and they will leave the BNP and set up their own party.

Lets hope that the puppets and the plotters vanish as swiftly as possible, and that the last sign of them ever being present is the fading stench of corruption and lies that will vanish just as swiftly as they leave the room and finally shut the door and go.

Colin Auty may not be a traitor himself, but he knows what he is doing and he has chosen to be an accomplice to those who have been proven to be traitors.

Colin Auty is guilty of aiding the traitors, and that is enough to condemn him as an accomplice to treason.

Those that aid traitors are themselves traitors.


GO NOW TRAITORS - GO NOW AND TO HELL WITH YOU ALL !
Posted by Defender of Liberty at 11:26

As sad as I am to say it, I have to aggree with Lee yet again.

Unfortunately being a 'good bloke' doesn't necessarily mean that person can't be duped.

I've met a few people who turned to the dark side, and face-to-face have got on with them all. As I do with many people.

But Strider can't forgive those who seek to disrupt the focus of his people.

Nationalism is to reach up and achieve - those who hold back achievement are Communists, by any other name.

What's Roger (Im happy to let ethnics into the BNP) Robertson doing with a gang of neo-nazi extremists like Kenny (Swastika tattoo) Smith, Saddy (Blodd and Honour) Graham, unreconstructed racist thug Blake and gun- (er, do I mean gun or gung) ho over the top with a semi-automatic Madd Single.

I wonder how much they paid the singing Dhimmi?
Just get rid of the warbling, backstabbing wanker. I'm sick of these limp-wristed pinkos in the party anyway.

I can vouch for that, they are trying to recruit me!

Fact is, they can't afford me as my loyalty is not for sale.

Neither is my country, my ideals or my children's future!