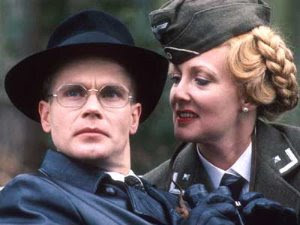 Image - I have been contacted and informed by Denise Garfields psychiatrist in confidence that when Garfield looks at a photographic image or picture of me placed before her on a table in clinical trials, then due to a problem with the wiring and circuitry in her brain ( the professional psychiatric term for the medical condition is ' SHE IS A CRAZY BITCH !!! ' ) she actually sees a picture in her distorted brain of Herr Flick from the BBC comedy show Allo Allo. This explains her infantile obsession with using the word 'nazi' every three words on her blog. Nazi Delusional Syndrome is now a recognised psychiatric term with a new sub-set of the condition called 'Herr Flick-itis'.

Oh well I guess the ejiots Garfield and Ebanks are busy doing what they usuy do when they arent e mailing each other and making their plans for secret e mail attacks which is probably torturing cats and indulging in self flaggelation ( Is Ebanks now a carpet muncher we wonder, though of course the image of Ebanks and Garfield munching on each others carpets is something that could strip enamel paint from a bath).

The good news is that one my fans on Lancaster Unity has set up a new blog about me.

Thats right, not content with Lancaster Unity having a 'Barnes Fixation' it now appears that the lancaster unity 'special people' are now even going to set up a blog to honour/hate me.

Jesus, these people need to get laid.

I am working on a new theory of ' The Left, Sexual Dysfunction and Projection '.

It is my theory that the reason why the Lefties are so obssessed with me is because ;

1) They are so ugly that they cannot have sex with living human beings even if they pay them (or even import them from the Far East is what most ugly blokes do these days) - take a look at Ketlan. That guy couldnt get laid in a morgue. He looks like Keith Flint from the Prodigy after he fell all the way down from the top of the ugly tree and hit every branch on the way down, got hit by lightning at the bottom and then rabid rats gnawed at his face whilst he was unconscious.

Fuck me theres, ugly and then theres taking the fucking piss.

Ketlan, you are abusing the right to be called ugly.

Just a quick question Ketlan - is that really your face or are you the worlds first 'Arse and Head Swop' transplant recipient ?

If they ever set up an 'Ugly Olympics' you could ugy for England - and win gold you ugly twat !


3) Both the lesbian left, the hetero'cant get laid left' and the cock jockeys all see me as some archetypal figure. The lesbian left are in fear of their own repressed sexual feelings for my rampant virility, the hetero lefties fear for their women as they know that the moment their women met me they would regard their lefty boyfriends with contempt and amdire my rampant bull like male sexuality whilst the cock jockeys all suffer from 'I hate Nazis / but dont they look just soooo sexy in those tight lederhosen in the old pre-WW2 Nazi propaganda films Complex' and therefore they project their repressed sexual deviancy and desires for ze nazis ( to be dominated and 'invaded') onto me.

I shudder to think of the thoughts in the septic tank like minds of these sick, sick people.

Anyway heres the details of the new blog about me ;

You can post your favourite Lee Barnes moment, quote or faux pas.

This explain's the blog's purpose:

So, come share we us your favourite Lee Barnes (LLB Hons) moment at:

You know you wanna (especially you IrishTony).

The day that these idiots get jobs or girlfriends / boyfriends or proffesional psychiatric help is the day my life will be a lot less fun.

They once said that 'Immitation was the most sincere form of flattery'.

In the era of the Internet you are nobody until somebody sets up a hate site to attack you.

Only once you have your own hate site can you be called a celebrity.

In the 80's it was having a stalker that made you a celebrity, but thats just sooooo passe now. I had my own stalker in the 80's (an ex-girlfriend) and though it was fun whilst it lasted in the end it just gets tedious having them sitting on the wall outside your house and staring through the front room window whilst you are watching The Proffesionals.

A cyber hate site though, thats something new and exciting.

Unfortunately I will not be posting on the site unlike the people that will be posting on it I have both a life and a sex life.
Posted by Defender of Liberty at 00:11

I honestly thought Ketlan was female!

You must be on the right track Lee. I hope one day I annoy those sad people so much that they start a blog about me. In fact, it would be great to annoy them so much that their heads start swinging around in circles non stop until they explode.

Talking of cock-jockeys why dont you have a word with Deesides batty boy, Herr Camp, no I mean Herr Kamp, oh blast I mean Hair Kemp....ouch you are a naughty boy....

You'll never dare publish this, might kind of give the gays away, I mean game away........

This is immature and reflects upon the BNP similarly. Cut this internet drama rubbish out.

I wonder if you would add our ‘Books For Patriots’ blog (http://booksforpatriots.blogspot.com) to your links section?
BFP fills an important gap for patriots on the internet. Our hope is to help patriots gain knowledge and strength as we continue to push forward for success in our homelands around the world.
Our policy is to link to any Patriotic blog spot or website that links to us, provided the blog or site does not promote violence or hatred.
We are non-partisan and will not engage in debate about political affiliation, and we ask, that comments on this blog are kept for discussion on the books and the issues they raise.
Our blog exists to assist Patriots regardless of political or organisational affiliation and we hope it will benefit Patriots across the spectrum to expand and develop their skills and knowledge.
If you do provide a link to ‘Books for Patriots’ please let us know via the thread link, which can be found below the list of linked sites, so we can return the favour.
Best wishes, Kip

The annoying thing for me is not that reds are attacking one of our own, we expect that, but supposed fellow Nationalists giving them the ammunition, that is unforgivable.
So hopefully the childish insults continue to sprout up attacking Lee Barnes, this gives us proof that the retards on the left are still alive and stealing our air.
Call Barnes what you like, at least he has the balls to stand by what he types.