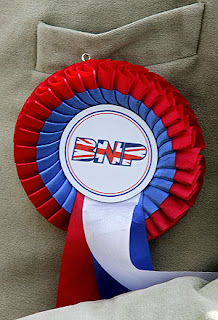 Well done Richard Barnbrook - the FIRST of many to come, BNP GLA MEMBERS.

We all know that we actually got about three elected and that postal ballot fraud, tampering with the boxes, stealing votes, fake voters and an unprecedented influx of aliens all allowed to vote in the GLA were all used to deny us the true numbers of elected representatives - BUT WE DID IT !

The rise in the number of people voting were not indigenous Londoners, they were all immigrants and aliens - and yet we still managd to win a seat in spite of the vast new numbers of hostile to the BNP aliens gven a vote by Red Ken and his cabal of gangsters and crooks.

No UKIP on the assembly

No Respect on the assembly

Here is my special message for the UAF, Lancaster Unity and the Neo-Nazi Stormfront Losers who all wanted and campaigned together to ensure the BNP did not get voted into power ;

Denise Garside I hope you wake up this morning and realise that a New London has been born, one where WE are the voice of the indigenous British people.

I am looking forward to visiting Richard in his new office IN THE GLA BUILDING and assisting Richard for the benefit of the indigenous Londoners who have risen up against their oppressors and the bullshit media lie machines and claimed their capital back for themselves today.

Now the indigenous Londoners finally have a voice that represents their interests, and not just a mayor and a GLA that arse kisses ethnic, aliens and immigrants.

The Red Citadel has fallen - the BNP are now inside the fortress of the criminals, crooks and perverts that once misruled London.

This is just the first step - next step is the Euro Elections.

A New Dawn has risen in London, a New Dawn rises for the British people.

The British National Revolution has begun !

The sacred spring of Liberty has once returned once more to our blessed Isle !
Posted by Defender of Liberty at 23:40

My favorite post is by Rah on the Lancaster unity site at 1.41 am - I kid you not this is ;

I LAUGHED SO HARD I SPAT ME CORNFLAKES OUT !

RAH, YOU ARE THE WORLDS GREATEST PLONKER - EVER !

DENISE YOU AND YOUR COLLECTION OF SAD SIMPERING FUCKWITS ARE HILARIOUS !

Here is my favourite searchlight quote from pete b on the lancster unity blog ;

our finest hour came with U-day two days before the election, when 700 volunteers braved inclement weather to deliver 200,000 campaign leaflets at 200 tube and railway stations in the London area "

Never have so many morons wasted so much time, money and effort in achieving so little.

Nick Lowles wrote back in February:

"Our objectives are simple. We need to prevent the BNP from gaining the 5% in the London list vote that would give it one seat...

Searchlight cannot stress the importance of the London elections enough. A significant BNP break-through here will give the party a major platform for the European elections."

Ha ha ha ha! Straight from the red scum themselves. Looks like their silly bus gave Barnbrook a free ride straight into the GLA :-)

I think cold reality will be hitting the UAF today, many will now quit the UAF as they know that nothing they do makes the slightest difference.

The more they call us the bogey monster, the more coverage we get.

Many in the BNP will be keen to help Richard at the GLA in any way possible, he certainly won't be alone. No doubt Ken and Jasper will have been busy with the shredder but we will find out just what they have been up to and tear down what is left of their racist cabal.

I have been banned many times for posting pro BNP comments on forums owned and operated by regional newspapers, harassed and cyber stalked. Some of this has been caused in part by the likes of the associates of Garside and her pond life poodles.

My message to them is this:

If you really believe that the BNP's recent achievements are not a success, then quite clearly your efforts in comparison have been an unmitigated fucking disaster.

Despite having access to taxpayers money, access to powerful unions, untold NGOs and people in positions of power and authority you still failed in your primary objective.

Kevin Lardside, his gimp, Tosseroffski and all the other uaf work-shy losers, are in a state of total denial today, after we spanked then resoundingly in the local polls. Together they have spent £100,000s and a lot of effort to ensure our ongoing success. We have new councillors; sitting councillors re-elected; and - the REAL icing on the cake - Richard esconced in City Hall! F***ing fantastic! But more importantly, in many respects, we have gained a massive surge in membership, promises from even more people to stand in the future, increased numbers of activists, and that's even before we have started to follow-up on all the new enquiries that have been pouring in during the election campaign. The growth of the BNP is going to be exponential over the next 12 months and the amoebic pond-life that make up the uaf have contributed (in their own small way) to our advance - well done scum!

Keep saying it as it is Lee. Good on you Richard, your win is one for the British people, absolutely fantastic mate.

"going to be exponential over the next 12 months"

Indeed as I was reading through some of the comments left on LUF regarding BNP's increase in influence and how long it would take two thoughts came to me.

1. Have the so-called "Mathematitions/Statisticians" on there ever heard of exponential curves or did they stop at the straight line lesson finding anything other than linear thinking to hard to comprehend.


2. At least some of them realise the BNP is growing, not shrinking and despite their best efforts there's not a lot they can do about it.