The Truth About the Left 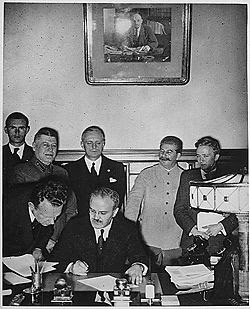 Molotov signs the German-Soviet non-aggression pact. Behind him are Ribbentrop and Stalin.

For the truth on the Left visit this site here ;

Watch them and weep for the fallen nationalist heroes.


The Molotov-Ribbentrop Pact, colloquially named after Soviet foreign minister Vyacheslav Molotov and German foreign minister Joachim von Ribbentrop, was an agreement officially entitled the Treaty of Non-aggression between Germany and the Union of Soviet Socialist Republics, signed in Moscow in the early hours of August 24, 1939, dated August 23, that renounced warfare between the two countries and pledged neutrality by either party if the other were attacked by a third party. Each signatory promised not to join any grouping of powers that was “directly or indirectly aimed at the other party”. The pact also contained secret protocols which divided eastern Europe into German and Soviet spheres of influence. The Pact is known by a number of different titles. These include the Nazi-Soviet Pact, Hitler-Stalin Pact, German-Soviet Non-aggression Pact and sometimes as the Nazi-Soviet Alliance[1]. It remained in effect until Nazi Germany invaded the Soviet Union on June 22, 1941 in Operation Barbarossa.

In addition to stipulations of non-aggression, the treaty included a secret protocol dividing the independent countries of Finland, Estonia, Latvia, Lithuania, Poland, and Romania into Nazi and Soviet spheres of influence, anticipating "territorial and political rearrangements" of these countries' territories. All were subsequently invaded, occupied, or forced to cede territory by Nazi Germany, the Soviet Union, or both.

The Communist scum of the Lancaster Unity, UAF and the Respect Party are the apologists for these animals, and these are the people that one day will be swinging from the gibbets of our nation for their crimes against our people and deomcracy.
Posted by Defender of Liberty at 07:36