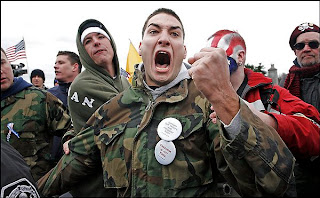 Inspired by the film Haditha.

A dark wind blew down the street and into our home,
It came without warning all the way from America,
Breaking down doors with bullets and kicks,
Once we lived here, now we die.


Until that that hour in Haditha came around,
And the inevitable in its final fatal guise,
brought forth a war reflex from an I.E.D snarl,
Then perpetual motion, kill and be killed.


Empty shells where once men had been,
Lay scattered in the streets,
Their torn and ragged limbs, still weeping
Guns and arms gathered in the gutters.


Then obscene as if in a dream, moving from room to room,
One by one, systematic exterminations,
Their perfect white teeth, shining in the sun,
Smiling whilst killing children.


Now soldiers grind their rifle butts on broken bones,
In the prison cells and screaming rooms of liberty,
Undertakers work in the delivery wards of democracy,
As storm clouds gather like ravens above our corpses.


Freedom is submission, obedience to the book,
Say the masked men of the lion on the city streets,
The pen of their prophet was dipped in blood,
And only wrote words of death and war.


There is no room for God within us the devils say,
The holy spirit is the enemy of the book,
All heads and backs must bow before its bloody pages,
Whilst God resides between the lines.


They teach to the lost that God gives life,
So that only they may steal it away,
Their lessons are the lies of Satan etched,
With knife marks upon the body of a headless teacher.


The broken war machines, our brothers and sisters,
Pawns of the generals and politicians,
Slaves to Imams, preists and puppets,
Ordered to defend God, oil and the dollar.


Bring them home, bodies, bones, soul and all,
before you too lose your very selves,
lower your flags on this failure and flee
heal the gushing wound in our side.


America, this is the shame you shall forever bear
The burden that can never be lifted,
You sent your children to die in unjust wars,
and surrendered your reason to treason.


Osama Bin Laden and Bush, The Carlyle Group and 911
Is the dark heart of their Conspiracy,
Those who knew and those who profited,
From the Oil Wars of the Corporatocracy.


Smash the engines of avarice ever devouring,
Set free both the hunter and the hunted,
No longer living our lives in their rifle scopes,
On radar screens, one button from oblivion.
Posted by Defender of Liberty at 08:12