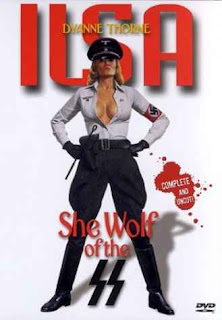 Hazel Blears - She Wolf of the New Labour SS State

This plan below is nothing more than fascism, it represents an extension of the power of the British state to intrude in the private lives of British citizens that did not exist even during World War Two.

These plans are not the plans of responsible politicians in a democracy, they are a complete admisson of failure by decades of failed politicians forcing failed ideas upon an unwilling population - Multi-Culturalism and Mass Immigration prime amongst them.

The definition of political troublemakers wil apply to everyone who the government regards as against them - from socialists, trade unionists to nationalists and religious leaders.

This is the creation of a fascist state before our very eyes.

Not only that, once these powers are in place the Tories will be in power - nd they will use these Labour powers to assisst them when they are in power.

What next - internment camps for those that puts plastic bottles in the glass recyling bins or concentration camps for political dissidents.

Successive governments have created the present volatilte social siuation by allowing millions of unwanted immigrants to enter and colonise our country, and now they have decided to subvert our democracy, rights and privacy to ensure their PC Police Gestapo can keep us all under surveillance and tyranny.

This is a scandal of epic proportions.

Put your bins out late you will not only be find you will go on a government data base as a terrorist and criminal.

Dont like your neighbour - then ring the community monitoring nazis up and report them.

Dont use your real name, just use your other neighbours name and report the neighbour you dont like.

Dont like your Christian neighbour, then report them as a racist and get the council to spy on them.

Dont like the black guy next door, then report them for racism.

The possible permutations for abuse are vast.

This is an insane idea, one of the most draconian and authoritarian state policies since the Nazis and the Communists.

Hazel Blears is a demented nazi bitch, a crypto-fascist quizling of the corupt police state and the government nazis.


This is also against the DPA 1998 as the plan states they will collect details on individuals political beliefs, race and opinions - all of which are defined as sensitive data under the DPA and can only be collected with EXPRESS permission of the person whose details are being collectd.

Not only that, this potential plan is also illegal under international conventions and the EU treaties.

The fact the idiot Blears has stated she has even thought about this plan will destroy the Labour Party at the next election - as the Brtish people, as Orwell knew, despise Big Brother and they will despise Blears Little Sister as well.


More than 10 million people are to have their everyday disputes, their
politics and their business lives checked by new "tension monitoring"
committees.

The committees are to be set up to try to cut the risk of
riots or disturbances in the aftermath of terrorist outrages or
outbreaks of local racial trouble. They will ask for and file reports on
named troublemakers whose political activities are considered to be
raising community tensions.

Reports on the behaviour and attitudes of
local residents will be collected by community workers, neighbourhood
wardens, local councillors and provided by voluntary organisations,
according to a paper published by Communities Secretary Hazel Blears
today. It will then be considered by the monitoring committees run by
town halls. A sample "tension monitoring form" for use in checking on
the likelihood of local racial or religious trouble asks for details of
individuals considered to be making political trouble. The monitoring
committees will ask for information on those identified as troublemakers
with includes "age, gender, ethnicity and faith" of those being reported
on. The call for monitoring of everyday life in the cause of "community
cohesion contingency planning" was made by Mrs Blears in a paper aiming
to help identify "tension hotspots" and improve cohesion - the
Government's buzzword for reducing racial and religious strife.

The word was adopted in 2006 after the once-dominating left-wing doctrine of
multiculturalism was dropped by Labour because it made tensions worse
rather than better. But the establishment of monitoring committees in
town halls is likely to generate new concerns about spying and
surveillance by local councils.

Concerns have deepened in recent weeks after the Daily Mail revealed that Poole council in Dorset had spied on a family's life for three weeks because it wrongly suspected the parents of abusing rules on school catchment areas. There are also worries over the spread of new council quasi-police forces, like the bin police that
recently gave a criminal record to a bus driver in Cumbria who left the
lid of his family wheelie bin open by four inches.

Mrs Blears' paper said that a recent survey by her department found that 81 per cent of the population feel that people from different backgrounds get on well
in her area. However, that means that nearly one in five people - more
than 11 million - live in areas where the new tension monitoring
committees will operate.

The Communities Secretary said: "The overwhelming majority of people in this country live successfully side by side but we cannot take this for granted. "Challenges to cohesion do exist - this might be between different ethnic or faith groups or new
migrants and longer-term residents - but things can be done to address
problems at the earliest opportunity and stop things escalating." She
said town halls would get an extra Â£50 million to help them set up and
run the new tension monitoring committees, each of which will be run by
a senior local authority official.


The committees will include representatives from housing authorities, schools, the NHS, the fire brigade, community workers and neighbourhood wardens in area which have
them. Voluntary, community and faith groups will also be asked to
provide information.

They will record "qualitative community intelligence" alongside reports of race incidents, gang and turf conflicts, disputes between neighbours, complaints about noise, and examples of low local trust, including low trust in politicians.

Economic activity, including business investment, and housing demand
will also be monitored. So will political extremism. The "sample tension
monitoring form" provided by civil servants as a model for councils to
follow in recording information calls for the name of the monitor and
his or her organisation to be filed. It asks for an assessment of
whether levels of community tension are high, medium or low. Under the
heading "political" monitors are asked to provide "details of
situation/incident (ie where, when, who (age, gender, ethnicity, faith),
and what (useful to specify whether 'experienced, evidence, or
potential)."


Councils are told that under data protection law they are
allowed to record details of individuals as long as the material is
"fairly" gathered and stored.
Posted by Defender of Liberty at 01:50

Straight from the Common Purpose handbook. Create a problem then have the solution which includes more eradication of freedom and more control of the populace.

The Stasi, the KGB, the Gestapo - well Britain, we now have our own versions of these monsters and YOU VOTED FOR THEM.

Frightening, truly frightening and just like Turkeys voting for Christmas, the British sheeple will continue to vote for their own destruction.