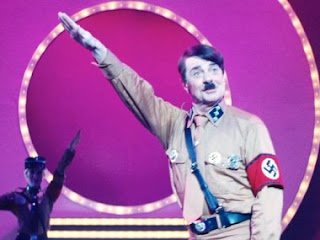 Yes, its Jack Black back on stage, the HollyWood Nazi Hero. 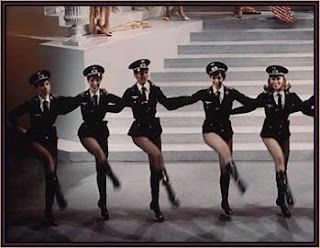 Doriot, Raffles and Sea Vixen glam it up for Jack Ze Boss and do the Nazi hot Shuffle at the Stormfront Christmas Party


Yes it that time again when the Stormfront Losers, Voice of Change creeps and the various saddos that like big boots and lederhosen weep and wail that as usual the BNP did not fail in an election.

Led by the deranged homosexual Sea Vixen ( a man with a big mouth but no balls - hey big man give us your real name instead of hiding like a little girlie behind a fake name on Stormfront and giving it large you gutless little slime bag - you can leave it on this blog and I wont put it up ) and his civil partnerships chums Raffles and Doriot ( the two biggest non-entities in nationalism since Peter Baker and Peter Rushton), they are once again weeping at the failure of the BNP to collapse.

These people are one of the gang of ten morons that represent the evolutionary dead end of nationalism as it infects sites like stormfront.

Whilst these morons and their tiny clique of supporters have spent the last six months working with the Voice of Change idiots to undermine the BNP (INSTEAD OF WORKING TO GET BNP MEMBERS ELECTED) they have merely been doing the enemies work for them.

I suspect that Sea Vixen, Doriot and Raffles and led by their demented Fuhrer Jack Black ( a man who could discover a jewish conspiracy in the sugar content of the syrup in a tin of peaches ) that they are in reality nothing but reds themselves.

Why else would they be so dumb ?

What with their close friendships to known reds, their endless attacks on real nationalists, their friendship with Denise Garside of Lancaster Unity and their support for any extremist that wears a swastika thong, they are the weasels of nationalism.

Like all little men with big mouths they hide behind silly names on stormfront whilst doing nothing in the real world, and they are in fact nothing but the nobodies of nationalism.

Today I have attacked on this blog Lancaster Unity, Boris the Clown, Red Ken, UKIP, the Greens and Respect, so therefore it is only right I have a pop at the saddest little cliqque of sexual inadequates on the planet, the Hamster Men of Stormfront, Raffles, Sea Vixen and Doriot and their Fuhrer - Jack Black, the man who could discover a Jewish conspiracy even in his sleep.

Note this classic from Jack here ;

" As I approached the entrance to the polling station (7.30) I was greeted by a bald German (Jewish/part-Jewish?) chap in a trenchcoat who wanted to know my number.

I gave it to him and went in.

The three officials sitting at the desk were:

i) a white Thalidomide woman

There was also a white higher-up chap hovering about and, outside with the bald German, there was another white woman.

Better than last time when there was a black woman, an Asian woman, a Jewish bloke and a white Englishwoman. "

No Jack - There are no 'bald German Jewish ' people in raincoats hanging around suspiciously waiting for you at the polling station. You are a nutter thats all.

In fact you are as just as demented as Denis Garside of Lancaster Unity, its just that where she sees ZE NAZIS everywhere , you see ZE JEWS everywhere.

Raffles, Doriot and Sea Vixen are just the rest of the Marx Brothers in your delusional comedy.
Posted by Defender of Liberty at 08:23

You are a dirty scumbag barnes. BNP elction? Wow! 16 extra seats out of the thousands up for grabs? Call that a major win; what a joke! You live on Mars you piece of shit. I hope you die you slime. I fucking dare you to post the address of your dirty bedsit slum; come on big man lets see what you've got.

You sad little transexual freak boy - how about leaving your address here and your real name.

You are nothing but dog vomit that hides behind a fake name like some sad little degenerate pervert.

You make me sick you vile scum.

Come on idiot whats your real name - and dont hide behind a fake address and name you loser.

It appears that the left scum think that setting up a fake e mail address is enough to ensure they are not bubbled as idiot left wing scum bags.

You must think we are mugs.

Come on you sad little left wing loser whats your real name and e mail address - and dont hide behind the fake e mail you set up to post in this site you mug.

you forgot the fairy godmother of the hamster boys of stormfront - Number5. i bet they like to be taken in to his office and having their bottoms paddled.
the little pervs

Go and fuck your mum, cancer boy. Hurry up an fucing die you dirty cock-sucker!!!

Don't forget Always Shite, with his totally moronic 'Richard barnbrook,s speach' thread, in which he has the cheek to attack Richard Barnbrook.

This neo-Nazi moron is typical of the anti-Griffin vermin who infest Stormfront Britain.

He wouldn't win a seat on a bus.

If he sat next to me with his two litre bottle of cider I'd soon kick him off, that's for sure.

This is getting silly

Always white is a loser.

I've been having a PM exchange with Sea Vixen on Stormfront and he now admits he's gay.

Anyone who supports Tory or Labour is a racist piece of scum - you cannot support them without being racist. The BNP on the other hand openly admits that they want what's best for the country, so sad pathetic brainwashed little shits like the majority of posters, who all commit criminal acts (asking for adresses so they can lynch law abiding citizens whilst preaching the moral high ground!) listen to their Asian friends (who have done nothing but overcharge for everything. Try getting a 39p stamp for 39p in an Asian shop if you don't believe me!) and agree with everything their Asian pals say!