The Amero Is Here 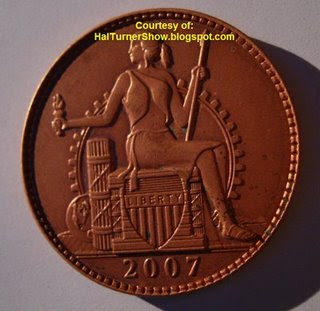 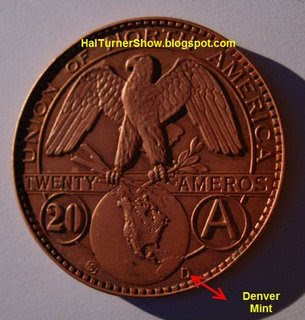 On the 25th September 2008 wrote an article stating that the credit crunch was a manufactured event with the intention of forming the North American Union, scrapping the dollar and imposing the Amero.


The proof of this is in the images above.


Earlier in the week, I reported via this blog, the shipment of 800 Billion AMEROS from the USA to China. Many of you called "bullshit" on the posting, claiming it was a hoax. I now offer irrefutable proof.

Below is a video of me holding one of the actual 20 AMERO coins sent to China. Additional coins with face values of 50 and 100 AMEROS were also sent from the U.S. in addition to paper currency shipped BY the U.S. from the currency printing firm in Europe!

Since the Chinese presently hold about $2.3 TRILLION U.S. Dollars in cash from our trade imbalance, the Chinese demanded and got billions of the new AMERO currency in advance of everyone else.

China made this demand to ease its exposure to the financial disaster that is going to take place when the U.S. Dollar is de-monetized; declared to be "not money" by the U.S. Treasury.

The 20 AMERO coin shown in the video below was minted at the Denver Mint, evidenced by the "D" stamped onto the obverse of the coin. The coin bears the year 2007 which proves our government has been planning the collapse of the U.S. Dollar for over a year!

The bottom line to all this is simple: The U.S. dollar is going to be intentionally exhausted into worthlessness. Anyone holding any assets denominated in "dollars" such as Checking accounts, Savings accounts, IRA's, 401-K's, Pensions, Stocks, Bonds, Money market funds, will wake up one day to find all their "dollars" are no longer "money."

Those persons without gold, silver or foreign bank accounts denominated in foreign currencies, will be left instantly, totally, destitute; unless they accept the merging of the US with Canada and Mexico into something called the North American Union (NAU) and take the new AMERO currency for pennies on the dollar.

In one fell swoop, descendants of the money changers that Jesus Christ threw out of the temple, 2000 years ago, will have effectively stolen absolutely everything from us by causing our "money" to be no longer "money." We're talking the single biggest robbery/looting in the history of the world!

Don't take my word for it, watch the video below (and the photos below that) and see the new AMERO for yourselves.

Spread the word: Open foreign bank accounts and wire transfer US dollars to those accounts to be exchanged for and held in foreign currencies. It's the only hope you have of protecting what you've worked all your life for.


The US Secretary of the Treasury has informed the China Development Bank that the US has shipped $800 Billion of a new currency called the Amero, which is to be based upon the merging of the economies of The United States, Mexico and Canada into what is termed as The North American Union.

The current American debt obligation to China, currently based on the US Dollar, is now estimated to be the staggering sum of $2.5 Trillion, and which this new Amero will be exchanged for $400 Billion of this debt as the current American currency is set to be devalued by 50 percent before the end of the year.

Virtually unknown to the American people is that their current leader of the US Department of Treasury, Henry M. Paulson, Jr., has been tasked by President Bush to lead the efforts to join the economies of the US, Canada and Mexico and is also the head of the North American Development Bank, the bi-national financial institution established by the United States and Mexico to further the merging of their economies, and the leader of the Border Environment Cooperation Commission (BECC), the organization created by the governments of the United States and Mexico to further the implementation of the North American Free Trade Agreement (NAFTA).

This is important to note as the final provisions of the NAFTA Agreement were implemented on January 1, 2008, leaving only the final merging of the economies of the US, Mexico and Canada into a North American Union to be accomplished, of which we can read:

“President Bush is pursuing a globalist agenda to create a North American Union, effectively erasing our borders with both Mexico and Canada. This was the hidden agenda behind the Bush administration's true open borders policy.

President Bush intends to abrogate U.S. sovereignty to the North American Union, a new economic and political entity which the President is quietly forming, much as the European Union has formed.”

It is also interesting to note that American economists have been warning about the replacing of the US Dollar with the Amero, due to pressure from China, for nearly two years, and as we can read in this December, 2006 report titled Analysts: Dollar collapse would result in 'amero', and which says:

“As WND reported earlier this week, in an unusual move, the Bush administration is sending virtually the entire economic "A-team" to visit China for a "strategic economic dialogue" in Beijing Thursday and Friday. Treasury Secretary Henry Paulson and Federal Reserve Chairman Ben Bernanke are leading the delegation, along with five other cabinet-level officials, including Secretary of Commerce Carlos Gutierrez. Also in the delegation will be Labor Secretary Elaine Chao, Health and Human Services Secretary Mike Leavitt, Energy Secretary Sam Bodman, and U.S. Trade Representative Susan Schwab.

But Chapman doubts the trip will help the Fed to engineer a slow dollar slide.

How severe will the coming dollar collapse be?

"People in the U.S. are going to be hit hard," Chapman warned. "In the severe recession we are entering now, Bush will argue that we have to form a North American Union to compete with the Euro."

The prophetic warnings of these American economists are, indeed, coming to pass as during the month of September alone, 10 years worth of gains on US stock markets have been wiped out in their entirety and bank runs are now occurring in the United States for the first time since the days of the Great Depression leading to the failure of 13 banks, some of their largest, and the imminent failure of 117 more forecasted by the US government.

US Treasury Secretary Paulson, however, continues leading the charge attempting to force upon the American people the ‘final peg’ to their own demise by completely bankrupting the United States leaving no other choice but to completely discard the almost totally worthless US Dollar and its replacement with the Amero.

It goes without saying that the American people will greatly resist the replacement of their Dollar, but this cannot be said when tens of millions of them are without jobs and their life savings have become worthless leaving them with no other choice but accept what their own leaders have planned for them all along.

Posted by Defender of Liberty at 13:46

Thanks for reporting on this find Lee. This is sterling evidence (no pun intended!)of the conspiracy to defraud the American people.

Therefore, was the Global Financial Meltdown a failure that (like perhaps 9/11)has been seized upon by policy makers and One Worlders to create the Amero and implement it.

Or has the Meltdown been deliberately designed?

Now we have to tread very carefully here and avoid the pitfalls of oversepculation and making the evidence fit the facts (or even creating the facts).

If the theory is correct then the evidence will fit the facts without any kind of pushing and shoving.

In the meantime those critics who cried 2bullshit" should now begin to wipe the shit from their mouths...

Well interesting story, but count me out on this one. I think its baloney having watched the Hal Turner video. Loved the bit where he recommends buying sterling! If there is one other main currency more exposed to the credit crisis in the world than the uS dollar then this is it!

LEE BARNES, how can you know about the banking 'elites' control and manipulation conspiring to create the NAU and the pushing the NWO but you deny 911 was an inside job???

The BNP is making itself look ridiculous toeing the line of the criminal establishments official explanation that 911 was carried out by the fictional Al-Qaeda headed by CIA asset and business ally of George Bush Osama Bin Laden. The Bush's being close friends with the Bin ladens.

Examine the 911 physics, examine the masses of evidence. 911 was an inside job!

i Called the Denver Mint, They Deny Any Claim to The Amero Currency . . hmm, thats sounds like what they would say, but im just not sure, buy gold and protect your family.

This Amero coin is a "fantasy coin"
produced by a vintage coin press in a home workshop.