Creationism and The Materialists 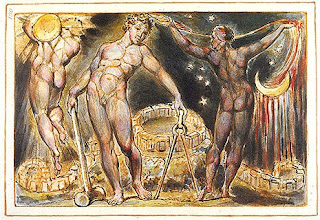 We dance round in a ring and suppose, But the Secret sits in the middle and knows." -- "The Secret Sits" by Robert Frost

The Creationist cranks say that the Bible is to be taken seriously as an exposition of the creation of the Earth and the Materialists say that Science can explain everything in the universe.

The first group are so obviously demented that they give the advantage to the Materialists who are demented in a much more subtle way.

Anyone who says the Bible / the Koran / Whatever must be taken literally and its statements and texts as a direct statement from God about how the universe was created and how we must live is a nutter.

Either god is an idiot, a liar or a fool or the people who believes such bollocks are the idiots.

The Bible / Koran / Torah / Talmud / Whatever - are not books that reflect reality, they are books based on internal spiritual revelations of imperfect human beings and therefore (as they exist as products of imperfect and sinful human beings according to their own beliefs) are imperfect visions of a perfect god.

Just as the sciencists says in the Heisenberg Uncertainty principle that scientists create the outcome when they measure something, the same applies to religion.

Just as scientists can never fully understand reality as they themselves are part of reality and affect reality by interacting with it, the same applies to religions as the 'prophets' and people that create and write those so called holy books are themselves part of nature - AND ARE THEREFORE FLAWED CREATIONS WHO CAN ONLY HAVE FLAWED VISIONS OF GOD.

What is born of Man cannot perceive or describe the perfection of God.

Therefore all visions of god and all holy books are imperfect.

The fact that scientists cannot even define such things as dark matter, dark energy, non-locality or even how many universes their are, means we should not take them too seriously either.

Both religions and science are cults, with their own creedos and fanatics.

But at the very core of their teachings they are both talking bollocks.

Both dance around in a ring and simply mutter ever more complex gibberish to explain their stupidity.

It is the tragedy of the 20th century that we have been trapped between the lines of war between Science and Religion.

With the religious fruitcakes on one side and the scientific extremists on the other, the truth has been trapped in a Urizenic net - almost as if planned by some demiurgic force that seeks to keep small, weak and an slave.

The religions call us sinful creations, slaves to a hateful god and that Man taking charge of his own creative self evolution is a sin, whilst the scientists call us a naked slave apes in a material universe devoid of any meaning ruled by unconscious impulses focused on sex and eating.

Both are vile visions of Man and his place in the universe - both of them see us as slaves and unable to attain higher evolution through self evolution.


I see both visions as aspects of the same demiurge - the poet William Blake foresaw that the demise of christianity through science would lead to a dictatorship of materialism - that the fall of the Pope would lead to Stalin.

That as religion gave way to science a new abomination would arise out of its ashes to ensure Man remained as a slave forever.

The time has come now for the end of the dictatorships of religion and materialism.

Man must become his own God.

Man must begin he process of his own higher self evolution.

First man must shed himself of the visions of slavery that hold him back, and this means the focus of his strggle must be for higher self evolution first as an indvidual and then as a race and species.

Man must transcend this level of humanity.

No more children must be born disabled and suffering - with genetic engineering we can cleanse the entire human DNA and gene lines of all inherited diseases and thereby create a higher human race from this mishapen wreckage we call humanity.

If God made man then he must have been a dodgy engineer - as the man he made is a flawed thing iddled with inherited diseases that strike the innocent. If god made man, then man must perfect gods vision.

If Materialism made man then this imperfect creation must be transcended through our own efforts - we must perfect the flaws that Nature created.

Man must fight disease in all its forms - and at the same time must also demand that all humanity live in harmly with Nature and the planet - the Natural Order must replace the New World Order.

Those that spawn beyond the carrying capacity of their own lands must be given a choice - either accept contraception, education and limits to their demographic growth - or they must simply be left to starve.

No more must we subsidise such reproductive irresponsibility - those in the developing world that take development aid and yet still spit out ten children should not be subsidised to continue breeding.

Either live in harmony with their environment - or perish in the disasters they create for themselves through such feckless and irrespnsble breeding.

The end result of both religion and science will be the death of the planet, the destruction of the bio-sphere and the extinction of Man.

They are both insane ideologies which together will destroy us all.

The time has come for Man to break free from both, and to see in himself his own salvation.

Only when the vision of a Higher Humanity replaces the death cults of religion and science will Man and the planet survive.

Man must never agin be ruled by priests, kings, popes, Imams, Rabbis, economists, scientists and the whole system of demiurge slaves - Man must seek self evolution and the Higher Humanity as the way out of his prison cells.

Only when the first child is born who no longer carries a single gene that carries an inherited illness, disease or disability will Man be at the brink of liberty.

Until then we are all the slaves of slaves.

Life itself is the manifestation of the divine within the material universe.

The creation of the universe was a divine creative act, and that the laws of physics and evolution were put in place as mechanisms to ensure the creation of life.

Man is the bridge between Life and the higher divinity of the Spirit - and Man himself must see himself and in his existence as becoming the pathway to the divine spirit.

Only when Man becomes united with that divine spirit, will the true meaning of the universe be revealed.

The true meaning of the universe is the objective incarnation of the divine creative spirit in the soul of Man - and Man and God will become One.

Until then the meaning of life is Mans struggle towards Self Divinity through creative self evolution.

It is this struggle that defines Mans greatness.

" Onwards and Upwards to the Perfecti ", must be the cry of all free humans until that first perfect being is born and the first step is taken towards that Great Race of higher humans to come.

Posted by Defender of Liberty at 00:18

scientific extremists? These people work hard to understand the natural world and you call that extremism?

Science isn't perfect, but it is responsible for much of the good in the world (speaking of medical science that is). Science has also answered questions that not even religion has been able to. So I can't say that science leads to any type of destruction.

The KJB accurately sets forth the 1st and 2nd Laws of Thermodynamics, Nehemiah 9:6, Isaiah 51:6, i.e. it is scientific.

William Thomson, better known as Lord Kelvin, was a strong creationist Bible believer. Engineers and other technologists use his work, e.g. the Absolute Temperature Scale, every day. They don't use Darwin, by contrast. Thomson was also responsible for various technological inventions that at least indirectly are of benefit today.

Another creationist Bible believer was Charles Babbage. Without his pioneering work, no-one would have a pc.

No man by his own efforts is going to get to God. His ultimate destiny is a hole in the ground. That is why God manifested Himself as the Lord Jesus Christ, to overcome this otherwise insoluble problem, 1 Timothy 3:16.

I agree with your other remarks about religious counterfeits, e.g. popes, the Qur'an, rabbinical tradition etc. Although we don't reflect on Hinduism a great deal, given the focus in the West on the Muslim menace, India is a perfect example of the conditions your describe. Everyone, whatever their occupation or social standing, fears Kali and Kali's priests, according to a missionary friend who spent time there.

The Jesuit 'reductions' of Paraguay in the 17th-18th centuries were another example. The SJ were the first to impose a Marxist-style society and later trained Marx and Engels.

See Vatican Assassins by Eric Jon Phelps. You can get it by googling the title.

they dont just work hard to understand the natural world, they also seek to impose a materialist view of the universe and mans place in it that degrades Man himself.

We are not just naked apes, slaves to sexual desire and unconscious drives in a meaningless universe where we exist without souls or hope in an entropic existence.

That is a sick view of man and as extreme as the islamists in its warped hatred of man.

Science without any respect for man or the planet is the source of atomic bombs, germ warfare and industrial pollution.

Science is only as good as the scientists - and as they are men it is just as evil as men.

As much good it creates, as much evil it creates.

As you know - I love Christ but despise the Churches.

I chose the Christos over the Church and the Bible.

I respect all people of good heart of all faiths who are spiritual but I also mistrust all religions.

Points taken, although the Lord said "If ye love me, keep my commandments" John 14:15.

I think it is fair to say that a genuinely beneficient God would provide His created beings with some means of responding to Him.

That is where I believe the KJB comes in - not the modern counterfeits, though.

As to science Vs Religion. Allah/JC might help you deal with someone dropping a shell on your house (if you survive) but if you want return the favour you would do better with Newton.

Whats 'neo' about paganism - or Heathenism as I prefer it.

These are all mainstream eugenics just able to be accessed by the mainly rich or wealthy few - all people across the planet should have access to such facilities aa a reward for stopping pumping out excess numbers of kids.

1 child of higher genetic quality with no inherited diseases raised with a decent standard of living than the parents had is far better than ten children riddled with disease living in poverty who will die of famine due to over population.

That is simple rationalism.