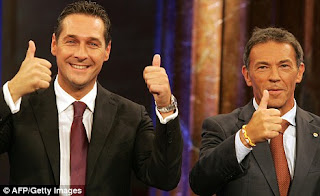 Image - the men who will save Austria and sweep all the crap from their country, from the communist scum to the conservative traitors and the immigrant parasites.

The three articles below are all written by the reactionary conservative supporting media scum of the British newspapers.


The fact is that the media are mechanisms of social control, they do not print the truth they merely print the bullshit required to get the lemming like masses to vote for the political parties they control.

The media are pimps and the political parties their whores.

They attack the Nationalists in Austria as they want to keep the present corrupr political conservative and communist cabals in power.

An academic that writes for the Daily Mail attacking nationalists is merely another reactionary whore working for the system.

Posted by Defender of Liberty at 01:42

Labels: The Daily Mail, the telegraph, The Times