Obama and the Media Coup D'etat 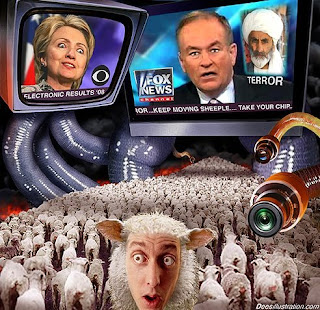 For those who dont know it , we do not live in a democracy. This is because it is not the will of the people that elects political parties into power - it is the media.

We in fact live in a Mediaocracy, a system where the media barons and media organisations decide who gets voted into power.

Here is how the Media does it ;

The media create what is called THE CONSENSUS on virtually everything in our nations and societies.

The Consensus is our perception of what our society is, what our role is in it, what is happening in our society, what problems afflict our countries and what political parties should be elected into power to control our countries.

Most people are in fact as dumb as sheep.

They are educated, but they are ignorant.

The ignorant are often wise, but the educated are mainly slaves, for they are those who let others do their thinking for them.

In a media dominated society, the most educated are usually those who let others do their thinking for them.

For example - put an the average educated British person on a plane and parachute them into the heart of Africa and they will die within a few days, but an indigenous African who may not be able to read and write or use a mobile phone and drive a car will survive.

This is because he may not be able to read and write, but he is wise.

If Plato were put into a time machine and sent to today he would not be able to read English, use a mobile phone, flush a toilet or use a DVD player - yet he was wise.

Our society has produced the most educated idiots in history - sheep who allow the media to tell them what to think and who to vote for.

They are in fact slaves - for anyone who allows someone else to tell them what to think, what to wear, what to eat, where to go on holiday and what party to vote for is not in fact fully human - they are ciphers, empty vessels for others to fill with their crap.

We have gone from physical slavery to mental slavery.

At the moment the media are all on a 'Obama Love In' with all the media liberals pimping out Obama to the masses, like Al Capone once used to pimp out whores to the masses.

The most amusing part of all this obama hysteria is simply that not one of the mainly cringing white liberals know what he stands for or why they are voting for him.

With sounds remarkably like the bleating of sheep they all go 'baaaa baaa' and say ' he stands for change'.

Ask them what 'change ' is and they stand their and gulp like goldfish in a deoygenated goldfish bowl.

Gulp, Gulp, they go until their trendy glasses go all steamy and they go red.

You would get better comments from a sheep to be honest.

The very fact that these idiots still trust the media, the same media that said Saddam had weapons of WMD and who beat the drum for the war in Iraq that has killed over 4,000 Americans - means the educated can always be relied upon to be stupid.

Obama is the final nail in the coffin of democracy, for his victory will ensure the final triumph of the media over democracy.

All other presidents after Obama will be media owned whores, and democracy will become simply mediaocracy.

The very fact that Gwyneth Paltrow is voting for him and endorsed him should ensure that real people think twice - with Hollywood and the Media running America then the entire world is screwed.

Their is simply something absurd about the multi-millionaires of hollywood supporting a candidate who supports undiluted socialism.

When you get the super rich supporting a socialist candidate then something stinks.

Whoever you vote for in the mainstream parties is simply a puppet, the only candidate that would have saved America from the media is Ron Paul - and the media told you not to vote for him.

Now you will get what you will deserve - the end of democracy itself.

The American Dream is now an abortion in the dustbin of history.

Chuck Norris has a good article on BO.