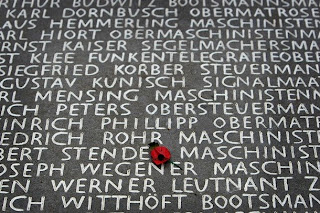 I want you to imagine an alternate reality.

In 1944 Hitler won the race to develop the nuclear bomb and dropped it on Moscow.

The US, after bombing Japan with their nuclear bombs, declared a truce with Germany and surrendered the UK, their allies, to Germany.

The Germans then tried Churchill in a war trial for his bombing of German cities and the targeting of civilians in places such as Dresden which were victims of the 'Bombing Holocaust'. Other British soldiers were also tried and hung for rape, the murder of surrenderd German soldiers, war crimes and other breaches of the Geneva Conventions.

British officers such as Bomber Harris, who drew up the mass bombing campaign plans also joined Churchill in the dock. All were hung on a chill Autumn morning before the world media.

Sections of the British Army such as those in the Special Forces, who had fought battles whilst not wearing uniforms, were declared as war criminals for not abiding by the Geneva Convention.

Mmebership of such groups was made a crime.

A journalist from The German Sun goes undercover and infiltrates a commemoration service run by the last of the British soldiers and special forces troops for their fallen comrades.

In a quiet war cemetary in Shropshire the last of the old soldiers gather to remember their brave dead comrades.

Many admit that in war cruel and vile deeds were done by all sides including the British, yet all those present are proud of their service to their nation and honour the memory of those brave young men who fell in the service of their nation.


Yet instead of leaving these old men with their memories to honour and revere their comrades in private, a jumped up journalist prat from The German Sun newspaper wants to write a sensationalist story to demean both the living and the dead, so he infiltrates the event and writes a story that highlights the ignoble and criminal actions of the few during the war in order to demean the many who fell and who fought with honour and bravery during the war.

The few young men at the event who are there to physically protect their grandfathers and friends from the physical violence of the red communists and anarchist mob of terrorists that turn up to attack the frail old men year after year, are targeted by the journalist and called criminals instead of brave young patriots defending the honour of their families and ancestors.


This is what would be happening today if we had lost the war.

Whilst the idiot newspapers like The Sun harass and intimidate and hound old men of Germany, they never write articles about the terrorists of Irgun and The Stern Gang who are still alive and living in comfort in Israel, their hands bloody with the murders of British troops.

Whilst the Sun slanders the old men of Germany, it never investigates the criminal communists who raped their way across Europe in the dying days of the war or who executed any nationalists in Finland, Estonia, Poland, Germany and the rest of the Soviet Union who dared defy them.

Whilst The Sun attacks the old soldiers of Germany it never investigates the criminals in the European Parliament who served in the communist regimes across Europe and who still are involved in politics today.

It is time that Germany and the German soldiers of that era were left alone.

Whilst the racist targetting of the German people for endless abuse and terror is allowed to go on, the war criminals of the world who are Jews, Black, Muslims and all colours and creeds are ignored.

History since the Second World War shows us both that the Holocaust was not uniquely evil and that all ideologies and races are capable of genocide.

The Gulags and Laogia killed 100 million last century in the name of communism, yet out universities, media and politics are infested with communist apologists and activists.

Capitalism has caused more deaths due to its greed and exploitation of the environment than were killed in world war 2.

Liberalism has aborted 6 million babies since 1967 in the UK alone, a deeply symbolic figure not just as it equates to a Holocaust but because it almost directly matches the number of immigrants allowed into the country since then.

For every immigrant in the UK, a British baby was aborted.

That is the crime and shame our nation will always bear.

Yet liberals, communists and capitalists feel that they have some sort of moral high ground on which they stand upon in order to hurl abuse down at the Germans.

They ignore Pol Pot, Rwanda, the plight of the Palestinians and the myriad other genocides just to slander the Germans.

The time has come to tell the British media that slanders only the Germans to fuck off.

They attack the Germans simply because they know that the only racial group they can attack in our twisted 'multi-cultural society' is whites and the only nation they can racially slander as a people is Germany and the Germans.

The Sun is run by the 'Red Bitch' Rebecca Wade who was once arrested for domestic violence and assault against her boyfriend, the idiot Ross Kemp, as a result of a drunken argument.

Wade is a supporter of the Labour Party.

The paper is owned by Rupert Murdoch a Labour supporter. The paper even alows that complete prat David Blunkett, the crook and adulterer, to write columns in the paper.

Blunkett is a member of the Labour Party and a government minister at the time when Labour began the illegal war in Iraq which has resulted in war crimes against the Iraqi people - and The Sun newspaper propagandised the war in Iraq for the Labour government, acting as the Der Sturmer of the New World Order as it embarked upon its oil wars.


Anyone who buys the stinking rag should be ashamed of themselves.

Leave the old men of Germany alone you Red Bitch.

Posted by Defender of Liberty at 01:05

The journos never report on who brought Hitler to power either. The Vatican Against Europe by Edmond Paris is a good study in this respect.

There is a big difference between what really happened sixty years ago and the hollywood/tabloid version. The hollywood version delightfully told for instance in that great movie ' The Sound of Music' shows plucky Austrians taking on the might of Hitler. Reality... in internationally supervised elections 98% of Austrians voted to unite with Germany. Germans in every hollywood movies are evil. Well in my experience they come in all shapes and sizes and are as kind and funny as any Brit.
Throughout the war the Germans referred to Churchill as a "war criminal" , Britain and the US were "plutocracies" ( still true today),and the US airforce were ,"luftgangsters". Ten times as many German civilians died in WW2 as British civilians and the USAF and RAF killed over 60,000 French civilians in air attacks.
The war would have been ended in 1943 and many millions of deaths avoided if Roosevelt and Churchill had not insisted on unconditional surrender. If you as a nation are going to loose everything you had to go on fighting.