The Sinking Of The Nancy 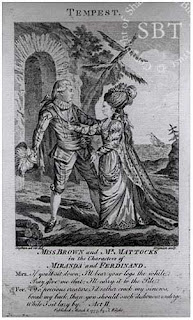 This engraving, by C. Grignion after Dighton, and published in The Universal Magazine, records the production of The Tempest at Covent Garden in 1776. Miss Brown was the maiden name of Mrs Ann Cargill (c.1759-84).


The Sinking Of The Nancy.


When the full moon illumes a storming sky,
And a spring tide rides abroad, angry and high,
Upon the wild bleak shores of West Rosevear,
That windy scilly island of wild sea birds,
Basking in the gulf stream off the Cornish Coast,
Fisherman still at sea say you can hear,
A faint oratorio, the song of Titania,
From that dark comic opera of Henry Purcell,
Drifting and lilting within the wailing wind,
As the restless ghost of miss Ann Cargill,
Floating amidst the flotsam of ancient cargo,
Escapes the drowned wreck of The Nancy,
Driven to its cruel doom in a winter storm,
Her most precious treasure cradled in her arms.

From scandals in Britain she had fled
With Captain John Haldane snug in her bed,
Securing her freedom within his wooden walls,
Of the sailing ship he commanded, The Fairford,
Ploughing the waves as it sailed to the East,
Cannons primed for any pirates it may meet,
Until she docked amidst the cotton clippers,
Whose masts rose like a forest from the waters,
Upon the shimmering sands of busy Bombay,
Then at the whim of the whig William Pitt,
Who took umbrage at her social conquest,
Again she was forced to leave India and flee,
From the wealth and fame that she had craved,
Adored and feted, but abused and defamed,

Upon The Nancy with the wind in her sails,
Returned to England with her fortune made,
The ship was filled with treasure in its hold,
A precious cargo amassed, a fortune in gold,
Her whole life ahead of her, glory and fame,
Merely a mile from shore, the tide shifts again,
With the shore in sight the storm took her life,
As it sunk The Nancy before the harbour lights,
The back of the boat broke with a loud groan,
The timbers snapping as if brittle bone,
The crew sank screaming beneath the waves,
As Ann and John boarded the last boat left,
But were washed into the waters by the tempest,
Then vanished swiftly from site, into the night.

Now when a winter storm wracks the night,
And white horses crash the black rocks,
Of Rosevear Island, that lies empty still,
Then she can be seen in a white chemise,
Floating in her shift amidst the waves,
As a pale rose adrift upon the foaming waters,
Amidst the dead of the sea's slaughter,
Bobbing as apples in a wooden barrel,
Drifting in the tide, trapped in the channel,
Some say they have seen her climb the rocks,
Singing to the baby she holds aloft,
And all who have heard her distant dirge,
Never forget her sweet and mournful words,
As the song of the Fairy Queen fades away.

Posted by Defender of Liberty at 11:40