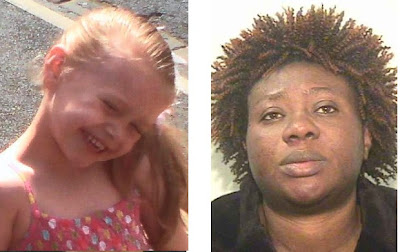 Image - If she had not been in the country, then this would not have happened.


This idiotic bitch is only in the UK because the far left filth organised a campaign to keep her in the country.

Therefore the Far Left filth are as guilty as she is, as she would not have been in this country if it were not them.


A woman saved from deportation by a high-profile campaign has been jailed for ten months after killing a child while driving without a licence.

Four-year-old Caitlan Fitzhugh, of Coronation Street, Openshaw, was walking hand-in-hand on the pavement with her mum Stacey Strutt when she was hit by a Ford Transit van which mounted the kerb.

The van careered into the youngster after being hit by a Ford Focus driven by heavily pregnant Eucharia Jakpa, who had no licence.

Jakpa, who along with her then unborn baby were unhurt, had only taken a driving theory test at the time of the accident but had been driving around unsupervised.

Her car had 'L' plates on at the time of the smash.

At Manchester Crown Court, the 40-year-old of Kenyon Street, Gorton, was jailed for ten months after admitting causing death by careless driving and banned from driving for five years.

Jakpa, an asylum seeker from the troubled Delta region of Nigeria, came to Britain in 2004 claiming that her family was facing persecution and violence because of her husband's political activism.

Who else has beeen locked up in July? Sentences and photo gallery

She said that her husband and daughter had disappeared, presumed dead, and that she and her young son Timeyi faced torture or murder if they were forced to go back.

In 2007, less than two years before the smash, she was saved from deportation by a community campaign and won indefinite leave to remain in Britain.

The court heard that on the morning of September 11, 2009, Caitlan was walking down Parkhouse Street, Openshaw, on her way to the doctor’s surgery.

Witnesses describe seeing Jakpa make no attempt to brake or slow down as she approached the ‘Give Way’ junction with Parkhouse Street from Greenside Street.

She ploughed into a Ford Transit being driven by Darren McDowell down Greenside Street seconds after he slammed his foot on the brake in a desperate bid to avoid the crash.

The van was sent careering onto the pavement by the force of the collision where it hit Caitlan and her mum. They were just 500 yards from their home.

Miss Strutt escaped with injuries to her knee. But her daughter Caitlan was fatally wounded and died in hospital at 10.40am, just over an hour after the accident.

Adrian Farrow, prosecuting, said: “Miss Strutt had no forewarning. The moment she heard the impact of the two vehicles the Transit van had collided with her and Caitlan.”

When interviewed by police four months after the crash Jakpa sought to blame Mr McDowell for the accident and claimed witnesses had ‘manufactured’ their accounts.

But earlier this month she abandoned that version of events by admitting death by careless driving.

Andrew Nuttall, defending, said Mrs Jakpa felt ‘real and heartfelt remorse’, but had originally struggled ‘getting to grips’ with the fact she had taken a life.

He admitted she had ‘behaved badly’ by seeking to blame the other driver. But he maintained that the ‘committed Christian’ had understanding of the ‘enormous pain’ felt by Caitlan’s family, since her husband and daughter had been killed in Nigeria.

He added that Mrs Jakpa, who has two other children, knew ‘there’s going to come a day when she’s going to have to explain to those two children what she has done’.

Mr Nuttall said: “Something happened at that point where she went through the ‘Give Way’. No-one in their right mind would do that – you risk your own life and other people’s lives.

“She's gone through this a million times but she has no answer, she simply can’t explain it and can’t understand it.”

Mrs Jakpa was charged with causing death by careless driving rather than death by dangerous driving after the prosecution accepted that she did not go through the junction deliberately or maliciously.

In court the case was judged to be the second most serious category for an offence of this kind, and so carried a sentencing range between a community order and two years, with a typical starting point of 36 weeks.

Had Mrs Jakpa been convicted at a trial she would have received 15 months, but because she pleaded guilty she was entitled to a third off, bringing her time behind bars down to ten months.

Sentencing Judge Robert Atherton said: “Your remorse has been slow in coming. I accept it must be very difficult to come to terms with the fact that your behaviour has led to the death of anyone, particularly a child, but to me you have exhibited not just a sense of that difficulty but gone beyond it.

“You have sought to blame others and impugn their integrity.”

Posted by Defender of Liberty at 08:36

Ye, just seen that on a face book link

This is endemic across this country immigrants maiming and killing by reckless driving..

In the same city enriched by The Labour Regimes Extreme Left mass ethnic cleansing programme we have a young man stabbed to death walking home with his girlfriend stabbed to death by a GANG ..NO MENTION of ethnicities...

Let me get this straight. Since she lost a husband and child others should feel sorry for her when she kills someone else due to her own stupidity? Would they feel sorry for Caitlin's mom if she snapped and hurt Jakpa because of what she did to her daughter?

Will you tell us "my father voted Lab/con/fib when it is your little girl ??