The image below of is todays Dudley EDL demonstration.

Note the black uniforms, the para-military boots, the truncheon and think to yourself - who are the real fascists ?

Is it the EDL or the Police ?

Yet again it was the blood of White English men and women that flowed from wounds inflicted by the weapons of the police.

It is the bones of our own people the police break as they defend the Islamists.

The police are deliberately attacking the EDL in order to provoke a reaction, so the politicians and cops can work together to pass new assembly laws to restrict free speech and the right to protest.

The corporate media peddle the police lies as they want the whore political parties they pimp out to gain support, so they assist the police and government in telling lies about the EDL.

That is how the traitors within our nation work - the traitors are the government, the ACPO gauleiters and the cops that turn their truncheons on their own people. 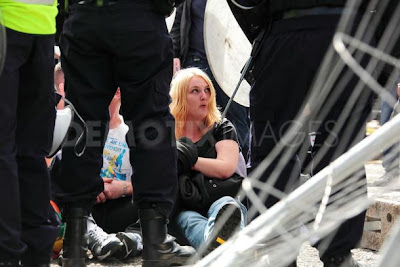 Posted by Defender of Liberty at 14:17

What if they target individuals,volatile carefully selected individuals just like Roal to go on that rampage.

I was giving it some thought last night after writing just a few of my own experiences.
Ill give you the full story one day mate,If you knew it all, even you would be fkn gob smacked I promise.

C.P.- Don't pick on just the average dweeb who will just fold, lets go after someone with balls !!

When the list of Common Purpose Graduates/organisations were publicised on the net a few months ago, I found out that the facility that started the problems and has been part of it right the way through, is backed or should I say in bed with and is infested with Common purpose graduates.

Check my Avator out, I didnt always look that way, I swear ;o)

As anyone had problems with their computor after going on the EDL section on Facebook?

The EDL will insist on marching under the Rothschild banner,

Masonic Globalist bankers are doing this to them.

Divide and conquer is all they know and since the BNP went down the pro-zionist route, its become evident in the party.

So Lee were you actually at the EDL march yourself?