Negrophilia and Obama the racist 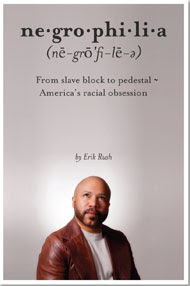 Image - Eric Rush. He is black so he cannot be a racist as only whites are racists right ? No doubt he will be called a 'self hating black' by the liberals, white scum and profiteering race relations industry extortionists in the black community.


An alleged incident of police brutality in Indianapolis has produced a 15-year-old with a swollen eye and a chipped tooth, a police officer recommended for firing by his own chief and more publicity for Rev. Al Sharpton.

It's typical and "shamelessly ironic," says an author whose red-hot book on race is framing the long-simmering debate in fresh and highly provocative terms.

"It is undeniable that police occasionally exercise undue force when interacting with citizens of all ethnic persuasions, and that the Indianapolis police involved in the beating of Brandon Johnson may or may not have done so," said Erik Rush, author of the new WND Books title "Negrophilia: From Slave Block to Pedestal – America's Racial Obsession," which continues to chart at the tops of Amazon categories on Discrimination & Racism and African-Americans.

"But there's the rush to judgment of this as a racially motivated incident; this is by no means certain, yet it's taken as a given," he said.

"Sharpton," Rush continued, "whose very claim to fame is having attempted to frame police officers in New York of assaulting a teenage girl – for which he was found liable for damages – can always be relied upon to weigh in on such issues, exacerbating and misrepresenting them in order to ensure his continued perception as a leader of the black community, as well as his continued income."

The only persistent "disparities in racial justice" in America concern perception, said Rush, which is distorted by the prevalence of negrophilia, "an undue and inordinate affinity for blacks," combined with the "reflexive demonization of whites as inherently wicked."

Rush maintains that most racial discord is high theater – the result of carefully orchestrated or exploited events. Undergirding the drama is negrophilia, rooted in leftist tactics of division and aimed at advancing policies that keep blacks "obedient," whites "silent" and "political control” secure.

To expose how negrophilia is implemented, Rush has pledged to adopt a Glenn-Beck-style blackboard approach toward revealing the intents and tactics of the "professional race-baiters who seek to manipulate, intimidate and subjugate Americans of every color."

Sharpton's "victim-mongering" is but one example of negrophilia's tentacles, Rush maintains. After noting the kneejerk cries of racism in an Obama graffiti incident at a Bronx firehouse as a "Pavlovian response in line with far-left racial orthodoxy," Rush sees negrophilia contaminating the debate around illegal immigration. At the recent U.S. Social Forum in Detroit, Elena Herrada, a community activist, attacked Border Patrol agents.

"There's no place for the Border Patrol in our communities," Herrada stated. "When we go into our restaurants and there's border patrol sitting there, would you sit next to the Ku Klux Klan?"

"Ms. Herrada's sentiment," says Rush, "is indicative of the freedom that those who seek to raze America to its foundation perceive that they have. Indeed, they do have that freedom thanks to the racism of negrophilia that has been advanced in America whereby minorities are given inordinate deference and latitude on the erroneous premise that the majority has wronged them somehow. This woman is working toward border-state secession and 'repatriation' to Mexico, and Americans are expected to endure her derision and vilification, no matter how treasonous or seditionist it may be, standing on this absurd premise."

The flipside of negrophilia, ascribing capricious characteristics to whites, is insidious in how it absolves blacks of personal responsibility, Rush says. He cites a recent report in a suburban Chicago publication that racism explains higher infant-mortality rates among blacks.

A gathering of Chicago health-care professionals, which also produced the suggestion of equipping school vending machines with condoms to "take a more active role in realizing teenagers are having sex," arrived at a negrophilia-tinged consensus, says Rush.

Participants, reported the Kane County Daily Herald, "accepted racism as a contributing factor in that it's an actual, physical stressor that could result in premature delivery and low birth weights for babies with even the most successful black parents."

"The barometer that dictates what passes for 'racism' these days is ridiculously sensitive,” counters Rush. "The conclusion that the high infant mortality rate in this county is due to the racism of health-care professionals neglecting a class of people exemplifies the lack of accountability black individuals are expected to have, and places the onus of their welfare upon others, who are labeled as racists if they fail to bear the burden successfully."

Negrophilia is so institutionalized it's achieving colorblindness, Rush says, infusing even the flimsiest of grievances. He cites a recent $150,000 grant to study "systemic racism" by the Santa Cruz County Community Coalition to Overcome Racism.

The coalition includes involvement by the Brown Berets of Aztlan – known for adopting militant stances against police, immigration-enforcement officials and the Minutemen. The coalition formed, reports the Santa Cruz Sentinel, after a city councilman raised "questions about possible racial profiling of Latinos by police during Halloween festivities downtown in 2006."

While no official complaint of racial profiling was ever made, the Sentinel reports the councilmen's comments opened "a greater dialogue about the experience of historically underrepresented minorities," and earned the grant from the W.K. Kellogg Foundation. It will now examine incarceration rates and racial makeup of school-board representatives.

"Here we have a stellar example of far-left racists and racial separatists capitalizing on 'white guilt' and the misguided public relations policies of major corporations," Rush says. "The organizations involved – the Santa Cruz County Community Coalition to Overcome Racism and Brown Berets of Aztlan – run the range from hypersensitive 'diversity zealots' to overtly Marxist."

In 2008, Americans elected Barack Hussein Obama as the 44th president of the United States. Being a black man, of course this was heralded as a monumentally historic event—the first black president in a country that was segregated a scant 50 years ago. A historic event, yes, whether or not one subscribes to theories of underhanded race politics, the evils of affirmative action and the cult of victimization in which many hold that black people still live.

Yet, many were distressed by Obama’s election. Little was known about the man and his likely policies despite two published memoirs; his political history— and close circle of influence—evidenced the most far left liberal tendencies. Nevertheless, he campaigned as a centrist. But his appeal also appeared clearly—in black and white.

Negrophilia studies the undue and inordinate affinity for blacks (as opposed to antipathy toward them), that has been promoted by activists, politicians and the establishment press for the past 40 years and which has fostered an erroneous perception of blacks, particularly in America. The book dissects the dynamic of race relations and race politics with an emphasis on same since the Civil Rights Movement of the 1960s, how these are likely to develop given a Barack Obama presidency, and how conscientious Americans may discern the deeper truths of these matters and thus develop healthier perceptions.

Erik Rush was the first to break the story of President (then Senator) Barack Obama’s ties to militant Chicago preacher Rev. Jeremiah Wright on a national level in February of 2007. He writes columns for WorldNetDaily, has appeared on Fox News, CNN and copious radio shows. His other books includes "The Angels Fell, It’s the Devil, Stupid!" "Our Real Enemy and Why We Don’t Talk About Him" and "Annexing Mexico: Solving the Border Problem Through Annexation and Assimilation"—the 2007 New York Book Festival winner in the “Best Nonfiction” category.