My Script Idea for 'Predators Versus The Care Bears ' 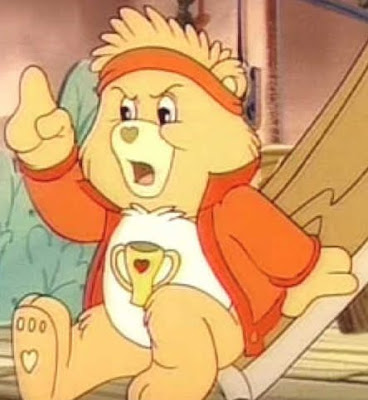 Image - Zionism, the leader of the colony of Care Bears on the planet Israel whose magical dance banishes the evil predators led by Palestinian and Whitey.


This is my idea for a Hollywood script for a new Predators movie.


On a distant planet somewhere in the universe called Israel, a peace loving colony of care bears living on a Kibbutz comes under sudden attack from an evil predator strike force.

We know they are evil as the main food on their spaceship is kittens.

We see a cute, little fluffy white kitten chasing a ball of wool down a corridor of the spaceship.

Then the kitten looks up in fear as one the predators reaches down, grabs it between his sharp claws and then eats it.

The predator then burps and a few strands of kitten fur belch from his monstrous maw.

The Predators attack the planet with nukes, missiles and big lasers.

The care bears strike back using only the language of peace and empathy as their weapons such as ;

" Cant we just talk about this like rational adults " as a predator chainsaws a tied up care bear in half and his plastic foam stuffing flies out from his dismembered torso and all over the walls.

" You are only hurting yourself you know " as a predator rips a care bears head off and then eats it.

Labels: Predators Versus The Care Bears

Go On a Writing Course said...

Lee, have you ever considered becoming a novelist?

You already write a blog, you are a man of words, a man of the pen. Becoming a novelist is the next logical step.

By becoming a novelist, you will have the potential to reach a wider audience and you could use your novels to transmit the ideas on your blog to a larger number of people. People who wouldn't normally be inclined to read a blog such as this. People who wouldn't normally be open to the ideas of the BNP. You will have to write under a different name of course. Also a chance to get paid for what you write and if your novel is popular, there is a chance it could be turned into a film!

So how do you feel about becoming a novelist, Lee? Would you do it for your country?