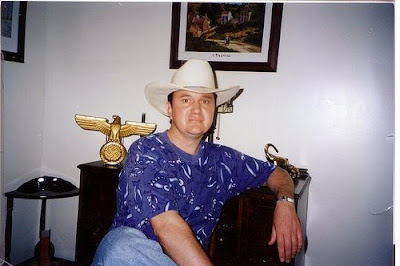 Image - the latest rat to flee the sinking ship of the BNP.

I was present at the AC meeting when Arthur Kemp was invited to attend and present himself as a possible BNP officer.

The AC discussed Arthur joining the party, but many on the AC including Martin Wingfield, stated that due to Arthurs past he was too controversial to get involved with the party.

Arthur agreed with Martin and stated that he would not join the party or take up any roles with the party.

I then said that we should give Arthur a chance and allow him to join the party and see what happens.

This was then agreed by the AC.

It was my intervention that got Arthur his positions in the BNP.

But what was the first thing Arthur did when he took over the BNP website - he removed me as a writer from the site.

Arthur acted as a treacherous, self serving little lickspittle to Griffin - and he now gets his payback.

What with Green Arrow, Golding, Dowson and Kemp all gone - what a delicious turn of events.

All the time Kemp was in the BNP, Griffin used to call him a 'smug sociopath who hates everyone and everything and who thinks he is intellectually superior to everyone'.

That was Griffins opinion of Kemp.

At the same time Kemp despised and mistrusted Griffin.

Thats the senior ranks of the BNP for you - filled with dishonourable, back stabbing, egotistical sociopaths appointed by Griffin.

Never mind - the rats have fled the sinking ship and soon the captain will go down with it.

That was Griffins plan all along though.

As he told me on frequent occassions - " I will destroy the BNP before I allow anyone else to lead it ".

And the plan is about to come to fruition as the party is made bankrupt.

You want to know the real reason why Kemp is leaving the party - because Kemp knows that he and all the other senior officers will be liable for Griffins debts when the party is bankrupted.

( on a side note heres an example of Griffins stupidity. After Barclays shut down the BNP accounts, I negotiated a deal with Barclays where they agreed to wipe off six grand of debt owed to them if the party just allowed them to shut the accounts down and I drop the complaints I made against Barclays to the FSA. I told Griffin about the deal I had agreed with Barclays, and he said " Tell them we want fifteen grand as well as the debts wiped off " and the result was Barclays saying 'no deal and we also want our money you owe us'. That was Griffins brilliance in action ).

This is being done so Griffin can have his 'seed money' to set up his replacement for the BNP, which is civil rights group, which was a group whose role and functions I formulated and proposed to Griffin years ago.

Kemp is leaving the party as he knows that the senior officers are liable for debats accrued by Griffins stupidity - and that Griffin will not pay a penny as he has given all his assets to his wife.

He stabbed the people who helped him in the back in order to ingratiate himself with Griffin.

Arthur Kemp a genius - yeah, but only in his own mind.

Shit! So the BNP could go down the drain? Then we need a new nationalist party.