The Japan Earthquake - a spiritual perspective 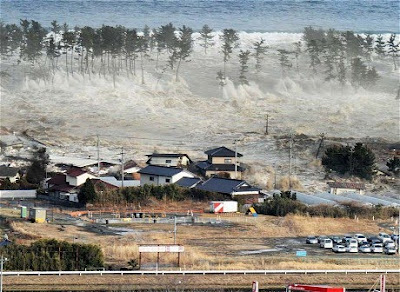 IMAGE - the tsunami rolls in from the sea. If there were no homes and towns built on those coastal flood plains, then no natural disaster would have occured.


I have just been watching the chat show with Nicki Campbell on the Japanese earthquake where it had the usual spokespeople for RELIGIONS, say that the disaster was Gods will, and the ATHEISTS who say that the earthquake proves God does not exist.

They are both wrong.

We see men in frocks wearing the logo of their own particular religion, and none of them have any spiritual wisdom or insight. They regurgitate the dead words of their dead religions to their slaves and call that 'truth'.

They are hollow vessels, empty of the divine , creative, evolving spirit who make their money and who gain their power and position by pouring out poison into the minds and souls of their own particular slaves.

The problem is that SPIRITUAL WISDOM is not part of religion and nor does SCIENTIFIC KNOWLEDGE equate to spiritual insight.

Religions say 'God created the earthquake' - and this is total bollocks.

Earthquakes are part of the planets natural processes, they have nothing to do with God.

The earth and all its natural processes have nothing at all to do with the active influence of God. God does not control events on earth, nature and man do.

But neither do these natural processes of our planet prove the non-existence of God as the atheists claim when they say ' if god created the earth and man, then why does he allow suffering and natural disasters'.

God does not create 'natural disasters' - man does.

God does not want man to suffer, mans suffers because of mans own actions.

Take the Japanese earthquake - if you watch the footage of the Tsunami and the earthquake you see a natural process underway. The earthquake produced a tsunami.

The human deaths caused by the tsunami and the earthquake were caused by mankind building homes, train tracks, towns and cities on the flood plains alongs the coast of Japan.

Mankind did this due to population pressure in Japan.

The deaths in the cities of Japan were caused by buildings built by man that collapsed due to the engineering weaknesses and structural inadequacies of those buildings.

If man had not built homes on the coast of Japan and not built sky scrapers in the cities, then the people that lived on the flood plain and who lived in those buildings would not have died.

All natural disasters are not created by God, they are products of mankind.

If man lived in HARMONY with nature, then the natural disasters would not exist - they would simply be natural events.

The more that man reproduces out of control, and intrudes into flood plains on the coasts of regions that are liable to be hit by tsunamis and the more man builds sky scrapers that cannot cope with the shocks from an earthquake, the more 'natural disasters' will occur - as the very definition of a natural disaster is that humans have died.

God does not want man to suffer, man creates his own suffering by living in such a way that the harmony of nature is disrupted.

If Japan had a population of three million people living far from the coast and in buildings that were not sky scrapers and the people of Japan lived in an ecologically sustainable society in accord with the natural carrying capacity of the Japanese natural environment, then no Japanese people would have died.

No japanese people on the coast = no human deaths.

If man had not built badly designed nuclear power plants on flood plains by coastlines liable to be hit by a tsunami at some point in history, then a nuclear disaster would not have happened in the first place.

This is the same for every other nation on earth, from Pakistan when it had its earthquake to every other 'natural disaster' on the planet.

I have had over recent months a series of spiritual insights as to the nature of this planet and life.

I see a divinely created universe that runs and evolves via the dynamic principles of nature.

Man and life are the divine creations of a divine universe, but life exists in our universe as part of, and product of, nature - and nature is a series of processes that exist according to their own dynamics.

The earth is a Garden of Eden that mankind has turned into a dying compost heap.

Man has over bred and over reproduced and has destroyed the sustainability of the planet and the natural carrying capacity of the environment.

If mankind stopped acting like animals and breeding like animals, and lived in accord with the carrying capacity of the lands upon which they evolved to become races, then the earth would be a paradise.

But man is an animal and so we breed like animals.

Whilst we cull rabbits and neuter dogs, we throw billions of pounds in aid to devloping nations to sponsor their irresponsible breeding.

In the West we preach a new liberal gospel of environmentalism to the world, whilst we support mass immigration from the third world into the west that destroys our own national natural environments at the same time as we sponsor the over breeding of people in the deeloping world.

We feed the useless breeders of the world who then devastate their own nations and environments, and yet somehow the liberals regard this insanity as somehow moral.

It is not moral to encourage or assist third world people to have more and more kids that they cannot ever feed in their own home lands and that they cannot sustain through their own agricultural production - it is in fact a crime against humanity.

In the midst of a plague of rabbits, no-one goes down to the fields and feeds the rabbits.

Only man encourages his own species to destroy its own environment and planet.

The only aid that should be given to the developing world is aid linked with population reduction programmes - to persist in feeding people who are already starving and living in lands that cannot sustain their present populations in order to allow them to keep having ever more kids is to create the disasters that the 'charities' then exploit by demanding we fill their begging bowls and feed the progeny that then result.

The more money people donate to over populated nations whose people are already living beyind the carrying capacity of the land, is to create and perpetuate the suffering of those people.

We should stop sending food and start sending people to enforce sterelisations and vasectomies.

All religions are evil.

They do not act in accord with the divine creative spirit of the universe, they pimp out their own facile religious dogma and enslave people with it. That is hy they support aid and feeding the useless breeders of the planet, as they simply care about the numbers of their slaves in relation to the numbers of slaves other religions have and how much money they can extort from them to keep their priests, imams and religious leaders in palaces and pretty frocks.

Man must abandon religions and embrace the spirit.

Science is also evil, it is out of control and seeks only scientific knowledge not wisdom.

Science must define itself in relation to the natural environment and the sustainability of the planet. Knowledge must become tempered with the wisdom of the spirit.

SCIENCE MUST BECOME A TOOL OF HIGHER HUMAN EVOLUTION, NOT A WEAPON OF HUMAN AND PLANETARY DESTRUCTION.

Both science and religion are the death traps of the soul and mind.

Spirit sees science as an insight into the natural process of existence, so that man may use such processes to advance as a species.

Spirit regards science as a tool for mankinds higher evolution, not as an end in itself.

Spirit sees religions as cages of the soul. Every religion is the same demiurge in a different guise.

The global population must shrink to around one tenth of what it is now.

Then the planet will heal, and as mankinds numbers shrinks in every nation, then men will move away from coastline and cities that are the focal points of natural disasters.

This is the divine message from such 'natural disasters'.


Our thoughts are with the lost and the suffering.

Why did God make deseases? Doesn't sound like a very nice chap.

Mans role in the universe is to cure disease.

Thats what makes man special, that we can actively perfect the universe and ourselves via using our minds to cure diseases.

And by using our minds , I mean developing technologies via science that can cure disease and end suffering.

this woman predicts a major earth quake. a few days before japan

I agree with you.

I think man should adapt to nature and not adapt nature to man.

Overpopulation as been allowed primarily to feed consumerism /greed/provide cheap labour/consumerism and profits.

The liberals/Eu /Globalists / green industry that talk about and enforce 'environmentalism' are Hypocrites for at the asme time encourage mass movements of people/transient populations/ overpopulations across Europe and the Earth. Of coure 'Greenism' is all about maikig money and taking control of remaining resources and imposeing more control over people.

And also the fact that many parts of the world had been controlled by extremely incompetent, extremely inhumane and extremely irrationally greedy leaders. The world don't need to be directed or "helped" or ruled by insane leaders. More upright indidviduals need to be more aware of the danger of globalisation, muliticulturalism and extreme greed of certain tribes that misused political power or wealth to cause more harm to the world.