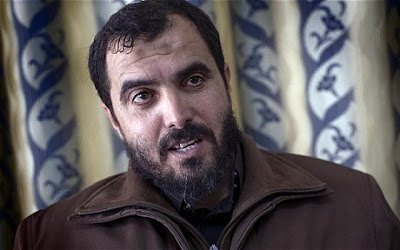 Image - The face of democracy in Libya

In an interview with the Italian newspaper Il Sole 24 Ore, Mr al-Hasidi admitted that he had recruited "around 25" men from the Derna area in eastern Libya to fight against coalition troops in Iraq. Some of them, he said, are "today are on the front lines in Adjabiya".

Mr al-Hasidi insisted his fighters "are patriots and good Muslims, not terrorists," but added that the "members of al-Qaeda are also good Muslims and are fighting against the invader".

His revelations came even as Idriss Deby Itno, Chad's president, said al-Qaeda had managed to pillage military arsenals in the Libyan rebel zone and acquired arms, "including surface-to-air missiles, which were then smuggled into their sanctuaries".

Mr al-Hasidi admitted he had earlier fought against "the foreign invasion" in Afghanistan, before being "captured in 2002 in Peshwar, in Pakistan". He was later handed over to the US, and then held in Libya before being released in 2008.

US and British government sources said Mr al-Hasidi was a member of the Libyan Islamic Fighting Group, or LIFG, which killed dozens of Libyan troops in guerrilla attacks around Derna and Benghazi in 1995 and 1996.


Even though the LIFG is not part of the al-Qaeda organisation, the United States military's West Point academy has said the two share an "increasingly co-operative relationship". In 2007, documents captured by allied forces from the town of Sinjar, showed LIFG emmbers made up the second-largest cohort of foreign fighters in Iraq, after Saudi Arabia.

Earlier this month, al-Qaeda issued a call for supporters to back the Libyan rebellion, which it said would lead to the imposition of "the stage of Islam" in the country.

British Islamists have also backed the rebellion, with the former head of the banned al-Muhajiroun proclaiming that the call for "Islam, the Shariah and jihad from Libya" had "shaken the enemies of Islam and the Muslims more than the tsunami that Allah sent against their friends, the Japanese".

Posted by Defender of Liberty at 15:32

You will have noticed the bruises on the true Islamic extremist forehead , as above; it is from butting the floor whilst praying to the Peadophile moon God.
Look out for it, you will identify a very dangerous individual.

So, the West i.e. the Globalist/Corporations/NWO as been using Muslim jiadhists/Terrorrists to take to destroy the West, turn it into a police state through the excuse of higher security, removal of freedoms , whilst colonising Europe with Muslims/and Muslim extremists , enhanced by the Euromed agreement , whilst they use Terrorists/ Al-Quida created by CIA? used to topple independent (of the Global Plan of the NWO)resource rich regimes elsehwere, to then later when installed as a (unstable) 'Muslim state' have it as a puppet government? Or indeed, when it casues trouble to enter that country and take it over. So the NWO can control over the country and the natural reources?


So Terrosrism as been in part created and augmented by 'the West''(Globalists,CFR,UN,Corporations,Zionists) to use for the purposes of exerting NWO global Governance and control at very level of life in the West and across the Middle east whilst turning Europe into some kind of future Muslim dominated Caliphate that will work hand in hand with their global communism/totalitarianism. Whilst freedom, democracy and the earth burns.