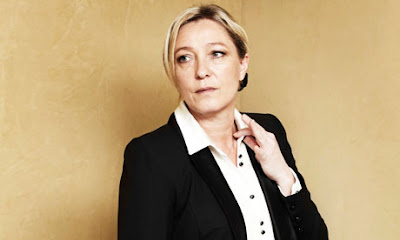 Image - the Joan of Arc of French Nationalism.


Marine is one of the new wave of Cultural Nationalists sweeping Europe.

The British Freedom Party is a Cultural Nationalist party and is being attacked by its enemies, left and right, as it represents as threat to them and their dead end ideologies.

We are the party of the future, the others the parties of the past.

Our Cultural Nationalist ideology will dominate British Nationalism within a year.

Marine Le Pen surveys the mountain of letters on her desk, complaining she's run out of autographed photos to send to fans. Although Le Pen fires handguns at shooting ranges for a hobby, Sarah Palin isn't an idol. Instead, she gestures out of the office window to a statue of Joan of Arc, the mascot of the Front National, which for decades under Le Pen's father, Jean-Marie, was the most successful far-right, xenophobic party in western Europe. Under the new leadership of "Le Pen, Fille", the party headquarters on a grey suburban street in Nanterre has been decorated with national symbols: a towering fibreglass French cockerel stands guard over a rockery.

But on her office wall, to emphasise Le Pen's plea that she is not antisemitic, is an abstract painting by an Israeli artist and friend. "It's called the top of the world because that's where she said I was aiming ... well maybe not that high! Ha!" Le Pen throws her head back and delivers her trademark Sid James laugh.

Le Pen, or simply "Marine" as the nation casually calls her, has sparked the biggest political panic attack France has seen for a decade. The "Marine effect" on Monday brought a historic 15% for the Front National in the first round of local elections, striking fear into both left and right for this week's second round. The 42-year-old, twice-divorced, mother-of-three is so popular that several polls show her topping next year's French presidential first round and sailing through to the final round run-off. She is on a crusade to "soften" her party and strip away the old overtones of racist, antisemitic extremists while defending the core of her father's nationalism, and courting a new white-collar electorate fearful of crime, immigration, Muslims and losing their jobs.

Le Pen, described by rivals as "the devil's daughter", a publicity-hungry, unreconstructed, far-right populist "more dangerous than her father", is also the photogenic face of the extraordinary soap opera history of the Le Pen family. She is the youngest of three blonde daughters who for decades were wheeled out by their father to symbolise the true French nation, and who were teased at school that "papa" was a "fascist". At eight, Le Pen survived a bomb attack on the family as they slept in their beds. Later, her parents' gruesome public divorce battle saw her mother pose in Playboy for revenge. All three Le Pen daughters publicly "lived and breathed the party", married and divorced Front National party workers, in Marine's case twice.

Trained as a lawyer, she has worked for the party machine for 25 years, and has now taken to the campaign trail with her partner, Louis Aliot, on the party's executive. "It's true that there's almost an intimacy between me and the French public. They feel a particular link to me because I'm not part of that self-proclaimed elite running France today," she said.

Le Pen's verdict is that France is on the brink of a revolution to rival that of the Arab world. Social injustice, people who can't make ends meet, a growing gap between rich and poor, and overwhelming disappointment with president Nicolas Sarkozy means France hasn't been this angry since the storming of the Bastille. "There isn't that much difference between the French people and the Tunisian people or Egyptian people," she said. "The French want justice - political justice, democratic justice, social justice - they want an end to double standards and they want some ethics from their political class. The French are suffering. They are permanently being asked to make sacrifices and yet there's a political-financial caste that is reaping all the benefits of the economic situation and awarding itself endless privileges.

"We're in a pre-revolutionary situation here. What's happening today resembles what was happening before the French revolution. I think the desire for a revolution like those on the other side of the Mediterranean exists here. Of course, I'm appealing for a democratic revolution – and that's also perhaps the role of the Front National – for a peaceful revolution by the ballot box, a patriotic revolution."

In 2002, France went into a meltdown of shock and shame when Jean-Marie Le Pen knocked out the Socialists and reached the presidential second round against Jacques Chirac. Le Pen senior, who holds several convictions for racism and anti-semitism, had called Nazi gas chambers a "detail" of the history and would go on to say that the Nazi occupation of France was "not particularly inhumane". Moderates vowed the shock would never be repeated. When Sarkozy came to power in 2007, he stole the Front National's anti-immigration rhetoric and seduced its voters. The FN, whose vote and finances had collapsed, was declared practically dead. But when the charismatic Marine took over from her father in January, everything changed. In 11 days this month, seven out of 12 polls forecast her not only reaching the presidential second round but beating her father's score.

Fiercely ambitious, Le Pen is not content to mop up the anti-Sarkozy "protest vote" but craves political power. For this, she must prove her party has changed. Her father led a movement of anti-system, extremist outsiders, from Catholic fundamentalists to monarchists who railed against the state and loathed the public sector. But Le Pen now styles herself as a defender of the republic, its benefits and welfare state, "the state as protector", she calls it.

But not benefits for all. French people must come first. She talks about "solidarity", says free-market capitalism is "the law of the jungle" and campaigns to protect teachers jobs from cuts. Half her new party members come from the left, she says. She is more liberal on abortion and homosexuality, and denies wanting the death penalty for school kids who deal hash. She warns the euro is "collapsing" and has promised to return France to the franc.

She makes her programme seem less shocking but the core is the same: immigration as a threat to the economy, security and culture of France, welfare chauvinism and benefits for the "true" French, gradual withdrawal from Europe. On the local election campaign trail in the FN heartlands of Provence, crowds give her a standing ovation after she warns of the "dilution" and "wiping out" of the French nation and civilisation, under threat from "never-ending queues of foreigners". Is this really a different party to her father's? "Yes, it probably is," she said. "Because for a long time there were lots of people who shared our opinions but were scared off by the image given of Jean-Marie Le Pen. They were reticent to join us. Now I'm at the head of the party, that barrier has fallen away."

Above all she wants to cleanse the party of overtones of holocaust denial and antisemitism. She fumed at Jewish associations who forced the cancellation of an interview with a Jewish radio station in Paris. "I just want to say to our Jewish compatriots they have nothing to fear, we are absolutely not antisemitic", she says. Recently, she recently said what had happened in Nazi concentration camps was "the epitome of barbarism".

Le Pen still makes references to the second world war, but targeted a different issue: what a growing number of voters complain about is the "islamification" of France. During her campaign to head the party, she compared Muslims praying in the streets outside overcrowded mosques in France to the Nazi occupation. She has criticised Halal-only fast-food restaurants. She couches all this in terms of defending "republican values", secularism and feminism in the face of religious extremism. She is setting the agenda on Islam.

Desperate to compete, Sarkozy's party has poached her ideas and will hold its own controversial debate on Islam and secularism next month. The Jewish umbrella association, Crif, and Licra, the International League against Racism and Anti-semitism, warned last week that Le Pen's discourse was "a threat to Jews and Muslims" and the far-right was scapegoating Muslims in the same way Jews were targeted during the antisemitism of France in the 1930s.

Asked about islamophobia, Le Pen's eyes widen. "But there's no islamophobia," she says. "People are just trying to recreate the conditions of a latent conflict aimed at making French people feel guilty. If you're in favour of respecting the law, you're an islamophobe! I'm not fighting against a religion. I'm like Richelieu, I'm fighting against the constitution of a state within the state. I think that French laws, values, principles should apply to everyone. And those who don't respect those laws and principles should be firmly made to respect them."

Criticism from political opponents is healthy, she says, but don't base it on "false accusations of racism, antisemitism and xenophobia".

"For 20 years in France, anyone who was against immigration was called a racist," she complains. But now she feels immigration is "perhaps the biggest problem of the 21st century". Hence, her visit to the Italian island of Lampedusa to inspect the flow of migrants from the Arab revolts. For her, immigration "has nothing to do with racism, it's an economic problem. It clearly affects our balance, notably the budget, it touches our identity, so I think we should be able to talk about immigration without systematically being accused of racism or xenophobia."

She adds: "The right-left divide makes no sense any more. Now the reality divide is between nationalism and globalisation."

Le Pen, a member of the European parliament, also says France's sovereignty has been "sucked dry" by the EU machine. France's cultural identity is also under attack from "a type of Soviet-style planning where we are seeking through massive immigration to weaken identities through a sort of general of multiculturalism where everyone suffers."

She wants immigration to stop and the specific differences between cultures to be preserved. "It's too much. There is a certain threshold above which the identities are shaken and collapse and we're setting up the conditions for a clash of cultures."

She says she does not want her party described as extreme-right, a "pejorative" term. "How am I party of the extreme right? ... I don't think that our propositions are extreme propositions, whatever the subject."

Intellectuals love to psychoanalyse the "raucous, tomboy" Le Pen, who looks uncannily like her father, with a similar gravely, cigarette-inflected voice, and whose trademark on TV is a beaming grin that infuriates opponents. Many feel she is driven by a deep need to impress her father and rehabilitate him in the public eye. Rubbish, she says. "I'm profoundly in love with my country ... I think politics is a virus, you either have it or not. And it's incurable." She does ask her father's advice. It would be ridiculous not to given his experience, she adds.

Le Pen's following is biggest among the working class, but she is attracting the lower middle-class and the women's vote. She is a feminist and long-time single mother heading a notoriously male-dominated, traditionalist party. But she feels this works in her favour. "I've always thought the French people are the least macho in the world," she smiles.

• This article was updated on 22 March 2011 to include additional material omitted from the print edition of the Guardian.

Posted by Defender of Liberty at 03:37

I suppose the calculated demise of the Griffin Cult BNP and the planned morphing of it into 'civil rights' org. is partly because it has failed its purpose or as been made to fail.

Then we have Marie Le Penn and FN ...
what an example for nationalists post BNP