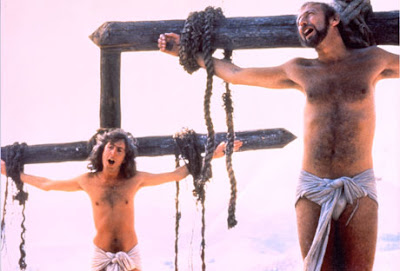 Image - He isnt the messiah, he is just a naughty boy.

Peace be upon him and Blessed be his name.

Woke up again and threw the curtains back expecting to see a whole new world outside my windows.

Yet again I was dissappointed.

By now shouldnt the angels have arrived, streams of milk and honey be flowing through the streets, an end end to crime and death itself, no more disease and poverty and a world where the white man can stop whipping himself for being evil racists who enslave innocent ethnic minorities ?

Oh well, at least the BBC can keep reminding me what day it is. Its day 6 of the 2009Post Obama Era.

The Black Emperor of Liberalism and his Empire Of Love that is the United States will solve all our problems - he is the Obama Messiah isnt he ? - he isnt just another naughty boy !

The BBC are thankfully keeping a tally of what day it is since the Obama Messiah got into office - it is now day 6 of 2009 PO.

I expect that any moment now miracles will happen and that Obama ( peace be upon him and blessed be his name) will change the whole world forever.

Lets ignore the fact that he already looks knackered, stressed out, out of his depth and looks as though he cant cope with the job already.

I detect a powerful psychological flaw in Obama and I suspect that before long it will be his wife running the US , not him as he wont be able to cope with the job.

The article below reveals that he is just another liberal fascist - telling people they cannot listen to the radio shows he doesnt like and that ' I am the President ' - what next a big silver necklace with the presidential seal on it made with diamonds and a jacked up convertible limo to pimp his ride as he blings the whitehouse up.


As the great philosopher Albert Camus wrote ' A slave begins by demanding justice and ends by wanting to wear a crown. He must dominate in his turn' .


Interesting article below with a great quote from Rush Limbaugh ;

His exhortation came as he enraged other Republicans by reversing George W Bush's ban on funding international aid to charities that perform or provide information about abortions.

After less than a week in office, Mr Obama's presidency is already encountering the very partisan bickering he had pledged to stamp out during his first 100 days.

He faces mounting criticism over his $825 billion economic stimulus plan, from Republican leaders who say the legislation has been drawn up without the input which Mr Obama had promised to allow them.

The president responded with a clear signal that he is prepared to ram the bill through without the bipartisan consensus he promised to construct, telling Republican leaders from the House of Representatives: "I won. I'm the president."

He then told them to break free of the confrontational mindset epitomised by Mr Limbaugh, the highest paid talk show host in America. "You can't just listen to Rush Limbaugh and get things done," Mr Obama said.

His comments followed a blunt attack on him by Mr Limbaugh, who declared on air that he hoped Mr Obama would fail as president because otherwise it will usher in socialism.

With characteristic robustness, he said: "We are being told we have to hope he succeeds, that we have to bend over and grab our ankles... because his father was black, because he's the first black president, we've got to accept this."
After the euphoria of his inauguration, Mr Obama's team have been handed a cold dose of political reality. A series of controversial policy decisions, mistakes and unforeseen events has brought home the difficulty of bridging the divisions in Washington.

Mr Obama has pledged to end the culture wars on social issues that have riven American politics for a generation and did not allow television cameras to film him signing the executive order reversing the Bush abortion funding ban on aid agencies abroad, in order not to provoke pro-life groups.

When he finally did sign the order he issued a statement in a bid to placate abortion critics by promising to "reach out to those on all sides of this issue to achieve the goal of reducing unintended pregnancies." He added: "It is time that we end the politicisation of this issue."

But despite his efforts, the reaction was brutal. Family groups accused him of plotting the "infanticide" of African children. Former presidential candidate Gary Bauer, president of the American Values pressure group, said: "It is both sad and infuriating that in the same week President Obama extended new rights to prisoners at Guantanamo Bay and began planning to release men whom we know have murdered Americans, he is preparing to sentence innocent children to death through abortion."

Meanwhile the decision by the Food and Drug Administration to approve the first human trials of embryonic stem cells, anathema to the Christian right, has intensified the bubbling culture war.

Republicans are also angry that the economic stimulus plan contains funding for contraceptives and other Democratic pet projects that might take years to have any effect on the downturn. The moderate conservative columnist David Brooks, who dined recently with Mr Obama, wrote: "The bill is an unholy marriage that manages to combine the worst of each approach - rushed short-term planning with expensive long-term fiscal impact."

Republicans are also criticising Mr Obama's decision to close the Guantanamo Bay detention camp with no plan for the detainees still incarcerated there and for forcing the CIA to follow stricter rules on interrogations. The revelation last week that 60 former inmates have returned to terrorism - and that one is now deputy leader of al Qaeda's Yemeni branch - was unfortunate timing for the President.

Other elements of Mr Obama's political morning after, like most hangovers, are self-inflicted. Having announced new ethics rules banning lobbyists serving in his administration, the president was immediately forced to make an exception for his deputy defence secretary William Lynn, who has lobbied for the defence industry giant Raytheon.

The president has also reacted badly to his first taste of tougher questioning from the previously supine Washington press corps - becoming visibly irritated, during a visit to journalists' offices in the White House, when asked a substantive question about the ethics affair.

The White House's failure to arrange for television cameras to record Mr Obama's second swearing in, held on Wednesday night because he and Supreme Court Chief Justice John Roberts botched the wording at his inauguration, infuriated broadcasters.

That incident has also sparked a predictable backlash from the Christian right, with commentators like Fiox News host Glenn Beck suggesting, inaccurately, that Mr Obama might not be a legitimate president because he did not use a Bible for the second swearing in.

A Democratic strategist who has run two presidential campaigns told The Sunday Telegraph: "What can I say? 'Welcome to Washington, Mr President'.

"They knew what to expect but they've had it all their own way for so long that the speed of it may have come as a surprise. The Obama people like a scrap, they've proved that throughout the year, none more than the president. But they know they're in a fight now. And it probably won't let up for eight years."

Posted by Defender of Liberty at 03:48

Type in Obama
alledgedly barak was given a choice ,to volunteer to stop practicing as a lawyer, or face charges of fraud.
seems they both no longer practice, despite the Media saying shes a lawyer.

It is Year Zero.

His inaugriation marked the end of America as we knew it and the start of a new era that will usher in a New America, based on socialism.

President Obama (have to admit the title and name are music to my ears) already told us he'd make decisions that many will not like. Even I don't like the idea of closing Gitmo. But I doubt that there is no plan on where to ship the prisoners. After all, it won't take a year for nothing.

I do agree that reality has set in for him. But that's not any different from any other new president.

go to this link, it explains how the democrats will effectively end conservative and right wing radio.
http://en.wikipedia.org/wiki/Fairness_Doctrine

WTF, at least El Rushbo is constitutionally qualified to be President!

UK, America and other places have already volunteered to take them in. plus they will eventually be given citizenship of those places and a heros welcome from the muslim supremacists living in the west.
61 of the released muslims have gone back to war against the west.