No Blarney From The Irish 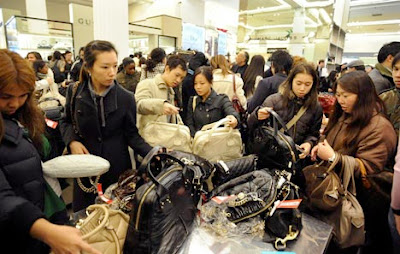 Huge areas of Britain have become foreign colonies. That could be tomorrow's Ireland, too

People in Britain and Ireland have taken a secret, Self-Denying Ordinance not to discuss immigration or race in any meaningful way

What most struck me while watching BBC television news reports of the Christmas sales in the West End of London, was firstly obvious, and secondly, it was something that no-one with the BBC would ever have remarked on. It was this. The shoppers -- and there were thousands of them -- were overwhelmingly of Asian or African origin. In the vast throngs of faces, there was barely a Caucasian face to be seen; and when there was, of course, that was no guarantee that it was British.

Actually, I didn't need to see those TV pictures of the London Boxing Day sales to be aware that London has undergone a demographic transplant unlike that experienced by any European capital since the Fall of Constantinople in 1483. A couple of years ago, while on a trip to London, I bought a rover-ticket, which gave me unlimited travel on the public transport system. I wandered for miles upon miles through the east end, which bore the blitz in 1940-41, which is the heart of Cockney culture, with the Pearly Kings and Queens and which is, of course, the setting for the television soap.

But in Whitechapel or Stepney, to judge from the shops and the faces and the clothes and the people around me, I could have been in a Middle Eastern city. What does "England" mean to these people? Do they know about the months that an earlier generation spent in the air-raid shelters? Do they know about the 40,000 Londoners who perished in the winter of 1940-41? Do they know anything about the history of the streets they now occupy, and could they ever be prevailed upon to care about it?

These areas were once home to the large Jewish population of London, who have since moved on, as did the Huguenots before them, and the Flemings before them. Like all great cities, London had always attracted immigrants, who have generally become assimilated into the population around them.

The immigration policies of recent British governments -- though "non-policies" would be a more accurate description of that mixture of cowardice, political timidity, abject conformism and flatulent piety that has underlain the British approach to this matter -- have now inverted the pyramid. Huge areas of Britain have become foreign colonies, which demographically and culturally dominate the native populations. This is not the much-cherished melting-pot of liberal ideologists: it is more like the race movements into Australia and the Americas from Europe, with the Aboriginals nearly as helpless as the wretched natives of those former colonies.

This time, it's a voluntary helplessness. People in Britain (and now Ireland) apparently have taken a secret, Self-Denying Ordinance not to discuss immigration or race in any meaningful way. The silence surrounding one most obvious transformation, that of Britain's Premier League, is one symptom of this. Perhaps a majority of players in any good English team will be of at least part-African origin. This is surely worth commenting on, for many reasons, not the least of them being the rapid disappearance of role models for white working-class boys; but around this issue, there is nothing but a prickly silence. So that when Michel Platini wondered about the relationship between: (a) some hypothetical Liverpool team of the future consisting entirely of Africans, and managed by a Brazilian, and (b) the traditional Merseyside community, he was roundly denounced by the soccer correspondent of 'The Daily Telegraph' -- no less -- for his implicit racism.

So is it better to say absolutely nothing when rapid racial changes occur in a society, in the hope that harmony will result? For maybe, simple discretion is better than noisy dissension, and a dutiful and prudent media silence on this topic actually furthers the process of peaceful assimilation. Well, firstly, that begs the question about whether a peaceful assimilation is either possible, or is even being sought, by many of the immigrants to Britain. And secondly, what damage is meanwhile being done to the credibility of the media? If journalists can tacitly agree to stay mute in the face of such clearly visible phenomena, who can then believe them on other, less obvious issues?

Is this of any interest to Ireland? Well, yes, not least because what happens in Britain today is what will usually happen in Ireland tomorrow; and of course, the two islands share a common-travel area, in which lawful residence in one jurisdiction conveys an equal right to dwell in the other. Now, I have long since lost any belief in the courage of the Irish media to tackle the issue of immigration, other than by showing cheery pictures of Nigerian children in hurling helmets (usually captioned, "The New Irish"), and by intoning the usual ritualistic pieties from within the comfort zone of the left-liberal consensus created by our journalism schools.

Listen: it is easier and cheaper to get from London to Dublin than to get to Liverpool or Newcastle. The shots on the BBC news from Boxing Day 2008 are just possibly merely a foretaste of RTE News on St Stephen's Day in 2018. So when the change comes, it'll be so fast, that you won't even know that it's happening: and then, it becomes then an irreversible fact. Just don't say no-one warned you: because, I did.

This is one of the best pieces of journalism I've read in years.
They'll get to him soon though I fear.