Taking Your Liberty With Lies - The US Draft 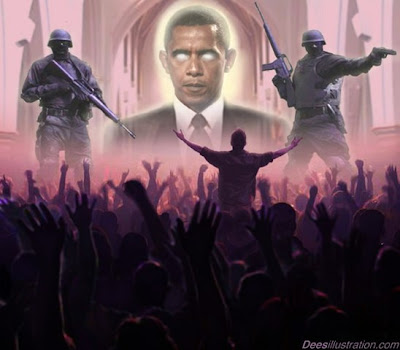 Am I a cynic for thinking that the easiest way to kill America's white youth is to condition and fill their brains with liberal bullshit and lies all the way through school then get a black president elected who declares that all US college leavers will have to do two years military service in a Peace Corps ( eg a rebranded US army - the happy smiley face of US Imperalism promoted with images of multi-cultural youth helping save crack babies in Harlem and helping farmers in a drought ridden Mid West - Bennetton Bullshit in army fatigues ) - and then send them straight to whatever war zone they need troops in or then order them to kill their own people in the US when the food riots begin.

You can just imagine the little brainwashed liberal lemmings, their eyes shining with Obama Messiah fervour, loading their M16's and shooting at demonstrators on American streets.

The article republished below entitled "Warning: The Impending Draft," February 25, 2004 , was written two years ago as a warning regarding the impending restoration of the draft. It is now more important than ever since the legislation that article predicted and warned about is now in committee and waiting to be acted upon. We had best become informed regarding its history, included in the 2004 article, and its present status in committee.

The official title of the Universal National Service Act of 2003 states "To provide for the common defense by requiring that all young persons in the United States, including women, perform a period of military service or a period of civilian service in furtherance of the national defense and homeland security, and for other purposes." (This legislation, also known as S. 89 and H.R. 163, will, for purposes of brevity, be referred to as UNSA2003)

Similar "draft" proposals have been in the pipeline for many years, starting with the 1962 Arms Control and Disarmament Act (1962 ACDA) under President Kennedy which called for "the disbanding of all national armed forces and the prohibition of their establishment in any form whatsoever, other than those required to preserve internal order and for contributions to a United Nations Peace Force." The UNSA2003 includes similar troublesome wording: "two-year period of national service that promotes national defense and homeland security."

Could this proposed draft legislation be related to this same 1962ACDA which called for national armed forces required to preserve internal order and contributions to a UN Peace Force? Could UNSA2003 be related to the controversial Patriot Act required to implement Homeland Security and Bush's "War on Terrorism," and his call for citizen involvement in Citizens Corp? With Bush I and II's emphasis on community service through their government-controlled "Points of Light" and "Faith-Based Initiatives" agendas, the possibility exists that UNSA2003, aside from its call to reinstate the military draft, will serve to mandate the Bush Family's "community service" agendas "in furtherance of the national defense and homeland security."

President Bush said last year ...I ask all Americans to dedicate two years of their lives, the equivalent of 4000 hours, to the service of our country...get them involved in Peace Corps, AmeriCorp, Senior Corp or the new Citizens Corp. As well-meaning as these service programs may appear to be, don't forget they are "government", not "private" programs and are only "voluntary" at the present time. The universal draft will "mandate" these community service programs in which case George Orwell's comment in his book "1984" comes to mind: "Uh...pardon me, sir....aren't you supposed to be doing your community service during this time period? Why are you working to put food on your own table, when there are many to be served? Only totalitarian (fascist and communist) governments mandate community service, also known as "slave labor." ( Maryland 's State Board of Education has started the ball rolling by mandating community service in order for students to graduate.)

The stationing of U.S. troops all over the world has resulted in this call for a draft. According to the Agence France-Press, November, 2003, "Republican Senator John McCain said we must deploy at least another full division to Iraq . This does not include the 15,000 fresh reservists the Pentagon is currently sending overseas... When the U.S. fought the first Persian Gulf War in 1991, it had ten army divisions ready to deploy at home as reinforcements. Today, there is just one division remaining in the United States and the United States reserves are stretched thin." Enter the "draft" legislation to take care of the problem.

During the Nixon Administration a "far-reaching proposal for a Universal Public Service System" exposed the hidden, long-term plans of our globalist leaders. A November, 1970 issue of The Scott Report said "A recommendation was made recently by a White House Task Force headed by Mrs. Winthrop Rockefeller, wife of the Governor of Arkansas and a political power in liberal Republican circles. The basic idea...is that all Americans, probably beginning somewhere between the ages of 17 and 19, serve their country for two years in one of a variety of areas, including health and social welfare programs, and the military... Drafted originally by the "Whiz Kids" of the Kennedy and Johnson Administrations (who drafted the Arms Control & Disarmament Act, ed) the new Universal Public Service proposal was proposed by former Defense Secretary Robert McNamara just before he became head of the World Bank. At the time, the plan received a cold reception in Congress and was shelved..."

Urge your elected officials to vote NO on S89 and HR 163.

Note: 170,327 American soldiers have been killed participating in UN peace actions which have little or nothing to do with national security (Korean War through Gulf War II: 1950-2004). This figure does not include those who later died from injuries received in battle.)

Current information regarding this bill:

Congressman Charles Rangel, a Democrat (NY), introduced on 14 February 2006 a bill (HR 4752) in the US Congress which requires: "all persons in the United States, including women, between the ages of 18 and 42 to perform a [two year] period of military service or a period of civilian service in furtherance of the national defense and homeland security, and for other purposes."

The bill applies to both US citizens and non-citizens, to men and women. There does not appear to be a provision which would exempt women who are pregnant and/or caring for infants/children in a young age. The bill also supports Big Brother. Those who are not sent overseas to the war theater would, according to the clauses of the bill, be inducted into the civilian homeland defense corps and other civilian duties, including the Citizens Corps, the "Neighborhood Watch Teams" and the "Volunteer Police Service" established in partnership with local law enforcement. (see www.citizencorps.gov/pdf/council.pdf)

While there was some media coverage of Rangel's initiative prior to the formal introduction of the bill, the matter has not been mentioned by the US media since it was introduced in February. There has been a deafening silence: since February 2006, not a single article or editorial has appeared in print on the Universal National Service Act of 2006.

Neither has it been the object of public debate. The bill has been referred to the House Armed Services Committee.......Readers can bookmark the House Armed Services Committee at www.house.gov/hasc/schedules and add their names to the Mailing List, to be kept informed of the committee's schedule. We need to get active, especially once HR4752 is scheduled on the HASC calendar. We also need to be alert if a bill or amendment is introduced mandating women to register for Selective Service.

I don't expect much to happen before the end of the year. However, if the same pattern is used that has often been followed in years past, this legislation quietly originated during the present Republican administration (already done), the next election will attempt to put a Democrat Congress back in control, they will activate and pass what appears to the uninformed public to be Democrat-originated legislation, the Democrats get blamed for the new law by an angry public who can think no deeper than what they are told is "partisan politics," so the following election they vote the Republicans back in ("because they are conservative"), and then the GOP will quietly implement the next round of government expansion! And the "puppeteers," who control both parties, further their agenda, one step at a time.
Posted by Defender of Liberty at 01:24

"While there was some media coverage of Rangel's initiative prior to the formal introduction of the bill, the matter has not been mentioned by the US media since it was introduced in February. There has been a deafening silence: since February 2006, not a single article or editorial has appeared in print on the Universal National Service Act of 2006"

From my understanding, this bill was satirical in the same way Jonathan Swift used A Modest Proposal. The problem was that minorities and poor/working class whites were taking most of the death hits in Iraq and Afghanistan (white working class males the most). If there were a draft, all youth could be sent off to war regardless of class. The bill never made it for obvious reasons...only certain people should be sent off to war.

My previous comment didn't go through (my computer). But this bill was a satire...not to be taken seriously.

I hope you are well,

Do you not feel that some sort of cult of personality is in development ?

P.S they are pretty rowdy bunch on your michelle watch blog arent they.

I would hate to be a male stripper at one of your parties - they would molest me.

Do you not feel that some sort of cult of personality is in development ?--DOL

On the part of some. As a matter of fact, I got into an argument with my younger sister's husband over this. He feels that Obama should have my unconditional support simply because he's black. But then there's the other extreme. The men in one of my discussion groups are 99% white. They bashed Obama with such virulence one would think the anti-christ himself became POTUS. This was in liberal NYC, can you believe it? My point is that extremists exist on both sides of the spectrum.

Atrocities? The only atrocities I've heard of were racist attacks against AA males after the election. The lone pro-Obama attack that I heard of turned out to be a hoax.

P.S they are pretty rowdy bunch on your michelle watch blog arent they.--DOL

Gina started Michelle Obama Watch. She's also the creator of What About Our Daughter's, blog. Regarding the women over there, look at it this way: The BNP exists to look out for and champion the rights of white Britons. When any group feels marginalized or attacked in any way, they mobilize to defend and advance themselves. Thus is the case for W.O.A.D.

I'm actually shocked that you decided to comment over there, LOL.

I would hate to be a male stripper at one of your parties - they would molest me.--DOL

But I bet you coudlnt protect me from those ferocious females on that blog.

I have seen hen nights over here in the UK and its frightening.

I bet even steve 'cock puncher ' segal could not protect me !