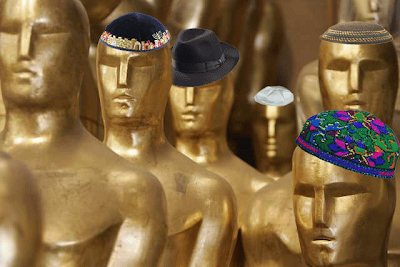 Hollywood is run by Jews.

Everyone knows it, but only Jews are allowed to say it openly.

Even if it is true and gentiles say it then they are defined as anti-semites by organisations like the ADL that dont want people to realise the disproportionate power and influence (in relation to their population size in America ) that Jews have in America and especially Hollywood ;


Personally I dont know why they are being so coy about it, seeing as every other community is expected to celebrate their communal identity and social successes.


Therefore the Oscars are themselves a reflection of the Jewish elite that control Hollywood.

Ricky Gervais even made a joke of this with Kate Winslett ;


The power of Hollywood is that it creates and defines American culture.

Therefore the films / propaganda put out by Hollywood are reflections of the way that the elite within Hollywood want America to be.

So the films that get chosen for Oscars are chosen not for their merit, but for their political value.

This is a film that is a barely veiled attack on the invasion of Iraq by George Bush and the theft of Iraqi oil.

Therefore as the Iraq War was supported by Zionist groups in America such as AIPAC, then Avatar was never going to win best picture. It won technical oscars, but that was because if it hadnt then everyone would have realised that the oscars were a total joke.

The Hurt Locker though was classic pro-war propaganda, with its gung ho all American hero surrounded by nasty Iraqi's.

So it was always going to win.

So with this analytical tool lets analyse the winners of the 2010 oscars for the real message behind the wins.

4) Performance by an actress in a leading role
Sandra Bullock in The Blind Side (Warner Bros.)

(Film about a white woman adopting a black guy. Classic 'hey whitey you are responsible for the black man' multi-cultural propaganda )


5) Performance by an actress in a supporting role
Mo’Nique in Precious: Based on the Novel ‘Push’ by Sapphire (Lionsgate)

(Film about life in the dysfunctional black ghetto. Seeing as Hollywood promotes negative stereotypes about blacks males in movies ( criminals, druggies etc) then it must balance this by rewarding black women with oscars. Though of course the primary 'bad guys' in virtually all modern Hollywood movies are whites, with blond hair, blue eyes and usually English accents battled by heroic blacks eg Will Smith, Denzil Washington etc etc )

( Far Right in power. Immigrants fitted up for a crime they didnt commit. Argentinian bad guys are far right supporters. of course it was going to win as it ticked all the right 'far right bad, immigrants good' buttons. )

( edgy, anti-consumerism, left wing cartoon to enable the corporate whores in Hollywood to still think they are 'edgy' and relevant to the lefty kids )


So there you have it.

The aim of Hollywood is to spread a 'kosher' version of American culture around the world.

Now you know how to analyse the oscars.

Posted by Defender of Liberty at 00:15

Since 1945 we have had thousands of anti-white anti-German movies from Hollywood all with a leftist agenda . The most horrible being Tarantino's " Inglorious Bastards " a wet dream for the ADL. The UFA studios in Berlin produced only one anti Jewish movie the infamous "Jude Suss" which when actually watched and it is on the internet thanks to the first amendment is rather tame and mild and was after all produced in the middle of a total war which ended in the total destruction of the German nation.

I have been following your blog for quite some time and find it an excellent daily read.

I am trying to puch the blog to all the guys n gals in my area.

Good analysis, Lee but I think that the Zionists involved are 'court Jews' who've made "a covenant with death, and with hell" Isaiah 28:15 and are overseen by Jesuits.

Jews are good at making money (which is why Gentiles envy them) and they are sharp at business. There's been a done deal somewhere, because the Vatican is very business-orientated. See The Vatican Billions by English historian, the late Avro Manhattan.

Note that virtually all of Holly(Hellish)wood's output is pro-Catholic, right from the days of Bing Crosby as 'Father' O'Malley in Going My Way?

Rupert Murdoch is a major player in the media. He is also a papal knight, a member of the Order of St Gregory the Great.

Although some H'wood stars were Jews (including Marilyn Munroe, I think), other big Hollywood personages like Bob Hope and John Wayne became Catholics before they died (not Jews).

I suggest this has to be included in the equation.

While not explicitly aimed at H'wood, Codeword Barbelon by P.D. Stuart will give a lot of insights into worldwide Jesuit intrigue.

I've concluded after having nearly finished the above that the centre of terror in the UK is not Jewish or Zionist, or even No. 10 Downing St. (though these could all contribute).

It is Stonyhurst College.

Note this para "I've concluded after having nearly finished the above that the centre of terror in the UK is not Jewish or Zionist, or even No. 10 Downing St. (though these could all contribute)."

"I've concluded after having nearly finished the above that the centre of terror in the UK is not Muslim or Zionist, or even No. 10 Downing St. (though these could all contribute)."

Sorry for the glitch.

We sure can't leave the Mozzies out of the equation.

Lee, didn't you watch the start of the Oscars? Steve Martin made a joke about the "nazi hunter" to Christopher Waltz of "Glorious Bastardos" stating "you want to hunt jews" and threw open his arms as to state, look this room is full of Jews. The audience loved it and applauded.