On law for them, one for us 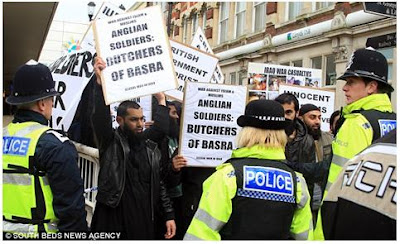 Image - protecting the supporters of terrorism.


If you are an Islamist you can do as you like and the law will protect you, but if you protest against the Islamists then you are arrested and prosecuted.

It makes you wonder just how long the government and its pet political pigs in ACPO can keep on trying to force the British people into being silent and impassive.

One day the whole thing is going to go tits up.

And very soon if they keep arresting people for expressing their opinions.

Hitler put people in camps and his regime fell.

The communists put people into Gulags and killed them for daring to express and opinion and their regime fell.

What makes the Liberals and Leftists think that putting people into prisons will keep them passive and silent.

Every revolution begins when the state demands the people stay silent and just do as they are told.


Two men who shouted "scum, scum, scum" at Muslim protestors during a soldiers' homecoming parade have been convicted of committing a public order offence.

Bryan Kelso, 27, of Hartley Road, and Kevin Carroll, 40, of Bollingbroke Road, both in Luton, both denied committing the offence in March 2009.

Magistrates in the town convicted the men following a trial.

They both received a nine-month conditional discharge and were ordered to pay costs of £175 each.

The men had denied using threatening, abusive or insulting words or behaviour likely to cause harassment, alarm or distress on 10 March.

The court had heard they were among a crowd of "25 to 30 hardcore protestors" shouting at Muslim demonstrators during a parade of the Royal Anglian Regiment.

Insp David Atraghji had told magistrates there were shouts directed at the extremists of "Bin Laden's wife is a whore" and "go and have a shave".
Kevin Carroll and Bryan Kelso
The men were captured by BBC News cameras covering the parade in Luton

He added he had seen finger and hand gestures, and the Muslim protesters were told in explicit terms by the crowd to "go home".

In a police interview, the court heard, Kelso said the protesters were abusing people he considered heroes.

"My intention was to give them a piece of my mind," he added.

"If they want to be like that, they should go back where they came from.

Speaking after the hearing, Supt Mark Turner said: "Luton town has enjoyed excellent community relations for a number of years but it seems last year a small minority came to the town to cause disorder.

"There has been extensive public consultation and work behind the scenes to strengthen community cohesion in the town."

Posted by Defender of Liberty at 14:42