The 'Benefits and Racism' Scam Revealed 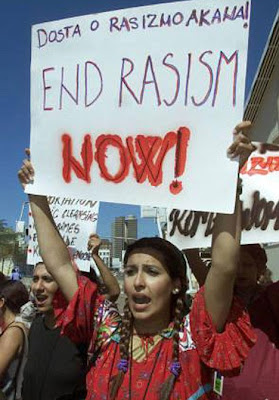 Here we see the scam in action in just one small group - and millions of people in the UK have done the same from every racial and religious group and every nation in the world.

Welcome to Mug Britain, the land of the cringing mugs that vote Labour and Tory and Liberal and UKIP and Green as they are too gutless to vote for a party that will deal with the problems as they are scared of being called 'racist'.

The only way people can get away with such abuses of the system is because the fear of being called 'racist' means they suspend all critical thought and actions and assume that if such people are challenged or censured, they themselves will be condemned for doing so.

In effect the anti-racist propaganda has created an 'ethnic / racial and religious elite' who are above the law because those that are supposed to apply the law refuse to do so or refuse to act in an impartial and critical manner as regards the actions of those from such groups.

You deserve all you get you mugs.


A campaigner for Roma gipsies' rights has been charged with helping scores of Romanians illegally claim millions in benefits.

Lavinia Olmazu, 30, and her boyfriend Alin Enachi, 29, are said to have masterminded a scam by which 172 Romanians claimed £2.6million.

Olmazu, who was arrested last week, was working as an 'inclusivity outreach worker' to Roma gipsies for both Haringey and Waltham Forest councils in North London.
Fake documents: Lavinia Olmazu allegedly helped Romanian migrants to claim millions in benefits

The academic, who has campaigned for greater understanding of gipsy culture, is accused with Enachi of using a supposedly charitable organisation called Roma Concern to help coordinate the fraud.

The couple appeared at Westminster Magistrates' Court on Friday alongside six gipsies, each of whom is alleged to have pocketed thousands of pounds from the scam.

Under rules introduced when Romania joined the EU in 2006, Romanian migrants cannot get a National Insurance number - which is the key to getting benefits - unless they can prove they have paid employment lined up.

Olmazu and her boyfriend are accused of giving unemployed Romanians false documentation which purported to offer them work. They are also said to have provided false invoices and references purportedly showing they were working.

The fraud was allegedly facilitated by Enachi, who attended Benefits Agency interviews with Romanians as a translator.
Alin Enachi is also accused of masterminding the £2.6billion benefits scam

Prosecutor Matthew McCabe revealed that over a 17-month period to last July, Enachi attended 356 interviews, mainly at the Jobcentre Plus office in Tooting, South London. And 172 of these individuals went on to claim benefit.

Mr McCabe said Olmazu 'saw Roma gipsies to advise them in how to apply for a National Insurance number and benefit'.

While the couple, who moved to Britain in 2007 and live in Woodford Green, Essex, were said to be living here legally, they appeared in court with six jobless Roma gipsies whom District Judge Nicholas Evans said had 'no right to be here'.

'This case concerns an organised campaign to obtain benefit. 'The two main defendants, under the umbrella of a supposed charitable organisation called Roma Concern, facilitated the obtaining of National Insurance numbers.

'The offences came to light as a result of an internal Department of Work and Pensions investigation into an unusually high number of applications involving Roma applicants.'

Olmazu, who has a ten-year-old son, has dedicated her life to studying Roma gipsies and has addressed the UN on their rights.

The defendants are all charged with conspiracy to defraud and fraud by misrepresentation.

They were all remanded in custody and will appear at Southwark Crown Court, in South London, on May 6.

The Charity Commission has no record of Roma Concern, but Olmazu and Enachi are listed at Companies House as directors of a company with the same name.

Posted by Defender of Liberty at 00:35

The name Roma means man in gypsy language, which is in fact a great conspiracy against Romanian people (Romania is the land of Romanians and not of gypsies who call themselves Roma, as well as roma has nothing to do with gypsies either).
So, please, be educated and do not use the term romanians when you mean gypsies!

You are so wrong!
The language is called Rromani Cib meaning Rromani language or vernacular for you gypsy language. Therefore Rrom/Rromni is correct and justified. These words are homonymous!! sorry for you man