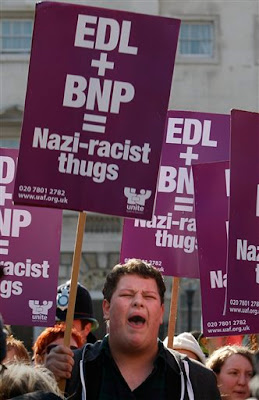 Watch this video to see the first signs of the coming New Class War ;


One one side you have the White Liberal Middle Class idiots of the UAF and their Middle Class Ethnic Fellow travelers and on the other side we have the EDL, a primarily White Working Class movement.

The New Nationalist Class War will be the White British Working Class, the White Nationalist Middle Class (of mainly disgruntled ex-Tories) and assimilated members of non-White, British, Christian, anti-Islamist groups (mainly Black Christians, people of mixed race and members of the assimilated British non-white groups who have been thrown onto the unemployment scrap heap by mass immigration mainly from White Eastern European nations) versus the White Liberal and Ethnic Middle Classes.

The UAF call the BNP 'racist' but the irony is of course that the real racist parties would support us staying in the EU.

The main numbers of new immigrants into the UK over recent years have come from White Eastern European nations, and these white immigrants have taken jobs from both white indigenous and non-white naturalised British citizens.

Therefore a truly 'racist' party would support being in the EU and limit the numbers of non-EU migrants coming into the UK as that way the numbers of whites in Britain would increase as immigrants diminish.


Whoever said the UAF used logic.

Instead they use dumb university students who really are to stupid to know anything other than what they have been taught by their lefty teachers and what they are told by their equally thick friends.

The UAF really are exploiting the stupidity of middle class youth.

Posted by Defender of Liberty at 03:16