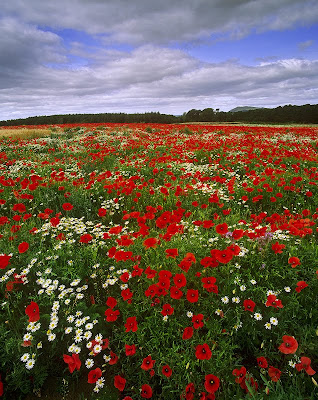 The latest Ted Hughes poetry prize goes to Alice Oswald with her book on flowers imagined as human personalities, but seeing as Tennyson wrote 'nature is red in tooth and claw' and even flowers must fight to survive - why does tedious romantic nonsense still get applauded.

Each living thing is a captive to genes that force it to devour other living things, to compete for life and resources.

Nature is not 'pretty', it is an eternal vortex of war and death.

Art is truth made beautiful.

Poetry must be the same, even when it horrifies.

This is a poem about how flowers really are, serial killers involved in an endless war for life.


Spring, so luscious in its golden light,
Starts anew the longest war,
As old as sun and moon, day and night,
And the clash of fang and claw.


The wolf flowers arise on thin stems,
To stalk in fields and woods,
And there where all the poetry ends,
They mock our pretty falsehoods.


For even the flowers are fighters too,
And die in their wilted millions,
Waging cruel wars over drops of dew,
And an inch to call a kingdom.


Daisies to me are the prettiest killers,
In their ruffles of white petals,
As from the wet soil they slowly slither,
To hunt the day as hungry jackals.


I have seen brambles choke an orchid,
As a serial killer in a meadow,
Until its fey beauty and life had faded,
In the Zen of slow death throes.


For wild nature is never a peaceful scene
The living kill if they wish to live,
Listen close and you will hear the screams
Of all those the world holds captive.

Posted by Defender of Liberty at 04:15

The Commies will put a stop to all that nonsense, once they have destroyed races and Nations, they will start cross pollinating all the flowers, animals and insects so there truly is no such thing as race or even species, then and only then will we all be equal.