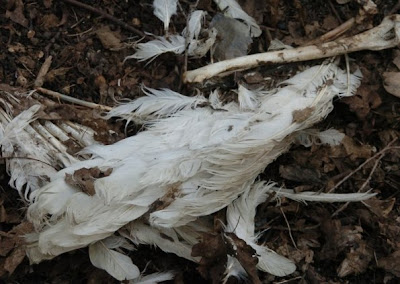 One morning along a misty riverbank,
I walked in an ecstasy of silence,
Seeking out a simple transcendence,
From all the profanities of the present,
By following the gentle waters flow,
As wherever it went, I would follow,
When I came across the cruelest crime,
The broken bones of beauty itself,
The ravened remains of a swan maiden,
Her flesh flayed and sanctity raped
Hanging from hooks on a fishing line,
Wings outstretched, as if a white cross,
A broken silver chain upon one foot,
And as I watched the life die in her eyes,
Framing all her agonies with a why ?
The rising sun set in its Eastern cradle,
And the day grew dark, malign and baleful.

Her partner was waiting nearby, weeping,
Afraid to leave, still loyally waiting,
For his love to return and end his misery,
And in an instant I saw the world as it is,
No longer hidden beneath veils of illusion,
For broken now was the spell of Lear,
And every strangers face passing by,
Beneath their make up, smiles and conceits,
Was withered and old, haggard and weak,
And I knew our nation was accursed,
That the future lay dead in its hearse,
And no more would the sacred marriage,
Offer hope to heroes on their journey,
And raise Albion to its highest heights,
For now must come the darkest night,
The sacred blood that stained our soil,
Means every sin is to be soon revealed,
And as pus oozes from a festering boil,
Sick souls will become their own gargoyles.

POACHERS using bread  attached to fishing lines are snaring and butchering  legally-protected swans from the River Nene in  Peterborough.

Witnesses say once the swans are snared by the barbed bread they are hauled to the shore and clubbed to death behind nearby bushes.

An examination of the klling grounds by The Evening Telegraph and the RSPCA uncovered the dismembered carcass of a mute swan and feathers and wing bones in bushes by a car park off Potter’s Way, Peterborough.

“Any bird that has been treated in such a way would die a terrible death and so I want anyone who sees this going on to get in touch with me or the RSPCA.”

Seems Labour was on the verge of a real communist takeover and the NWO shit itself and put their media into action after getting tipped of by special branch.

Also note how daves new baby and wife is getting much media attention even though it deserves none. This is now considered the big deal breaker in politics, if your wife has long legs and you can chuck out a sprog!

Yes that is how low `politics` has sunk! That is all the NWO propaganda machine is left with!

don't think the NWO are shitting themselfs in fear of a hung parliment where politicians that are not in the direct control of the NWO may actually vote as their constituents ask!

We used to mock the soviets with pravda, secret police state etc, looks like we had it all along!

I tend to think there is a lot of steering of the masses going on too, they must know Labour are finished and have decided to steer the herd towards Plan B, the conservatives.

Imagine the average householder getting a BNP leaflet through the door and a conservative one detailing why we should allow gay africans assylum, why muslim values are conservative values, or why Brtain should embrace Asian values, not the other way round etc.

Cameron on what he learnt from staying with a Muslim family.

Nick seems to distance himself from reality and sidelines Lee, Britains greatest nationalist!

Stop playing the bullshit game Nick, the truth has to out.

I am just a cog in the machine - we need to end the obsession with the cult of personality in nationalism and become a movement of activists, not cults around individuals.

I will link the article to my blog later.

Thanks for the link.

I also liked what Nick said: "Lee is a very strange and complex character." That made me laugh in a good way, I would take that as a compliment. If Nick said that about me I would be well chuffed :-D Lee you are a true individual.