A Big Thank You To The UAF and Weyman Bennet 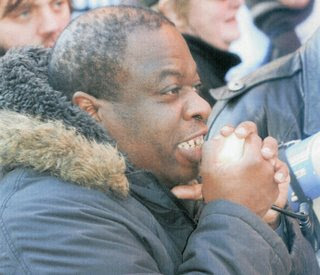 Image - Weyman Bennet "Will the fat bloke at the front of the demonstration please stop eating all the pies, as I am so hungry I am going to eat this microphone" Image - An UAF useful idiot doing great work for the BNP. Give that man another pie.


I most sincerely want to thank the UAF and Weyman Bennet for the UAF demonstration outside the House of Lords on Friday when they protested against the visit of Geert Wilders.

All the images in the media used by the press were images of the UAF demonstrators waving bright purple placards with BNP and EDL all over them.

Though it was UKIP and Lord Pearson who actually brought Geert Wilders to the UK, the images of the UAF protestors in the media with their lovely purple placards all managed to associate Geert Wlders not with UKIP but with the BNP.

If the placards of the UAF had said ' UKIP and Wilders = Racists' then UKIP would have been the beneficiary of all that media PUBLICITY.

BUT THANKS TO THE UAF AND THE MEDIA IT WAS THE BNP WHO BENEFITED FROM THE MEDIA PUBLICITY.

In the minds of the public it is the BNP, and not UKIP, who are now associated with Wilders.

The problem for the UAF is simple.

Wilders is massively popular not just in his own country but all over Europe and the world.

Therefore when the UAF demonstrated against Wilders they achieved nothing other than to reinforce the perception of a linkage between the BNP and Wilders.

The UAF achieve nothing with their demonstrations in relation to undermining the BNP - and all they have done due to their presence at the demonstration is ensure the tens of millions of British people who support Wilders now associate him with the BNP.

Thanks to the UAF, the UKIP got virtually no benefit from the appearance of Wilders, but the BNP did.

Now the other issue is this - why doesnt the UAF target UKIP as racists ?

It was the UKIP who brought Pearson to the UK and yet they have not attacked UKIP, but will attack Wilders.

Its because UKIP work with Searchlight and are therefore part of the UK Zionist Network.

Until the UAF start to wave placards attacking UKIP, then we all now know that the UAF are idiots - for we can say to the media 'the BNP didnt bring Wilders to the UK it was UKIP, so therefore if Wilders is racist then so is UKIP but why wont the UAF attack UKIP as a racist party - is it because they are idiots or just because they are using 'anti-racism' as a way to promote the policies of the Socialist Workers Party who run the UAF'.

Two lame ducks brought down with with just one shot.

So thanks to the UAF it was a win / win for the BNP and a PR disaster for UKIP as now whenever UKIP call the BNP 'racists' we can say 'if we are racist, so is Geert Wilders and yet you support him - so why is that UKIP ?' and also a PR disaster for the UAF as by demonstrating with the BNP placards they reinforced the public perception of a link between the BNP and Wilders.

Posted by Defender of Liberty at 00:37

pmsl, Thank You U fking Imbiciles, we should without any doubt buy them more pies :O)

UKIP faced severe problems having to pay the £500k fine. Then Lord Pearson makes an offer to Farage that he and his city contacts will bankroll UKIP and pay the fine if Farage supports him to become leader. We have heard nothing more about this fine since Lord Pearson became leader!

As soon as he becomes leader Lord Pearson immediately makes statements about Islam, introduces the UKIP ban the burkha policy and links Geert Wilders to UKIP.

The Zionists in Britain have seen it necessary to have an anti-Islam political presence, however the Zionists would never see the BNP as a viable political interest because as true nationalists we are as opposed to Islamism as we are to Zionism - both as lethal threats to Britain.

The Zionists in Britain like UKIP's Atlanticist position, therefore by usurping UKIP they have got the best of all options: UKIP are a pro-US, pro-banker party that now makes popular anti-Islam statements.

It is obvious that the Zionists in the media are behind UKIP; how the hell can Geert Wilders go on TV and call Islam a "retarded culture" and UKIP not be savaged by the media? Because the Zionist lobby are ensuring that Wilders and UKIP are free from media attack.

Moreover, the fact that UAF are not attacking UKIP for it's new found anti-Islam position and it's links with Geert Wilders proves that the UAF, despite public disagreements with Searchlight, are still very much under the control of the Zionists. This is the only explanation why the UAF are waving placards attacking the BNP when Geert Wilders was invited to the UK by UKIP. Although as you say Lee this was a major publicity coup for the BNP being linked with Geert.

The Zionists are trying to establish an anti-Islam movement, using both UKIP and EDL, whilst trying to ensure that this movement does not have a true nationalist core.

About 50 arrests were made, mostly those taking part in the protest organised by Unite Against Fascism, a police spokesman said.

All in all it looks like they had a good day ! IDIOTS INDEED.

In a recent liberal hand wringing interview with the far left BBC Bennett made a complete arse of himself. Apparently a live audience was left in hysterics when someone replaced Bennetts auto cue cards with a practical joke set, it went something like this when read aloud. "I am wee todd it, sofa king wee todd it"

UKIP are proposing to ban the Burkha, that will solve the demographic problem and stop us becoming a Muslim Majority within a few decades wont it.

Banning the Burkha will not solve the Problem, it will only make it slightly less obvious to the man in the street what the ruling elites are up to.

We now have Sarkozy saying the Islamification of Europe is innevitble.