A Storm in Lynmouth 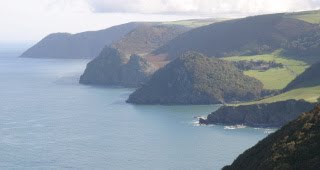 A writhing, driving, slashing whip,
Lashing where the waters swift,
A sea salmon in the rip, charging,
As might a stallion for a mare,
Seeking madly to let sighing slip,
Its precious milky mist of milt,
Into the wet slit of Lynmouth Bay,
Which sits in snarls of tree and bush,
Within a shade of lush jade banks,
Sweltering in a late May sweat,
As the lust of a louring storm passes,
Still lit with licks of lightning, overhead,
Muttering a sacred mantra of life,
Inside swollen sacks of mammatus,
That rattle dice of hail and ice,
As a moist misting drapes the dawn,
Soft as spiders silk upon the wind,
As meandering maenad’s dazed by love,
Lost to the world after a moon of passion,
Midnight in the arms of a handsome god,
In the hush of a sinister nemeton,
For the passing storm has hours since,
Raged and roared and drenched,
The high wide hills and witching moors,
Then swiftly ran into shallow streams,
Leaping forth, as a bellowing bull,
Angry as a serpent and boiling black,
In a deadly spate, a gush and gasp,
That gores and gashes at the flanks,
Ripping rocks and exposing earth,
Whilst the unbound surf rises expectant,
High upon its white chargers, lusty,
Sensing for itself the sacred moment,
Foaming and furious, it enters the bay,
Spilling over rocks, with spume and spray,
Ripping away veiling sea weeds,
And crashes upon the wet, black sands,
In a rage of spindrift, frothing white,
Soon spent upon the shore, rises anew,
Poised upon a peak, a perfect peak,
Waiting, waiting, to take that risk,
At the conjunction of moon, sun and tide,
And now comes the rain, gushing wildly,
A sudden revelation of river and sea,
The mystical moment of sacred union,
Which with sudden streaking spears,
The high tide lets slip its secret bliss,
And the sea salmon are set free to spawn,
To salt and seed the shining stream,
Slipping softly into the sultry Lyn,
Penetrating its clear, fresh folds of flow,
Blessed with a blush of late Spring,
Seduced by golden fingers of the sun,
Whose rays are sloughed from clouds,
And soft caress her thrilling sheen,
Enticing her to sweeten her still waters,
With the wild seductions of strangers,
So summer can sow her rushes with life.