Justice Collins - what a wanker 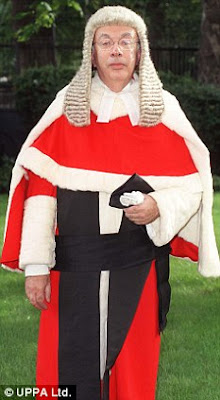 The problem in our country is not just the treason of the politicians, but also the treasonous Judges that infest the legal system.

Both must be rooted out.


If one wonders why Justice Collins love immigrant criminals so much, its because his law firm makes millions every year out of keeping them in Britain.

The more immigrant criminals undertaking such appeals and legal cases, then the more money the law firms and solicitors make from the British tax payers.

Keeping this immigrant scumbag in our country means the law firms like Herbet Smith that Collins worked for, make tens of millions per year from legal cases.

Also the fact these law firms that Collins worked for also have vast overseas offices means they are encouraging the scum to enter our country and then working for them when they are here ;


Herbert Smith LLP is a London-headquartered law firm, with an Asian practice, plus offices and representation in the Middle East and Europe[1]. The firm was founded in the City of London in 1882 by Norman Herbert Smith and today has 240 partners and 1,300 fee-earners.

The firm has offices in London, Brussels, Paris, Madrid, Moscow, Dubai, Hong Kong, Shanghai, Beijing, Singapore, Tokyo, Abu Dhabi and Bangkok, with an associated office in Jakarta[1]. The firm also has an India practice which operates out of its international offices[2].

After initial specialisation in the early part of the 20th century in company flotations and advising mining companies, the firm's more recent work focuses on a combination of litigation and corporate work (M&A and equity capital markets in particular). Other practices it has include finance, real estate, energy, and competition[3].


A convicted rapist facing deportation has won a High Court battle to be allowed to stay in Britain so he can get married.

Alphonse Semo, a refugee from the Democratic Republic of Congo, threw his victim on a rubbish tip when he 'had finished with her'.

But last night he won the right to remain in the UK for his wedding, just hours before he was due to board a plane back to Africa.

A judge said it was difficult to have any sympathy for Semo, who was jailed for eight years, but he must be allowed to stay.

Mr Justice Collins said the Home Office had at first agreed to let the 53-year-old, from Deptford, south east London, get married to his long-term partner, a German national.

Then the wedding was effectively cancelled by a subsequent decision 'by the same Home Office - no doubt by a different department', he said.

The judge added that he was 'very reluctant' to intervene but said the Home Office could not be allowed to play 'hot and cold'.

The judge said: 'With considerable reluctance, I have to say he must be allowed to marry.

'That means there will be a prohibition against removing him.'

The judge said the Home Secretary would have to reconsider later, after the marriage, whether to make a fresh attempt to deport Semo.

That would engage issues of EU law as his bride-to-be, Bunsana Kalonji, is a refugee from the Congo who became a German national. The pair have a long-established relationship.

Once married, the pair are expected to claim that Semo is legally entitled to remain in the UK as the spouse of an European Economic Area national entitled to free movement within EU member states, including the UK.

Semo was sentenced to eight years' jail in December 2002 for raping and assaulting a 38-year-old woman in Rushey Green, Catford, south east London.

The trial judge said of the rape: 'You added to that the degradation of throwing her on a rubbish tip once you had finished with her.'

His refugee status was revoked in June 2008 and the Home Secretary made a deportation order.

After finishing his prison sentence, he was detained pending deportation.

Since then he has successfully fought a series of legal battles to stay in the UK, the latest of which centres on his wedding plans.

Posted by Defender of Liberty at 04:07

The same Judges that tear fathers and children apart in secret family courts, then make tens of thousands from the same fathers for their Legal companies to try to get them access.In my own case I intercepted a letter from my wife's solicitor which said 'my real concern with the father being granted shared residency is the effect it will have on your settlement'

The legal system is corrupt.