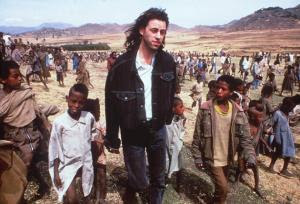 What do you get when you add up ;

= a world of the super rich whose income ensures that tens of millions around the world have to live in poverty.

Band Aid was nothing more than an attempt to assuage their own guilt over their vast wealth, for the crass super rich celebrity lifestyles they live, such as Bono flying his hat from Ireland for a concert in Europe, means they squander millions on their pathetic celebrity lifestyles.

Posted by Defender of Liberty at 06:05

Plus the fact that Rabbi Geldhoffs daughters are degenerate, drug-raddled whores, held up as 'role models', like their father.

The loathsome ego-maniac Bono makes an appearance in this hilarious episode of South Park:

By "appearance" I mean he is a piece of crap - literally. If you have 22 minutes to waste check out the video link.