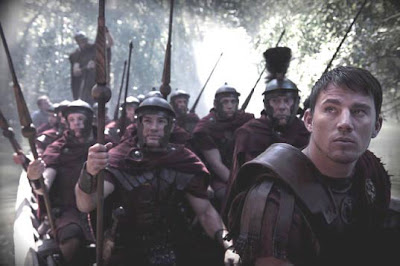 And now the tide of Empire turns anew,
In pain upon itself, retracting,
Contracting in chaos, as treason and war,
Threaten both city and senate itself,
And so the legions are ordered to return,
From Britannia’s misty mountain peaks,
Where they guard the suns distant gate,
High atop Antoline and Hadrian’s Wall,
And with standards raised, march East,
From worlds end at its Western Edge,
Where the woad painted Pict’s await,
As wolves await the fall of winter snow,
The ending of an age, the opening of a cage,
To hunt down every traitor that remains,
As an offering for the Wicker Man,
Watching in silence amidst wild woods,
As a flock of eagles, their wings aloft,
Abandon their eyries, turris and forts,
And seek the shore, heading home to Rome.

The majestic Hadrian's Wall is an awe-inspiring sight at the best of times.

But last night it took on a magical new light as 500 flaming torches were dotted end to end along the 84-mile long Roman fortification.

As night fell, a group of 500 volunteers holding gas-powered beacons and standing 250m apart created a 30 minute 'line of light' in a spectacle to mark the 1600th anniversary of the end of Roman rule.

Read more: http://www.dailymail.co.uk/news/article-1257842/Hadrians-Wall-lights-mark-1600th-anniversary-end-Roman-rule.html#ixzz0i9mRGYG2
Posted by Defender of Liberty at 06:16