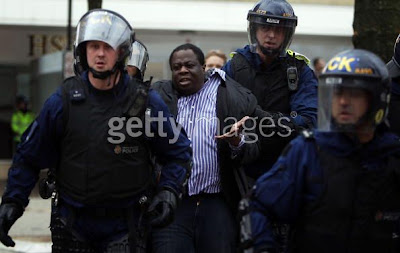 An anti-fascist campaigner has been charged after clashes involving police and thousands of protesters in Bolton. More than 1,500 Unite Against Fascism (UAF) and 2,000 English Defence League (EDL) supporters gathered in Victoria Square on Saturday.

UAF joint secretary Weyman Bennett was later charged with conspiracy to organise violent disorder. After being charged and released, Mr Bennett insisted he was grabbed by officers while protesting peacefully.

He said: "I have been to more than 200 demos and never been arrested. There is no evidence against me. This is not a good sign for democracy. Officers came up to me as soon as I arrived and said they would arrest me.

"They are hostile to anti-racists and there needs to be an investigation. Police neutrality needs to be questioned."


Yep. Weyman the maggot is still playing the race card, but the facts are now revealed about him and the UAF.

Next stop David Cameron - does he support the UAF and its leadership, now that they have been exposed as violent thugs and their leadership charged with a conspiracy to commit violence.

Posted by Defender of Liberty at 01:24

UAF terrorists (new definition the BNP needs to use) said...

Are they defined as a de facto terrorist organisation now?

a long list of arrests for violence and intimidation.

I think if they can define falsly without evidence that the BNP are fascist then shouldnt the BNP now be refering to thses people as from a terrorist organisation.

kind of take the shine of the anti fascist lable!

not many middle class muppets would want to get involved with that stigma attached, so comon what is stopping the BNP calling them what they are proven to be!

UAF yes have always been violent thugs signed up supporter David Cameron and many Labour MPs what will they do now? Will they condemn such violence, as they haven't yet....

There is no evidence against me. This is not a good sign for democracy.

right, you always augmented the intimidation , not a good sign for democracy , can you believe it when he whole reason for the uaf and your being was to silence the BNP for speaking the truth...

now the truth is seen about the fascist uaf...and those who support them

Not only is the 2@ playing the race-card but he's mourning the loss of his democratic right to be anti-democratic.
You couldn't make it up.
Perhaps a tap on the head, UAF style, with a claw-hammer might make him understand the concept of democracy.

It's good to see terrorists in the UK arrested, UAF are a terror organisation, by their very definition of spreading fear and terror for political domination.