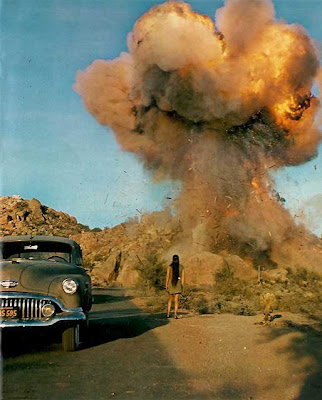 One of the great films of the late sixties is the movie ' Zabriskie Point '.

As a fan of the radical movies of the sixties and seventies such as Easy Rider, Electra Glide In Blue, Vanishing Point, Two Lane Blacktop and the classic horror movie The Car, I was looking forward to watching Zabriskie Point.

I was not disappointed.

Directed by Michelangelo Antonioni in 1970 it is the classic counter culture movie, but with a savage bite.

It shows the slow death of the counter culture as it embraced meaningless revolutionary violence against a government only too willing to kill its own dissidents and the simultaenous advance of the consumer society to somatise and tranquilise the masses into obedient consumption.

The very definition of futility is to use or threaten violence against a state and a military-industrial block willing to destroy the entire planet in MAD, Mutually Assured Destruction during the Cold War.

The system is predicated on violence and is in control because it uses violence.

The system will only collapse from the weight of its own internal contradictions, via an implosion of some aspect of the systems functions that then causes the whole system to undergo evolutionary change.

Our job is to prepare the political, social, cultural and economic foundations of the National Community that will replace the present system once it collapses, not to confront the system.

A single scene at the beginning of a security guard watching a row of cctv cameras filming people, whilst the boss listens in to a private conversation with a hidden microphone in his office, were the first signs of the coming surveillance state of contemporary society.

The scenes when Daria, the female lead of the movie, enters the junkyard where the feral children are running wild, and she is physically attacked by them, are horrifying.

They convey so powerfully the cruelty in children and the results of a society which does not enforce control upon youth. A society that lets children run wild will become a victim of them.

A single scene where a teenage boy is sitting in the dust plucking the strings of a smashed piano, as a upturned crashed car is in the background, conveys beautifully the final fatal crash of consumerism and the death of the American dream.

The little savages sitting in the dust amidst the remnants of our dying western civilisation are todays lawyers, proffessors, teachers, bankers and generals.

The Hippies not only sold out - they actually became THE MAN.

The Beast constantly assumes new forms to trick the people, but it is always The Beast.

For those of you who appreciate mood music, the track below is what I was listening too on the morning of the 911 attacks - the music conveyed a message in perfect synchronicity with the images being beamed live onto the TV.

The God Speed You Black Emperor track 'Dead Flag Blues' is a powerful peice of music, which is on a level with Zabriski Point. It also conveys the implosion of our culture and nations.


The finals scenes in the film are shocking.

The building in the final scenes has to be in one of the best locations, and one of the most palatial houses, in the whole world.

With a Pink Floyd soundtrack the end of the world is depicted in stunning slow motion footage.

For the final scenes visit here ;

The scenes of the exploding objects - the TV, the fridge, the books - all signify the destruction of the consumer society and how one day society will explode - either by the dropping of nuclear bombs or as a result of peak oil, crime, racial conflict, economic collapse, climate change etc etc.

The film should be watched now, in light of the collapse of the globalist system and finance capitalism.

It was a film so far in advance of its time, it is amazing.

Some films haunt the memory.

Zabriski Point is such a film.

The Black Emperor of Liberalism has arrived - Just in time for The End Of Days.

Posted by Defender of Liberty at 09:29

Thanks for the review Lee I'm going to make an effort to watch the film.

Speaking of movies, have you heard that the Dutch are going to prosecute Wilders for the movie "Fitna"?

This is an alarming development, an enforcement now of sharia law in the EU by criminal prosecution.

Wilders is saying that the legal fees invovled could ruin the party for freedom. When they've done with Wilders, who will be next?

The devastation caused by AID's is one of the self inflicted tragedies of liberalism and the philosophy of free love.

Liberalism is now in its final stage of dying and is enforcing its creedo's with inquisitions and imprisonmnets of dissidents - but the more reppressive it becomes, the faster its own internal contradictions will cripple it and bring it down.

The inner enemy are our own people who pass these laws and bring these prosecutions.

The price of liberty is constant struggle.

Certainly one of the most beautiful movies of that era.

But my Michelangelo Antonioni favourite, as well as one of my (two hundred) all time favourites, is "Blow Up", especially for the scences of a London long gone, or is it not?

Anyway, it catches the spirit and the atmosphere of that period even here in Sweden. The discotheques,
the music, the pre-hippie, rather snobbish dress style.