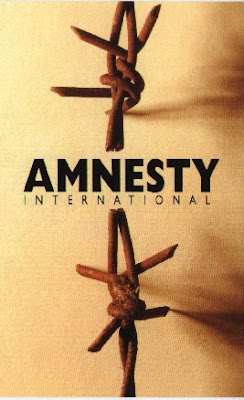 Amnesty international are accused of offering support for Mozzam Begg a former terrorist and supporter of the Taliban ;


Therefore I sent the following e-mail to Windey at the web address here ;

Send your own e mail to Amnesty and let me know your response.

In your statement on your website put up today you state ;

" Amnesty International campaigns for all internationally recognised human rights for all people – it is not about their views, their political opinions, their actions – it’s about upholding the universality of human rights: these are the inalienable rights of all human beings."

Can you therefore clarify why it is that Amnesty have never demanded the British government treat the civil, social, cultural and political rights of indigenous British people who are members of the BNP and who campaign peacefully in the democratic political process in the UK with the same respect as all other people, political parties and communities in the UK ?

Whilst the BNP and its activists have been singled out by the government on the grounds of their indigenous status and political opinions for bans on membership of the police, prison service and trades unions - Amnesty have said nothing in relation to these fundamental assaults on our rights and liberties.

Does Amnesty regard BNP members as human beings with human, civil, social and political rights or is the silence of amnesty related to the fact that we are regarded as sub-humans and therefore our rights may be removed and our community attacked, villified and denied our democratic rights ?

Seeing as your statement makes specific reference to political opinion could you affirm that the BNP are regarded as human beings and our rights of concern to Amnesty ?

I would like clarification on these fundamental issues as your response is of immense importance to the impartiality and integrity of Amnesty as a non-political and non-partisan organisation.

Posted by Defender of Liberty at 12:03

You could also have added in your questions: What is Amnesty's response to the latest legal attempt to force the BNP to open up its membership to all races, colours and creeds thereby denying the indiginous British people their right to freedom of association. And what is Amnesty's response to other organisations that exclude the native population, thereby exercising their right to freedom of association with their own kind.

Excellent point - why dont you e mail and ask them,

Excellent point - why dont you e mail and ask them,

http://www.journalism.co.uk/2/articles/537506.php
That would be the same Amnesty that is allowing the vipers mentioned in the attached link to hold their anti BNP meeting I expect.

Don't hold your breath waiting for a reply Lee.

But a good idea to post it on the main site.

In fact Lee i hope you get a much bigger role on the main site in general, I think we need a new team with lots of energy and fresh ideas.

Your posts have passion and wit, the BNP main site looks rather slow and drag with its content in comparison. almost like it has yesterdays news and yesterdays agenda.

you must know about this but here it is anyway.

Isn't there some law against Journalists lobbying against a democratically elected political party.

Needs wide readership I think another instance where the more Brits that see this the better.

more evidence I think that many of these anti BNP campaigns could actually work in BNP favour and some of them should be supported.

Maybe not this one but other Anti BNP campaigns seem potentially very counterproductive to me.

Nice One. Thats them in a corner

Another Amnesty "principle" is that those guilty of "hate "thought crimes are not worthy of their attention. As you know anyone who says or writes in public that they do not believe that millions of Jews were herded into gas chambers as a deliberate policy of nazi Germany is jailed in most of the countries of mainland Europe. All the people jailed are seeking the truth and express non violent opinions.Amnesty will not campaign for them.

Are you really that thick ?

Are you really that dim ?