The Met Police is Run By WANKERS 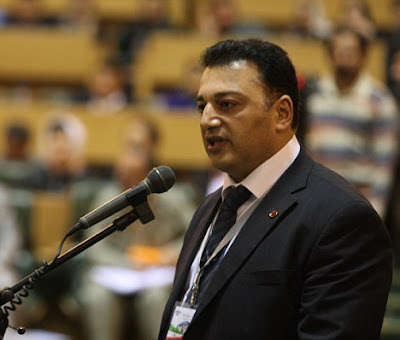 Image - Dodgy Dez in Iran addressing the Mullahs and Revolutionary Guards at a conference paid for by the Met and Black Police Officers Association ;

You could knit a few fucking jumpers out of that lot eh ha ha ha ha.

See this geeza behind me - he looks like a genetically modified mixture of Osama Bin Laden and Noel Edmonds wearing that fucking jumper ha ha ha ha.

Anywayz I was fitting this fucking geeza up see when all of a sudden I had a blinder of an idea. I took his hookah pipe off his key ring see, and jabbed meself wiv it. Right in the old belly.

I fought to meself 'I am a top rozzer and no fucker is gonna fink I am lying, Job done. Hes stitched up like a pair of Jordans plastic tits'.

Fuck me. I forget dont I that he aint a honkey.

If he had been a honkey I would still be in me nice fucking plush office, shagging me secretaries and aving it large wiv me black police officers association expenses account paid for by the Met.

No-one would have taken the word of a honkey over mine in the Met.

But as he aint a honky I was fucked werent I.

Never mind. At least I can grow a decent fucking beard like you lot eh. ha ha ha !

( P.S for the po faced people that do not like swearing the above is defined as satire )


I cant believe this.

Dodgy Dez whilst on PAID LEAVE after being CHARGED WITH A CRIMINAL OFFENCE was funded by the Met Police in order to go to Iran as a representative of the Black Police Officers Assocation.

On wonders why the BPA sent a delegate to a conference in Iran !!!!

I thought they represented BLACK BRITISH police not Iranians in Iran !

What the hell does the BPA have to do with Iran !!!

Why were the BPA sending a man charged with a serious criminal offence as their representative to this insane junket ?

WHAT THE HELL IS GOING ON AT THE MET ?

IS THE MET RUN BY INSANE IDIOTS ?

We dont need to answer that - we know the answer dont we.

Dezaei was an ethnic copper and there was one law for him and other ethnics and one for white coppers.

What a joke the Met Police is.

Last night Scotland Yard said of its £590 payment towards the cost of Dizaei's trip: 'Ali Dizaei travelled in his capacity as a member of the National Black Police Association.

'In line with long-standing staff association agreements, funding may be provided in part by the Met to support their activity. At the time of suspension, the Metropolitan Police Authority as his disciplinary authority agreed to Ali Dizaei continuing his work with the NBPA.'