The EDL and Lancaster Unity - almost beyond satire 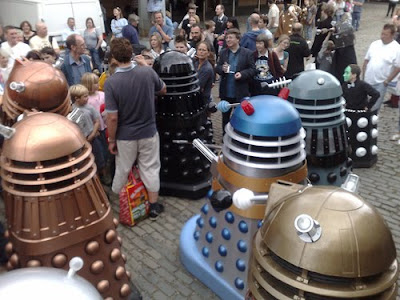 Image - EDL demo in London. Note the daleks who are really the EDL in disguise.

Normally I dont bother with ripping the piss out of Lancaster Unity as they are an utter irrelevance, but the latest article on their site is so absurd, hysterical and over the top its like it was written as a joke.

It is obvious that the UAF / Lancaster Unity / AFA are absolutely gutted about at being smashed off the streets by the EDL and now their strategy is to simply scream, whine, piss, bitch and moan to the old bill and any bent politicians they can to try and ban EDL demonstrations.

Its like watching a toddler have a tantrum that one of the bigger boys has taken over their sandpit.

Anyway, it will be difficult but I will attempt below to satirise the latest post on Lancaster Unity by 'Bradfordian' ;


EDL to Trigger WW3 and End of the World.


On Sunday the 30th of May 2010, a group of patriots of all races, religions and creeds called the EDL will march from Bradford Interchange Railway Station to the Turls Green Lloyds Bar (Wetherspoons) in Centenary Square, the exact site of the Asian rioting nine years ago, and their presence in the area will then trigger earthquakes, a plague of locusts, meteor strikes and itchy cases of genital thrush, whilst their very presence in the area will literally destroy what remains of Bradford's undeveloped city centre.

Visits to Manchester, Nottingham and Stoke by the UAF have all resulted in widespread disorder, with arrests for various different crimes, but the anti-racist campaigners involved in violence during their anti-EDL demos have been let off by the police forces who have failed to arrest UAF mobs for openly chanting racial abuse in public and randomly attacking white passers by as they did in the Birmingham anti-EDL demo.


If the forces of law and order were, by negligence, to fail to arrest UAF thugs shouting the words "white bastards" in public, the West Yorkshire Police would once again be viewed by everyone as taking sides with the UAF resulting in Bradford's final riot, as after this (non-riot that hasnt happened yet and unless he has a crystal ball he is talking bollocks) the earth will explode into little bits of rock the size of smarties and Bradford will be catapulted onto the surface of the moon.

It has taken years for Bradford's multicultural communities to re-write history concerning the last race riot and blame everyone but themselves, and since then, public enquiries have been fiddled, fake reports written, and new community initiatives have been conducted to help fund the race relations profiteers and extortionists, but much of Bradford's city centre has failed to recover from the petrol bombs flung during the riots. Shops still lie empty, pound shops and charity shops all that remains of a once-thriving city centre economy, all destroyed by this useless Labour government. Half of Bradford's city centre now resembles a bomb site, since the conservative-liberal democrat coalition allowed the Westfield Shopping Centre to collapse, and the Odeon row rumbles steadily on, public discontent with Bradford Metropolitan Council at an all-time high.

Thats what you get when you vote for any of the Establishment parties - so you really should vote BNP.

Trevor Kelway and millionaire far right backer Alan Lake have obeyed the laws of the land which allow static political protests, including their peaceful ones attacked by the UAF and Islamist mobs such as in Birmingham in 2009. The actions of the UAF are anything but peaceful, and compared to the terrorism of Islam4UK whose members have been involved in terrorism all over the world and In Britain, they are a much greater threat to both community and public safety with their rampages of uncontrolled physical force, and yet, despite regular complaints from anyone who actually witnesses the violence of the UAF the Labour Party controlled ACPO bent cops continue to turn a blind eye to their violent communism.

Conspiracy theorists have argued that the EDL are in reality Daleks in disguise, and the government is utilising their presence on Earth as a way to keep people watching TV and not eating chips. The EDL by keeping Islamists in their place are ensuring the War On Terror is fought here in Britain in our streets not just in Afghanistan and Iraq, and they are defend our democracy from the fall-out of the Iraq enquiry, which was to increase the numbers of Islamists on British streets.

For their lawful actions which include shouting a lot and waving flags, being attacked by the police, being attacked by Islamists and UAF Communists, the EDL are the real democrats, whilst the UAF could be banned in a matter of minutes, however Britain's far left groups are never ever banned, regardless of the crimes they perpetrate including bombing Harrods and attacking people with hammers. This sadly is a historical fact which leads some people to suspect the UAF are state-funded either by special branch or MI5/6.

Bradford mosques have raised £5000 for the floods in Cumbria which is commendable, but compared to the massive amount of money raised for the Pakistan earthquake from mosques in Bradford which was over 1 million pounds, which included a £20,000 donation from the local council which has not been given to the people of Cumbria in this case by the council, thats really quite small change.


If the Prime Minister, the Home Secretary, Bradford Council and the West Yorkshire Police insist on allowing the EDL the freedom to use their democratic rights in Bradford under the premises of "free speech", officialdom will be upholding the law of the land.. It will be the UAF and Islamists that cause any violence by opposing the EDL and their democratic rights that will be soley responsible for allowing another race riot to happen. A preventable race riot, if the government and intelligence services do their homework. All Bradfordians (regardless of race or creed) were hoping to never to live to see race riots in their own backyard ever again, but unless the UAF are banned from gathering, another riot will most definately ensue, triggered by the explosive actions of an army of communist thugs and hardcore Islamists attacking Lloyds Bar, before rampaging through Centenary Square en-masse.

Bradford has sadly become internationally synomymous with racism and riots, an image impossible to shake-off, and unless the UAF are prevented from gathering in Bradford under emergency laws the city's image as a hotbed of racial violence and disharmony will persist for an eternity or at least until the chippies use the newspapers up. If record numbers of UAF communist thugs turn out, defiling Bradford with their raw hate, a million pounds of police budget will not be enough to prevent sporadic violence from kicking off big-time which is what the UAF want and have planned for. At previous events, the police have taken a softly-softly approach towards UAF rioters, with minimal arrests.

If ineffectual, hands-off policing allows the UAF mob to do as they please, and Islamist vigilantes take to the streets to attack white people again as they did in Birmingham in 2009, anything might happen including a full scale Dalek attack on earth. An emergency government or police ban is an absolute necessity to prevent World War III from erupting in Bradford and the end of the world coming about, and revealing the joke that is 'race relations'. Bradford is a city scarred by mass immigration with a young, diverse population of Islamists.

If the EDL are allowed to make us look like mugs again, as they have done at every demonstration where the UAF have attended, we will cry.

Thats why the police, UN, EU, CIA, KGB, NATO, MOSSAD and U2 must all work together to stop the EDL having their demo or else the whole world will explode, the sun will go out, aliens will invade and the Daleks will rule the earth.

I am now presently being held in a secure mental institution after being sectioned, so please e mail Ketlan at Lancaster Unity and Denise can smuggle me in your e mails or beam them to me telepathically.

We have to challenge the EDL to a debate and i put Lee forward as our debating champion, make sure it is filmed/recorded and placed on the internet.

we must cut this group of subversives off at the Knees, highjack their movement for ourselfs, or discredit it beyond repair.

It's time to take the gloves off before this state op becomes a monster.

In a age when members of the BNP can be arrested for handing out perfectly legal leaflets,the leaders of the EDL whoe's demo's have been responsible for hundreds of arrests and attacks on Police are still walking the streets.
Doesn't take a genius to work out that something isn't quiet right.