Loyalty to Zionism is Treason to Britain. 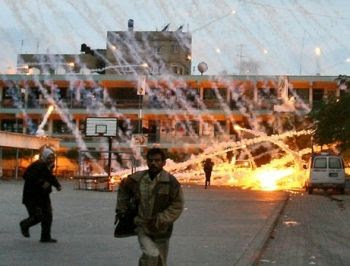 
I noticed on one English Nationalist site that I had been labelled ' an anti-semite' as I had attacked Zionism.

I am a British Nationalist first and foremost.

But Zionism is NOT a variant of Nationalism.

Israeli Nationalism recognises the Jewish nature of Israel, the Jewish culture of Israel and celebrates those things for Jewish Citizens whilst seeking to assimilate the Palestinians, Muslims and Christian communities also as Israeli Citizens on the basis of a meritocracy and equal civil rights.

Instead Israel increases land theft from Palestinians via the settlements, the Israeli state imposes racist laws against non-Jews and discriminates against Muslims and Christians.

Israeli Nationalism stands in direct opposition to Zionism, for Zionism is an Imperialist Project not a Nationalist project.

Most people are too thick to understand what Zionism actually is, so I will explain what it is here ;

It does not seek to defend Israel as a nation state as it is presently comprised or even its early borders as a nation.

The original form of Nationalist Zionism was based on 'Israel a Nation' with equal rights for both Jews and Palestinians in an independent Israel.

That has been superseded by an Imperialist Zionism.

The present extent of Arab lands owned and occupied by Israel would sicken many of the original Zionists, as would the treatment of Christians and Arabs in Israel at the hands of Israeli citizens today.

Zionism wants to establish a Great Israel by invading, occupying and ethnically cleansing the countries that surround it.

This comprises all of modern-day Israel, the Palestinian Territories, and Lebanon, as well as large parts of Syria, Jordan, and Egypt. The proportion of current Iraq, Saudi Arabia, and Turkey included in this territory is debatable.

At the same time Zionism seeks to expand its power base and project it around the world via the corporate media and its Zionist supporters in Western nations.

It seeks a global tyranny of silence around its very existence.

Those that dare mention its existence as a conspiracy are called anti-semites, when in fact the majority of the people that run the global Zionist network are not Jews at all.

These Zionists are not a race, a religion or a single group.

They are Republicans and Democrats, Tories, Ukip, Greens, Liberals and Labour.

They are united only be their support for the Imperialist Zionist project.

That may be because they are fundamentalist Christians obsessed with 'Rapture Prophecy', Muslim royal families that wish to see Iran and Shi'ite influence checked in the Middle East in order to secure their unstable monarchies, Russian crooks who see Israel as the 'home in the sun' after the Fraud Squad come knocking ala Dame Shirley Porter, American Christian and Jewish lobby group supporters, American and Jewish media barons or white liberal and leftist groups.

Each support the Zionist Project.

They define all criticism of Zionism as anti-semitism in order to defend the interests of the Zionist Project.

It denies not just the rights of the Palestinians to live on their own lands in their own homes, but also denies all indigenous Arab and other peoples of Greater Israel too the same rights over their own lands - if it ever achieved its long term goals.

The Zionist Israeli state that expelled the Palestinians would do the same under a true Zionist government to the lands of the people it invaded.

Zionists put the interests of Zionism before their own country and their own people.

Zionists owe no loyalty to Britain or the British people, as they serve only the interests of Zionism.

Zionists in the media like Melanie Phillips, Peter Hitchens and Gerry Gable attack the BNP for being 'racist' when we say we are trying to defend our nation from the interests of Islamist terrorism.

The same Zionists in the British media that support the Israeli state sending out assassination squads all over the world ( and showing their thanks for our unstinting support by using fake British passports as a cover for their death squads probably bought from some 'enricher' in the Passport Office for a few quid. thanks lads) attack the BNP as 'racists' for saying we would deport those involved assisting, funding or facilitating Islamist terrorism in the UK !

The actual terrorists we would hang of course.

But note the 'disconnect' in their logic.

Israel stands for a 'Jewish Nation for the Jewish people' and thats fine and democratic and all that.

The BNP say we stand for a' British Nation' for the 'indigenous British people', then we are called racists !

Left, Right, Liberal, Socialist, Capitalist and Anarchist are all united in defence of the Zionists.

They all unite to call any 'Anti-Zionists' as 'Anti-Semites'.

Thats because they all serve the interests of the Zionists.

The Zionists are the inner enemy, the usurpers of our liberty and security.

Loyalty to Zionism is treason to Britian.

Zionism threatens not just Britain, but also Israel itself.

The same psychosis that allows British Jewish organisations like the CST and Searchlight, both Zionist front groups, to label the 'Far Right' as the main threat to the Jewish community in the UK and minimise the threat from Islamism, the same Zionists in the UK also seek to drag Israel into the insanity of another war and get Britain to assist in such a war if required - this time with Iran.

The same media machines that beat the war drums for Iraq and Afghanistan are now beating them for Iran.

The stupidity of Zionism is of immense historical importance.

Hamas was once funded and supported by the Zionists in Israel as a way to undermine the PLO.

Zionists killed a generation of Arab-Pan Nationalists who had negotiable political and national aspirations and assisted the growth of radical Islamist groups like Hamas that had insane theological aims of establishing a global caliphate.

Israels main ally at this time, AMERICA, was also busy setting up, running, providing guns and stinger missiles too and funding Osama Bin Laden and Al Qaeda in Afghanistan.


Zionists are dangerous because they are so stupid.

We have had enough problems from Zionist Blowback.

Politicians obsessed with religion, start wars based on eschatology.

Bush and Blair used to kneel and pray together.

Even the Saudi Arab oil hedge funds and private trust funds that have bought into the major media groups over recent years are Zionists - they also seek a war with Iran in order to weaken and destroy their Shi'ite enemies.

Imagine the numbers of refugees we would get into the UK if Iran was bombed and a nuclear radiation spillage swept the area.

Bush thought the attack on Iraq was an order from a god.

Zionists in the media merely peddle their war propaganda, or the propaganda of whatever Zionist corporate elite controls the levers of media power at any one time.

Zionism if it starts a war in the Middle East with Iran could trigger an apocalypse.

An irradiated Iran would destabilise the entire planet.

The threat of Zionism is the same as with Islamism, they are existential threats to the survival of the West.

Therefore the influence of Zionism within our society must be defeated as much as the threat of terrorism from Islamism if we are to ensure the completion of our National Revolution.

Loyalty to Islamism is treason to Britain.

Those who call you anti-semetic are idiots who do not understand what they are talking about.

Mossad do their business in Dubai with the arrogance and behaviour of the gangster. After all isnt that what the middle east is about? A modern day gangster turf war.
The irony of course is that Hamas was originally set up by Mossad as a rival for the PLO.
Watch the British Government squirm as they will pledge a full investigation into the use of British passports by these criminals, and then their subsequent dropping of the investigation if it gets too close to the CIA/Mossad

The program's got its claws into everything..
The "Anti-Fa" in Australia are hard-core Zionists whose purpose is to destroy any Nationalist sentiments via the manufacture of guilt over our own existence and the "approval" of appropriate self destructive behaviour.

I think you are right to denounce any threat to Britain's self-governance, Lee, whatever its source.

But it's important to realize that any Jew who constitutes such a threat is out with his own scriptures:

"And seek the peace of the city whither I have caused you to be carried away captives, and pray unto the LORD for it: for in the peace thereof shall ye have peace" Jeremiah 29:7.

This is not true of Muslims, of course, or papists (e.g. Adams, McGuinness) for that matter. Both are church-state systems that aim at man-made global domination in their own ideologies.

The distinction should be kept in mind. I agree that any Jews who've forsaken the command of Jeremiah 29:7 and have gone over the Jesuit/Marxist 'dark side' by making "a covenant with death, and with hell" Isaiah 28:15, 18 should be resisted.

But such resistance should never go beyond that limit.

The consequences for any nation that disregards that warning are disastrous, as this item shows.

The book Middle East Diary 1917-1956 by Colonel Richard Meinertzhagen, Royal Fusiliers and WW1 veteran, is also most helpful in getting everything into perspective. The colonel was an English officer, non-Jewish, of Danish extraction. He served on General Allenby's staff and was a firsthand witness of the disastrous aftermath of WW1 that led up to today's Mideast crises.

Intersting that the daily Mail s report drew a lot of comments which didnt place israel in a favourable light and they were green arrowed by hundreds. Obviously drew the wrath of the the organ grinder who had the comments section removed.
"nothing to see here just move on folks"

If David Duke would limit himself to blacks and refrain from mentioning Jews, he probably would not experience opprobrium.

Being philo-Semitic no longer buys you protection in the US:

I never knew this